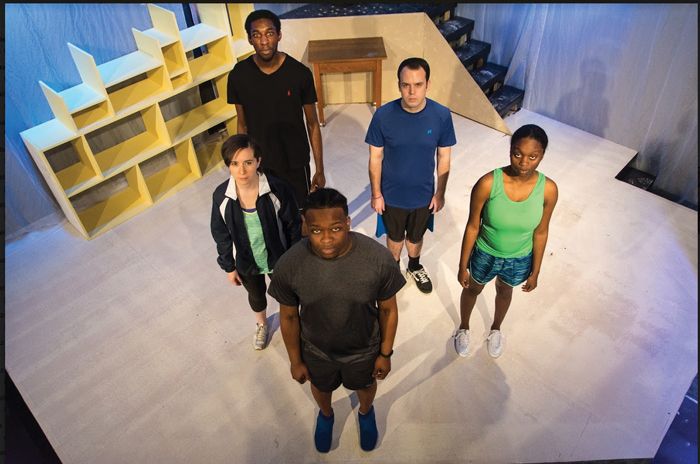 By Ada Valdez for LSt

In this drama, audiences witness the misuse of power, the uneven distribution of the American justice system, and college miseducation as Marcus, a young black college student, fights for his rights. In a prime college and deflated town that is struggling with class and racial tensions, things are about to heat up.

Running On Fire is a brand new original play written by Aurin Squire, screenwriter and journalist. Aurin Squire will be the Artist-in-Residence at Lee Street theatre April 11th – 20th. He has published numerous plays which have won national awards and his works have been produced nationwide. Recent awards include the 2017 Helen Merrill Prize for Emerging Playwrights and the Emerald Prize from Seattle Public Theatre. Squire has completed multiple fellowships including those with The Juilliard School, The Dramatist Guild of America, National Black Theatre and Brooklyn Arts Exchange. He has conducted residencies at the Royal Court Theatre in London, Ars Nova, and Lincoln Center Lab. Some of his screenwriting work can be seen in NBC’s This is Us, CBS’s Brain Dead, and CBS’s The Good Fight. Squire has been a reporter for ESPN, The Miami Herald, FUSION, and Chicago Tribune.

“Rather than running to something lighter or more new, maybe this play offered me an opportunity to transform the glut of news into art,” Aurin Squire mentions his motivation for writing Running on Fire. “I had written several stories about Black Lives Matter and brutality. Furthermore, I had a few plays in pocket that addressed the same issue. A major part of my artistic and journalism output was devoted to a topic that offered a steady stream of depressing news. Winding up the year we talked about projects we wanted to work on or were afraid of and I brought up the idea for Running on Fire. My main fear was that I felt exhausted.” Squire credits Juilliard professors, Marsha Norman and Chris Durang, for their encouragement of his idea. Their message “that sometimes when we feel exhausted is right when we have a breakthrough,” gave Squire the final push he needed to pursue this achievement.

We also encourage you to attend “Inside the Playwright’s Studio” on Thursday, April 12th from 11 a.m. to noon. In collaboration with Catawba College Theatre Arts, Lee Street theatre will host this educational program. We invite you to engage in this discussion as Aurin Squire answers audience questions and discusses his career which has taken him from Los Angeles to New York City. Aurin Squire will also conduct a Playwriting Masterclass on Sunday, April 15 from 10 a.m. to noon. Both special events are free and open to the public. They will be held at The Florence Busby Corriher Theatre at Catawba College, 2300 W Innes St.
For questions or more information visit www.leestreet.org or call 704-310-5507.