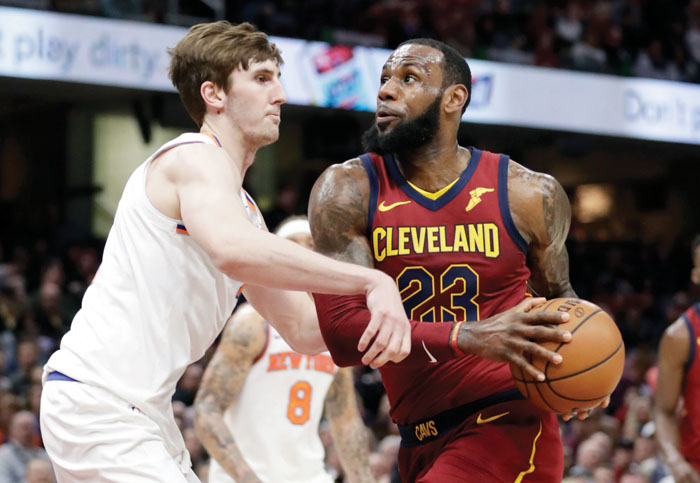 CLEVELAND (AP) — The trades, dysfunction and months of madness are all behind the Cavaliers.

A new season lies ahead. The one that matters.

LeBron James played in his 82nd game, scored 10 points and then got some rest for the playoffs as the Cavaliers concluded a “crazy” regular season with a 110-98 loss on Wednesday night to New York in what was likely Jeff Hornacek’s last game as Knicks coach.

James had never played every game in his 15-year NBA career. But the 33-year-old capped a remarkable run in which he seemed to break a record every night by adding another accomplishment to his long list of achievements.

And now he’ll try to get to his eighth straight Finals and win a fourth title with a team that looks nothing like it did in November.

“We’ve got a chance,” James said. “We’re one of 16 teams that have a chance to win a championship. That’s all you can ask for.”

Cleveland’s season included injuries, a heated team meeting, a roster overhaul at the trade deadline and Lue being forced to take a medical leave after experiencing chest pains.

“It has been pretty crazy and you know through all the craziness and the different moving parts and moving pieces, I thought we did a good job of just staying together,” Lue said. “I think the new group came in and I like the way they kind of came together the last 15 games of the season. All of that is behind us now and I just want to look forward to going into the playoffs.”

He averaged 27.5 points and set career highs with 9.1 assists and 8.6 rebounds. James also surpassed 30,000 career points, started his record 14th straight All-Star game and fueled the debate over whether he has surpassed Michael Jordan as the best player in league history.

Before the game, Lue said he tried to talk James out of playing, but he gave in and allowed the four-time MVP to extend his record of scoring in double digits to 873 consecutive games before taking him out. James finished with 10 points and five rebounds in 10:33.

From here out, he won’t be sitting much.

With Philadelphia beating Milwaukee, the Cavs are the No. 4 seed in the Eastern Conference playoffs and will face Indiana in the opening round. The Pacers went 3-1 against the Cavs this season.

Meanwhile, another rocky season in New York is mercifully over.

The Knicks (29-53) got off to a solid start but never recovered after losing All-Star Kristaps Porzingis to a torn knee ligament. Hornacek is still under contract, but isn’t expected to return for a third season.

One of the league’s most storied franchises remains aimless. The Knicks have missed the playoffs five straight years and lost at least 50 games in each of the last four.

“Jeff is a good guy,” forward Michael Beasley said. “He played the hand he was dealt. It’s difficult to do anything because all you’re thinking about is not to mess up.”

The Cavs swept the Pacers in the first round last year, but Lue warned this is a different Indiana team.

“They’re a team that beat us 3-1 and we know they play fast,” Lue said. “(Victor) Oladipo has had an amazing year and I think the biggest thing is (coach) Nate McMillan, I think he definitely should be considered for coach of the year. When they traded Paul George and brought in Oladipo and (Domantas) Sabonis and those guys, they just said they would be fish in the bottom of the East.

“They’re fifth in the East and they’ve been playing well all season and you gotta really commend Nate for what he’s done with that team.”

Cavaliers: Re-signed F Kendrick Perkins for the remainder of the season. Lue believes Perkins, who was on Cleveland’s 2015 Finals team, will be a positive influence on the team’s big men in the playoffs. “He’s always preaching the right message, it’s all about team, when guys miss defensive assignments he calls those guys out,” Lue said. … Perkins said a stint in the G-League was “very humbling.” Perkins recalled some 12-hour bus trips, cramming himself into plane seats and staying at hotels not exactly up to NBA standards. “It wasn’t the end of the world,” he said, “but it wasn’t just like heaven, either.”

Cavaliers: Face Indiana in the first round for the second straight year.