Gold in the hills for England cyclist at Commonwealth Games 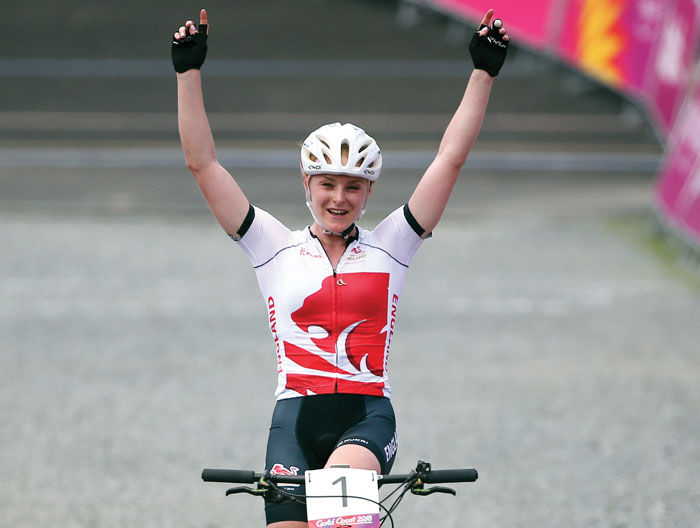 In later finals, teams from Australia and Canada were meeting in both the men’s and women’s beach volleyball gold medal matches, and the track program featured a marquee 200-meter matchup between Olympic sprint champions Elaine Thompson (100 and 200 gold at Rio) and Shaunae Miller-Uibo (400).

In morning preliminaries at the track, two-time Olympic champion Caster Semenya continued her quest for a 800-1,500-meter double when she posted the fastest time in the heats of the shorter race. The South African flag bearer won the 1,500 in a games record time earlier in the week and won the first of three 800 heats in 1 minute, 59.26 seconds.

Alexandra Bell of England and Eglay Nalyanya of Kenya posted personal bests to finish second and third in the heats. Kenya’s Margaret Nyairera Wambui, the Olympic bronze medalist, advanced as the winner in the second heat in 2:00.60.

Valerie Adams kept alive her bid for a fourth Commonwealth Games gold medal in the shot put when she posted the leading mark of 18.52 meters in the preliminaries.

Here’s some other news from the games:

Bermuda’s Flora Duffy is the No. 1-ranked women’s triathlete and won the sport’s sprint event at the Commonwealth Games last week. Her strong point is cycling, so much so that she entered the mountain bike competition.  But after a quick look at the course, she decided against it.

“Unfortunately I will not be racing the women’s mountain bike event,” she tweeted. “A tough decision, but after riding the course I felt there was too much risk for me personally.”

She’s competing in the ITU’s World Triathlon Series event in her home country of Bermuda on April 28.

Anti-doping officials conducted more than 3,000 tests ahead of the Commonwealth Games in an effort to weed out athletes who might be cheating well ahead of their competitions.

David Sharpe, chief executive of the Australian Sports Anti-Doping Authority, said 2,600 tests were conducted on Australian athletes and 500 more on international athletes, some of whom were only at the qualifying stage for the April 4-15 games on the Gold Coast.

The testing led to pre-games sanctions for some athletes.

Dr. Mani Jegathesan of the Commonwealth Games Federation’s medical commission said doping samples from athletes at the Gold Coast Games would be stored for 10 years in order to be available for later retesting.

Jegathesan said anti-doping authorities took into account the “risk element” and used intelligence reports so that “every test counts.”

Officials would not say how many tests were being conducted during the games.

A men’s squash pairing from Sierra Leone are the latest athletes to miss their event at the Gold Coast games. Sierra Leone’s Ernest Jombla and Yusif Mansaray did not appear for their doubles match on Thursday morning. Their absence meant India’s Ramit Tandon and Vikram Malhotra got a walkover in Pool F.

Games officials confirmed a Rwandan athlete, two Ugandans and potentially one Ghanaian had also left the village without notifying team officials and their whereabouts was unknown.

Cameroon officials earlier revealed eight members of the 42-person squad had gone missing, including two boxers who failed to appear for their events.