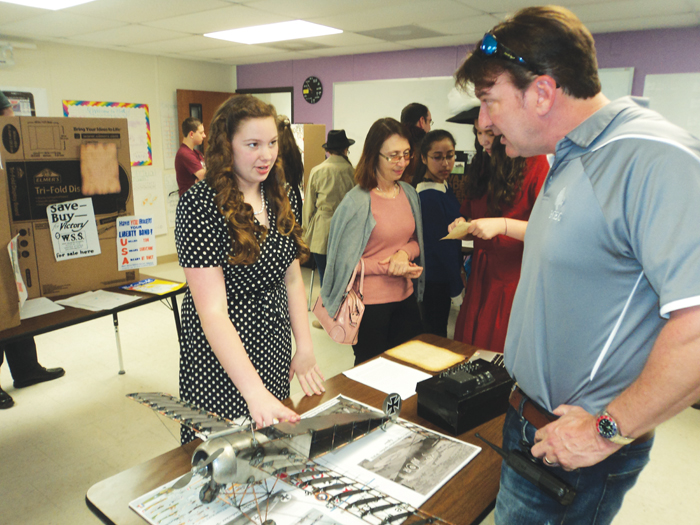 Submitted photo Student Julie Stubbs shows her principal, Patrick Hosey, her replica plane. Julie and her father used a plasma cutter to make the parts and welded them together.

What do you do when your students are going on a field trip that includes the World War exhibit at the North Carolina History Museum in Raleigh? The answer for the Rowan County Early College freshman team is to plan individual projects that align with the trip and curriculum.

The students were presented with project options on subjects ranging from Archduke Franz Ferdinand to Dunkirk. All students had creative license to present their topics with one catch: they first had to write a research paper and dig deep into their topic.  They were told to expect questions from veterans, parents and the community.

The early college students rose to the occasion and presented their projects publicly on April 6 to an audience that included school board members and former teachers.

The World War Day projects were on display along with their research and one additional literary element. The students were required to write a letter to or from the “homefront”as if they were living during the time of the war. Many students said that this made them think creatively about what it must have been like to write letters that might take weeks to travel back and forth. This was an eye-opening experience for students used to instantaneous texts and emails.

Student Shelby Walters started her project on Woodrow Wilson and then changed to a topic she thought would be more engaging for her — her great-grandfather, Floyd Freeze Daughtery, who was a tailgunner on a B-17 during World War II. Daughtery flew over Dresdan, Germany, on Feb. 15, 1945.

Daughtery’s uniform has been on display at the Price of Freedom Museum. Shelby’s grandmother made a call and the museum loaned the donated uniform back to the Walters family for World War Day at the early college. It made Shelby proud that she could wear her family heirloom. Shelby learned how much of an impact her great-grandfather’s life had for her country and family. Shelby’s display board included articles featured in the Salisbury Post.

Shelby is not the only one who wore a family heirloom. John Coello wore his father’s formal attire from the Marine Corps from 1977. John was really proud to wear his father’s “dress blues” because his father, grandfather and brother-in-law all served in the Marines. John’s project was on the Battle of Iwo Jima. He came away with a sense of what troops went through for our freedom.

Student Smith Ballard wore his father’s Navy uniform. He was excited to feel the pride his dad must have experienced when he wore it. Smith did his project on military uniforms and learned there was a wide variety of uniforms that served different purposes.

Alyx Carmichael did her project on the bombing of Hiroshima and Nagasaki. She said her topic was especially hard because it dealt with death, but it was good to learn world history and the “why” behind historic events.

She wore a traditional Japanese kimono that added to her “real world” experience. The kimono was a gift to her teacher from a fellow educator in Seattle, where she studied Asian immigration with the National Endowment of the Humanities. Alyx wrote her historic letter as if she were living near Nagasaki after the bombing and checking on family. The letter-writing experience was meaningful for her because she transferred information from research and applied it to the letter to make it more realistic.

Below are some personal reflections of the students about their research, letters and projects on World War Day.

• Oriana Reed: I did my project on the Navaho Code Talkers. I found out through research that there were three tribes used in the war: Choctaw, Cherokee and Comanche. They transmitted messages through radio and telephone. They worked in 119th and 120th infantries of the military. They were the inspiration for the Navaho Code Talkers who were used in World War II.

They were used because the Navaho language was not well known and hard to learn if you were not Navaho, so it was good for transmitting messages that could not be “cracked” by enemies. In World War II, the Navaho Code Talkers were the most well known, but there were a total of 15, including the three previously mentioned tribes. This project was special for me because I related it to my heritage. I have always been interested in the topic, and the research project gave me an opportunity to expand on what I already knew.

• Chase Keener: During the war, when soldiers ran out of ammunition, they used Tootsie Rolls to fix pipes and repair things until they could get back to the base. The American “Candy Bomber” was a soldier that flew planes over war ruins dropping parachutes with candy to children ravaged by war. In my opinion, he did that because he had a good heart.

• Eric Garduno: Because I raise animals, I chose to research animals in combat. I focused on World War I. Dogs, horses and elephants were used during combat. Dogs were used to carry ammunition and medicine. Soldiers trained the dogs to retrieve injured men from the fields. Horses were used for ambulances and to haul cannons. If a truck had a flat tire, the horses pulled the vehicles. Only officers got to keep their horses after the war. Elephants had an advantage because of their weight and power. In battle, elephants elevated the soldiers to give them better aim.

• Monserat Salazar: I realized there are so many stories to be told beyond Anne Frank and the Archduke Ferdinand. We take so many of our opportunities for granted. Our education is widely influenced by our teachers and peers. During war times, children often had to work and did not have the opportunity to pursue their preferred career. We have the opportunity to better ourselves and our society. I wrote a journal based on the book “Stolen Voices,” a collection of children’s experiences during war. To a suitcase, I added the items that a child might take him when leaving his home country during war times. I included pictures of the children to give a face to their stories.