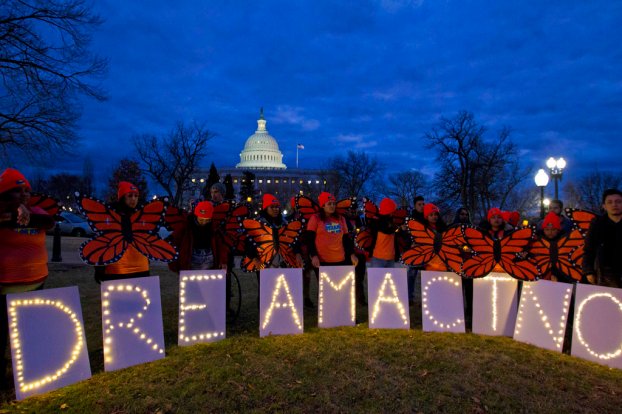 Demonstrators rally in support of Deferred Action for Childhood Arrivals (DACA) outside the Capitol Washington. An effort to protect young Dreamer immigrants from deportation never really had much chance of squeezing into the last bill Congress must pass this election year. (AP Photo/Jose Luis Magana, File)

Other Voices: Blame both sides on DACA

While President Trump blames the failure of any emergent DACA fix on the Democrats, a closer look reveals a more complicated situation.

Last September, Trump issued an executive order giving Congress six months to come up with a permanent, legislative solution to the situation of the up to 2 million young people who qualified for deferred deportations under President Obama’s Deferred Action for Childhood Arrivals program.

Trump’s reasoning for this was sound. The program, which shielded young people who entered the country illegally before the age of 16 and have lived in the U.S. continuously since June 15, 2007, among other qualifications, offered only temporary protections and was created by highly questionable executive fiat.

A March 5 deadline for the expiration of DACA as a result of Trump’s rescission of Obama’s order has since been rendered moot as a result of legal challenges by defenders of the program, and at least in theory gives Congress more time to actually come up with a fix.

Unfortunately, efforts to legislatively resolve the issue have consistently fallen short, despite widespread bipartisan agreement that it makes little sense for the United States to deport millions of young people raised, educated and integrated in the United States.

To his credit, there seems to be a kernel of truth in Trump’s version of events. Congressional Democrats have repeatedly threatened to hold up government spending bills if a DACA fix wasn’t included, yet they’ve inevitably and even predictably folded every time.

The bill, backed by President Trump and introduced by Sen. Chuck Grassley, R-Iowa, offered a path to citizenship for up to 1.8 million young people brought to the United States illegally as minors. In exchange, the bill called for an end to the diversity visa lottery program and restrictions on so-called chain migration.

However, a lot of Republicans didn’t vote for that bill either. The bill only mustered 39 votes in support with 60 opposed.

Trump’s insistence on an unpopular border wall and adding unrelated legal immigration restrictions into the discussion have done far more to prevent a DACA fix than an unwillingness on the part of congressional Democrats to compromise. We know this because Democrats did join Republicans in voting for two compromise bills to trade a DACA fix in exchange for additional border security measures.

The proposal that got closest — a plan put forward by the Common Sense Caucus to provide $25 billion in border security funding and prevent DACA recipients from sponsoring their parents for legal status — received the support of most Democrats and eight Republicans, in total receiving 54 votes in favor, 45 against.

For Trump to put the blame on the Democrats for the failure of a DACA fix might be red meat for his staunchest supporters to cover for his failure to get anything meaningful done on immigration, but it’s an incomplete narrative at best.

Jodie Trexler Laird of Salisbury went on the “Dr. Phil” show to dispel long-running rumors that she killed her sister,... read more