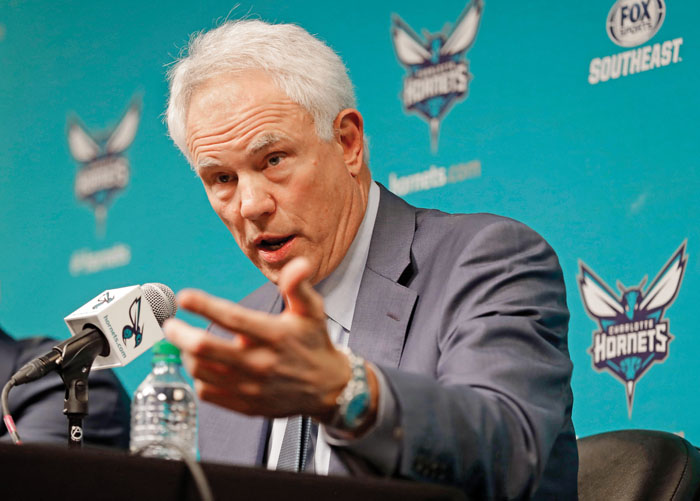 But just how he intends to help Charlotte get there remains unclear — for now.

The Hornets new general manager and president of basketball operations said during his introductory news conference Tuesday this is a job he coveted. But the 63-year-old Kupchak was vague when it came to pressing questions surrounding the futures of the franchise’s top player Kemba Walker, eight-time All-Star center Dwight Howard and coach Steve Clifford — as well as whether the team needs to undergo a complete rebuilding process.

“I’m limited in my knowledge other than what I have seen on TV and learned in the last 48 hours,” said Kupchak, who accepted the job on Sunday. No details have been released about the terms of his contract.

He helped the Los Angeles Lakers win seven NBA titles and has spent 30 years as a front office executive, including 17 as the Lakers’ general manager.

He hopes to build a winner in Charlotte too — with Jordan’s help.

“I don’t know why I wouldn’t seek out his opinion,” said Kupchak, adding that Jordan is arguably the greatest player ever to play the game.

Kupchak said Jordan is still very passionate about not only the NBA game, but the college game as well — and keeps up on the talent.

In Los Angeles, Kupchak inherited a roster from Jerry West where he acknowledged “the cupboards were full.”

Behind Kobe Bryant and Shaquille O’Neal, the Lakers became a dynasty.

Things are little different in Charlotte, which lacks the glitz of a big market like Los Angeles, the talent of a Golden State and the history of franchise like Boston.

Kupchak inherits a team with 10 players under contract next season leaving the Hornets close the luxury tax threshold — making turning over the roster a little difficult.

Charlotte’s most tradable commodity is Walker, who has played in the last two All-Star games and is making just $12 million a year with one season left on his contract before becoming a free agent.

Walker is the franchise’s all-time leading scorer, but he’s also stated that he would prefer to win playoff games rather than go through a rebuilding process.

“I like a player that doesn’t want to be somewhere where they’re going to lose,” Kupchak said. “ … I know he’s had an All-Star year. It’s tough to answer the question with any certainty.”

INDIANAPOLIS (AP) — Coach Nate McMillan wanted the Indiana Pacers rested and ready for the playoffs — even if the strategy cost them their regular-season finale.

So McMillan rested three starters and watched the Charlotte Hornets knock down 18 3-pointers and eventually pull away for a 119-93 victory Tuesday night.

“My message to them, it really shouldn’t look any different as far as how we play even though we have a number of guys out of uniform,” he said. “We wanted to give some guys an opportunity to get minutes. We were able to do that.”

It wasn’t the same — not even close.

Frank Kaminsky matched his career high with 24 points, Dwight Howard finished with 14 points and 17 rebounds and the struggling Hornets came up one 3 short of tying their season high.

Charlotte won for only the second time in its last seven games and ended a three-game losing streak in Indy.

But it was little solace for a team that has now missed the playoffs three times in four seasons and could be headed for a major offseason overhaul with new general manager Kupchak already in place.

“When you’re eliminated from the playoffs, you want to finish the season on a positive note,” Marvin Williams said after scoring 15 points and tying his career high with five 3s. “Coach (Steve Clifford) getting sick was a huge blow for us. Losing Cody (Zeller) was a big loss. When you lose guys who are significant, it is tough to bounce back.”

Somehow, McMillan took a young team that most expected to be in this year’s lottery, led it to 48 wins and the No. 5 seed in the Eastern Conference playoffs.

With nothing significant at stake Tuesday, McMillan put Bojan Bogdanovic, Victor Oladipo and Thaddeus Young on the bench and carefully monitored the minutes of other key players.

The result: Darren Collison, T.J. Leaf and Glenn Robinson III each scored 13 points in a game that was never really close.

“You grow up watching the NBA in the postseason. That’s where you want to play your best basketball,” Collison said. “There’s no greater feeling going with a team you enjoy playing with.”

Williams made four 3s in the first quarter to help Charlotte take a 37-25 lead and it was 63-55 at halftime.

Charlotte then used an 11-4 run to make it 79-63 midway through the third quarter and the Pacers never got closer than 12 the rest of the game.

Hornets: Howard finished the season with a franchise-record 53 double-doubles and joined Kareem Abdul-Jabbar and Wilt Chamberlain as the only players to hold single-season records with two teams. … Howard also is one of six players to average a double-double in each of his first 13 seasons in the league. … Malik Monk had 17 points and Nicolas Batum had 14 points, four rebounds and six assists.

Pacers: Domantas Sabonis had 10 points and 10 rebounds while Lance Stephenson wound up with nine points, 13 rebounds and four assists. … The Pacers played on Fan Appreciation Night in their “Hickory” uniforms and Stephenson signed his No. 1 jersey and tossed it into the crowd afterward. … Play was stopped briefly during the fourth quarter when a T-shirt landed on the court during play.

Oladipo and Collison must wait one more day to find out if they can win league titles for steals and 3-point percentage.

Collison was 3 of 5 from beyond the arc, improving his percentage to 46.8 percent. That gives him Indiana’s NBA single-season record, breaking Chris Mullin’s previous mark of 46.5 percent set in 1998-99.

Just how did McMillan decide who to play?

“I talked with the trainers, I talked with (president of basketball operations) Kevin (Pritchard) and I talked to our guys,” McMillan said. “Vic has a little tweak. Bogie has been playing for almost a year now, going back to last summer and Thaddeus has probably played more minutes than any forward in the league. So we needed to get those guys some rest.”

Pacers: A trip to Philadelphia or Cleveland for a best-of-seven, first-round series.

He said the same goes for the 32-year-old Howard, who rebounded from two lackluster seasons in Houston and Atlanta with a solid campaign this season for the Hornets averaging 16.7 points, 12.4 rebound and 1.6 blocks in 80 games played.

Howard played for Kupchak in Los Angeles when he was GM there, and Kupchak said he didn’t want the big man to leave for Houston as a free agent.

“He is as lively and energetic as I have seen him play in years and years and years,” Kupchak said. “I know next year is the last year of his deal so there is some uncertainty with some of the players going forward.”

Charlotte has made the playoffs twice in five seasons under Clifford, but has never advanced out of the first round. Clifford missed a large portion of this past season dealing with headaches related to sleep deprivation.

Clifford spent one season with the Lakers and Kupchak felt at that time he had head coaching potential.

But when asked directly about Clifford’s future with the Hornets, Kupchak struck a popular refrain, saying he just got the job two days ago, “so in all fairness I have not had the time” to assess.

As for whether the Hornets need to rebuild, Kupchak said, “I don’t know if that is the right word or not. I think our actions in the next three months might answer that question.”