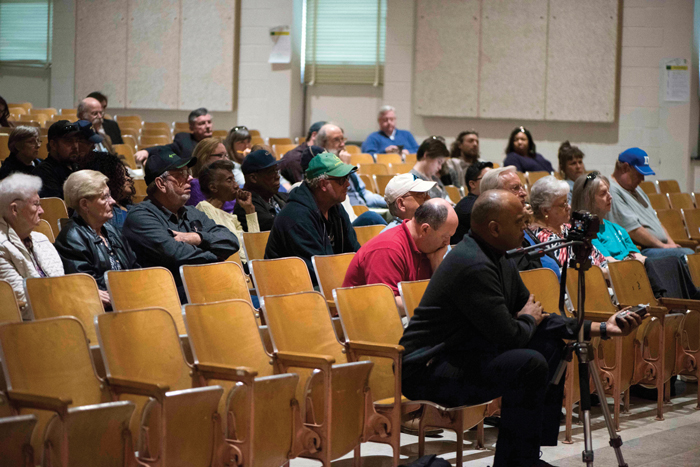 SPENCER — Neighbors and others voiced their concerns about Buck Steam Station on Tuesday evening on a final chance to talk with representatives of the North Carolina Division of Air Quality.

Those who spoke included  neighbors affected by the plant’s former operations, elected officials, activists, doctors and others.

All told, 19 people spoke during the public hearing about a proposed air quality permit that would allow Duke Energy to reprocess and recycle coal ash stored at the Buck plant.

Currently, the coal ash stored in three pits at the station has a too high level of carbon to be used in industrial materials like concrete. The reprocessing center will reburn the ash, effectively removing the excess carbon.

The hearing was held at North Rowan High School.

Many in attendance voiced concerns about the amount of potential toxins that would escape into the air.

“It’s inevitable that an emission will be too strong or that something will happen,” Sanchez said. “… The day-to-day process will produce all kinds of particulate matter. That’s concerning, especially if it’s going to be deposited into the watershed.”

Others raised concern about the potential harmful effects of the emissions and whether or not Duke Energy could be trusted to report problems.

“How will the coal-ash neighbors be notified when the emissions are not in compliance?” asked Deborah Graham. “Will it take another Dan River, but by air, before the affected people find out about a problem?”

Dr. Andrew Annand, a nephrologist in the area, said he sees patients affected by coal ash daily. Some of them are on dialysis, he said.

He called the idea of Duke Energy being responsible for monitoring and reporting emissions “the fox that guards the hen house.”

Representatives of Duke noted the benefits of the new plant. Mike Hughes, vice president of communications, said it would bring 100 to 200 new jobs during its construction.

After it is built, he said, there would be 12 full-time employees at the reprocessing center.

Some in attendance scoffed at that, saying the small number of jobs come at a cost to the surrounding community. Duke Energy, they said, is making a decision based on greed because the plant would generate a product for further company profit.

Erin Culbert, also a Duke Energy spokeswoman, said after the hearing that that is a misconception.

“Customers get the proceeds of the sales,” Culbert said. “When we sell ash as a beneficial product into a market, those proceeds go directly back to offset customer bills. The company does not retain any financial profits.”

The Division of Air Quality will review the public comments before making a decision on the air permit. If it’s granted, the company hopes to begin construction on the facility in May.