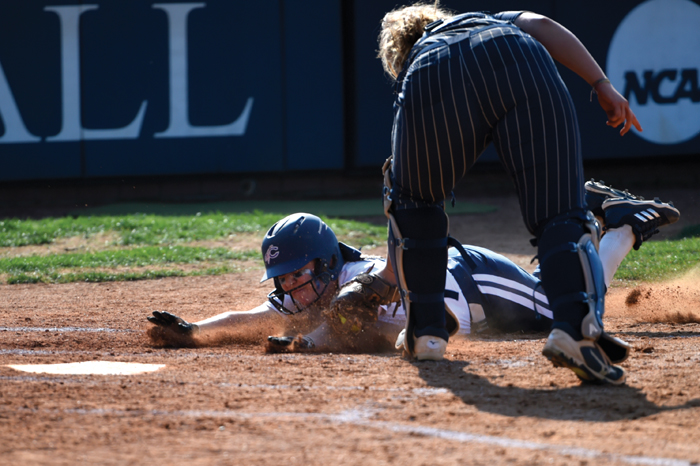 SALISBURY — Catawba coaches met in right field with their softball team for a marathon heart-to-heart after Wednesday’s doubleheader at Whitley Field.

Coaches preached about executing better. Players listened and nodded their heads in agreement.

Catawba wasn’t far from winning two games against Wingate. Instead Catawba dropped two, falling 4-3 and 4-2 to the visiting Bulldogs.

“We’ve got a very talented young group of players, we work hard, and we’ll keep working,” Catawba catcher Monica Taylor said. “But you have to find a way to execute. We had all kinds of opportunities today, but we didn’t finish.”

Catawba was enjoying a surprisingly strong season until the last two weeks. The Indians peaked with a doubleheader sweep of Queens on March 27. Since then, the Indians are 1-7 and they’ve fallen into a tie for sixth place in the league. Catawba (19-22, 7-9) is still in position to finish in the top eight to qualify for the South Atlantic Conference Tournament, but that’s no longer a sure thing.With four games left,  Tusculum and Wingate are only one game back of Catawba and both would win a tiebreaker with the Indians.

“This was a huge sweep for us today,” Wingate coach Lani Shaffer Reis said. “Injuries have set us back this year, and while I still can’t say we’re healthy, we are healthier than we were. We’ve just got to keep on fighting. If we can make the tournament, anything can  happen, and now we’ve got some momentum.”

Brooke Walser pitched exceptionally in both games for the Indians in relief. She gave Catawba every chance to come back, especially in the first game when she shut the door on the Bulldogs the last five innings.

Mikayla Hannah, a senior first baseman, was the prickliest thorn for Catawba. She homered in both games.

Wingate (18-24, 6-8) got a leadoff homer in the second inning from Hannah and led all the way in Game 1. Catawba had a defensive mistake later in that inning that allowed the Bulldogs to tack on three more runs, and the Indians were in a 4-0 hole.

Catawba was mostly silent against Wingate starter and winner Aubrey Reep until the fifth inning. That’s when freshman shortstop Jordan Dean lifted the Indians back into the game with one powerful swing. Her three-run homer to center field was majestic and followed a walk to Delane Smith and a bloop single by Taylor. Catawba was down, 4-3, and had all the momentum.

“I’ve been in a slump, so I really needed that,” Dean said.

When Smith squared up a mean-looking riseball leading off the sixth for a blistering double to the left-field fence, Catawba was poised to tie the game. Taylor was next. She went to the plate six times on Wednesday. The only weak at-bat she had came at the worst time. Reep got a ball in on her hands, and Taylor grounded meekly to the third baseman for the first out.

“I know I should have been thinking opposite field,” Taylor said. “At the very least, I needed to move the runner. I just didn’t have a good plan.”

With a base open, it seemed likely Reep would pitch around Dean, but Reep’s second pitch was in the strike zone. Dean just missed it, lifting a popup for out two. One routine grounder later, Catawba was back on defense.

Then the Indians went down 1-2-3 in the seventh and had to start thinking about Game 2.

Anything that could go wrong, did go wrong for the Indians in the second game.

Catawba starter Madison Hunter had a nasty change-up, but Wingate had good swings against her other pitches. Hannah’s two-run homer in the third — for a 3-0 lead — was the key blow.

“Our pitchers were struggling to hit spots, and Wingate got key hits,” Taylor said.

For Catawba offensively, there was a popped up bunt for a double play, a runner thrown out at the plate and failures to put balls in play. Catawba struck out seven times against Wingate reliever Rachel Weidner, who came into the game with a 2-9 record.

“It was so frustrating,” Catawba second baseman Taylor Martin said. “We got some hits, but we couldn’t string them together.”

Both teams scored in the first with, Smith driving in Catawba’s run on a sac fly. But Catawba, after loading the bases with no outs on an error, walk and infield hit, should’ve gotten more than one.

Carlee Brawley socked one off the fence leading off the second  for the Indians but was out trying for a double.

In the third inning, Kaylee Cook hit one off the right-field fence, Smith singled and Taylor doubled, but the Indians only got one run. Taylor’s double barely eluded a diving left fielder, so Smith got a late break from first and was nailed at the plate.

And so it went. Martin popped up a bunt for a double play after Catawba put the lead-off runner on base in the fourth.

The Indians went down quietly against Weidner in the fifth and sixth. Martin and Leah Huggins had seventh-inning singles, but Weidner didn’t blink. She ended the game with two strikeouts.

“Wingate executed today and we didn’t,” Dean summed up.

Catawba plays a non-conference doubleheader at home against Lander on Sunday before getting back to league play.

“This was a very tough day,” Martin said. “But we can’t let it affect us for the games we have left.”