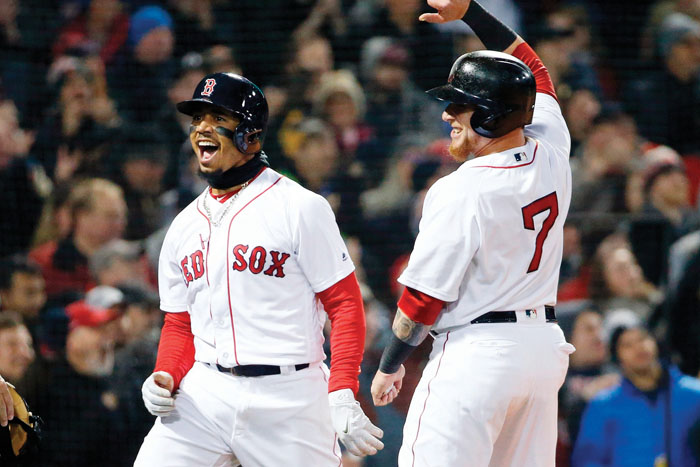 Boston Red Sox's Mookie Betts, left, celebrates with Christian Vazquez (7) after scoring on a triple by Andrew Benintendi during the second inning of a baseball game against the New York Yankees in Boston, Tuesday, April 10, 2018. (AP Photo/Michael Dwyer)

Betts hit a grand slam and scored five times, leading Chris Sale and Boston over the New York Yankees 14-1 Tuesday for its ninth straight victory. The Red Sox improved to 9-1 for the first time in franchise history.

Betts went 4 for 4 and drove in four runs. His third career slam cleared the Green Monster in left field and capped a nine-run burst in the sixth inning that turned the first matchup of the season between longtime rivals into a rout.

“I just got some good pitches to hit and put some good swings on it today,” Betts said. “I think just all of us putting together good at-bats kind wears guys down.”

Manager Alex Cora has been pushing his new team to be aggressive in the strike zone. He sat down with Betts this spring and showed the All-Star outfielder how effective he can be when he does.

“A slugger leading off,” Cora said. “He’s going to make contact. But now he understands that he can do damage in the strike zone.”

Betts joined Ken Griffey Jr. (1996) as the only players to have four hits, five runs and four RBIs in a game against the Yankees.

Sale (1-0) allowed one run in six innings, scattering eight hits. He struck out eight without a walk.

He said the run support helped him settle in.

“The biggest key is it just allows you to go out there and throw strikes,” Sale said. “You’re not too worried about making mistakes.”

Boston’s starting pitchers improved to 6-0 on the season on a night in which the temperature dipped into the 30s.

Hanley Ramirez went 2 for 2 with three RBIs. Andrew Benintendi added a two-run triple, along with a double.

Aaron Judge had three hits for the Yankees, a drive off Sale over the center field wall in the fifth for his third home run of the season.

Boston’s J.D. Martinez went 1 for 5, but had a two-run double in the sixth.

Yankees slugger Giancarlo Stanton went 2 for 4. He struck out his first two times up against Sale, and has now fanned 22 times in 46 at-bats.

“It’s good progress,” Stanton said. “We’ve got two more here, so pick up where I left off here today and get it going. “

He said his introduction to the rivalry was “cool.”

“Not a cool outcome, but it was cool to see the passion and what goes on,” he said.

Of Boston’s nine runs in the sixth, six were unearned.

Strasburg (2-1) allowed three hits and two walks while striking out eight, at one point retiring 12 in a row. He didn’t allow a runner past second base.

Ryan Madson allowed a two-out RBI double in the ninth to Dansby Swanson, but escaped the jam to earn his first save.

Brian Goodwin’s two-out single knocked in an unearned run off starter Mike Foltynewicz (1-1) in the fourth, and the Nationals added another run in the sixth when reliever Shane Carle overthrew first on Strasburg’s sacrifice attempt.

BALTIMORE (AP) — Aaron Sanchez lost his no-hit bid when Baltimore’s Tim Beckham led off the eighth inning with a sharp grounder through the legs of third baseman Josh Donaldson, and Curtis Granderson hit a tiebreaking homer in the ninth to carry Toronto.

Seeking to throw the second no-hitter in Blue Jays history — Dave Stieb did it in 1990 — Sanchez (1-1) gave up three hits in the eighth.

MIAMI (AP) — Yoenis Cespedes snapped a slump with a two-run double to break a tie in the ninth inning, giving New York the best 10-game start in franchise history.

The Mets (9-1) earned their seventh consecutive victory, their longest winning streak in two years. Asdrubal Cabrera hit a pair of solo homers for New York, which blew a three-run lead and then came from behind.

For the second night in a row, the teams drew the smallest crowd in the seven-season history of Marlins Park. Attendance was 6,516.

The score was 6-all in the ninth when Amed Rosario reached on a throwing error by third baseman Brian Anderson. Brad Ziegler (0-2) walked Michael Conforto, and Cespedes grounded a one-out double down the line just past Anderson.

Not even the presence of Sister Jean Dolores Schmidt, the 98-year-old chaplain of the Loyola basketball team, could help the Cubs. She threw out a ceremonial first pitch at Wrigley Field.

Corey Dickerson had three hits and two RBIs and Starling Marte also connected as Pittsburgh won for the fourth time in five games. The Pirates’ 8-2 record is their best 10-game start since 1992.

The Indians beat the Tigers for the ninth straight time.

Andrew Miller (1-0) pitched a scoreless eighth. Cody Allen worked the ninth for his third save.

Wilson (0-2) came in to start the eighth and quickly fell behind Perez.

Nola (1-0) gave up three hits while striking out six and walking three as Philadelphia won for the fourth time in five games. The Reds have lost three in a row.

Kingery connected with one out in the eighth off Tanner Rainey, who was making his big league debut. It was the second career homer for Kingery — he helped the Phillies beat the Reds 6-5 on Monday night by going deep.

The White Sox dropped to 0-5 at Guaranteed Rate Field. They have never lost their first six at home in franchise history dating to 1901.

Snell (1-1) didn’t allow a hit until Tyler Saladino’s double in the fifth.

Jose Abreu hit a three-run homer off Rays closer Alex Colome, capping a four-run rally in the ninth. Colome held on for his third save in five chances.