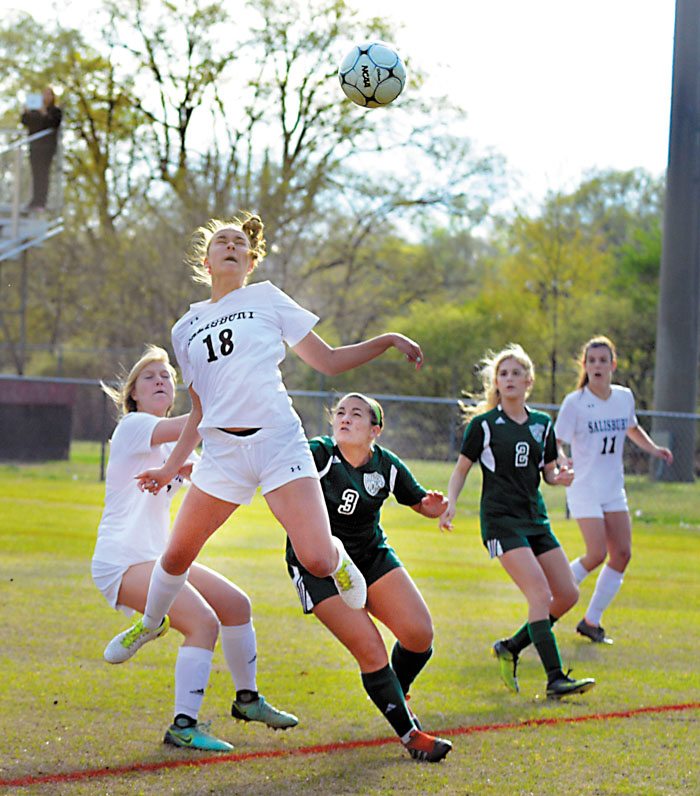 Salisbury's Piper Muire 18 heads the ball into the goal for the first goal in the game. photo by Wayne Hinshaw, for the Salisbury Post

The defending Central Carolina Conference champion demonstrated as much on Monday when it sidestepped a land mine and downed previously unbeaten West Davidson, 3-1 at Ludwig Stadium.

“We were nervous for this one,” said sophomore defender Elle Kennedy. “Neither team had lost, so it was a big game. There was a lot of pressure on us.”

Indeed, both teams had pushed significant chips to the center of the table. Salisbury (12-0, 10-0) was ranked fifth in the 2A state poll prior to the opening whistle and West (10-1, 8-1) was seventh — yet the Hornets were able to impose their will on the second-place Dragons, dominating the first half and much of the second.

“To be where the two of us are in this league right now, I’ll take it every day and twice on Sunday,” said SHS coach Matt Parrish. “We’re really working hard. To be in this position, I can’t ask any more.”

West coach Chris Brown was disappointed but gracious in defeat. “A lot of it was our mistakes,” he said. “And a lot of it was because they’re that good. The fun thing is that we’re two of the original CCC teams (in an altered conference) and we’re the ones fighting for the top spot.”

The fight started with both teams trading jabs and delivering accurate shots on goal. But the first knockdown came in the 18th minute, when Salisbury freshman Lillie Rusher sent a corner kick to the doorstep that freshman Piper Muire headed past West netminder Haley Lowe.

“It was a good ball,” Muire said after netting her 12th goal.”I was just trying to put my head on it. First I had to run in there, get around some people and find it.”

Salisbury outshot West 21-5, including 12-3 in the first half. It pushed its lead to 2-0 with 16:36 remaining in the opening half when do-it-all midfielder Julia Honeycutt was award a penalty kick after being fouled in the penalty area. Her well-placed PK fooled Lowe and bolstered Salisbury’s team confidence.

“I took that as this team making strides,” added Parrish. “We got a two-goal lead based on doing this, this, this and this successfully. As long as we didn’t resort to failing at those things, we’d be able to maintain the lead.”

They did, but not before West gave them a scare. While SHS continued its pressured attack — with hard-working speed merchants Maria Capito and Ellen Simons forging open lanes down the left side and freshman Caroline Cardelle chasing down loose balls in the midfield — the Dragons used a rare turnover to gain possession in Salisbury territory. A muffed clearing attempt later they scored, rather abruptly, when junior Cassie Riggs settled a corner kick by teammate Mia Davis and steered the ball past Salisbury keeper Emily Mann.

“Before that, we couldn’t link any passes,” said Brown. “We were getting the ball, playing it first time out and just hitting it to hit it. We couldn’t link with our striker up top because everybody was so far back playing defense.”

Kennedy was nearby on the play, but unable to sweep the ball from danger. “We really didn’t expect it,” she said. “(Riggs) was behind me and I didn’t see her until it was too late.”

The goal, Riggs’ eighth of the spring, cut the deficit to 2-1 with 29:21 remaining in the match. Somehow, Salisbury’s defense — anchored by Kennedy, Rusher, Olivia Dagenhart and Bethanie Stauffer — flushed it aside and persevered. “If anything,” Honeycutt said, “that goal in particular made us press even harder. It opened our eyes.”

The evening’s prettiest goal came about seven-and-a-half minutes later, when Salisbury forward Anna Grace Woolly gathered a feed from Simons and carefully served a soft shot into the upper right corner. “That was upper 90, right corner,” Honeycutt explained. “Anna Grace is really good at placing the ball — as opposed to shooting it. She took her time and put it in.”

Parrish wasn’t dancing a jig on the sideline, but he gushed over Woolly’s sense of awareness. “That’s the second time this year where she very calmly sat, picked up her head and placed the ball exactly where she wanted it,” he said. “She didn’t cream it. She didn’t crush it. She just put it where no goalie is making that save.”

And with it, the Hornets were on their way to the CCC’s top floor.

NOTES: Honeycutt’s goal was her 22nd. … West freshman fullback Tiffany Berrier suffered a sprained ankle midway through the first half and was replaced by sophomore Meagan Klinkoski. … Salisbury played without sneaky-quick forward Freya Obermueller, who was on a college visit with her parents. … The teams meet again in Tyro on Thursday night, but both play conference matches Wednesday. SHS hosts Lexington and West visits East Davidson.

Intimidators: Cam’s Clubhouse is a first in minor league…