One out away, Salisbury falls to East Davidson, 6-4 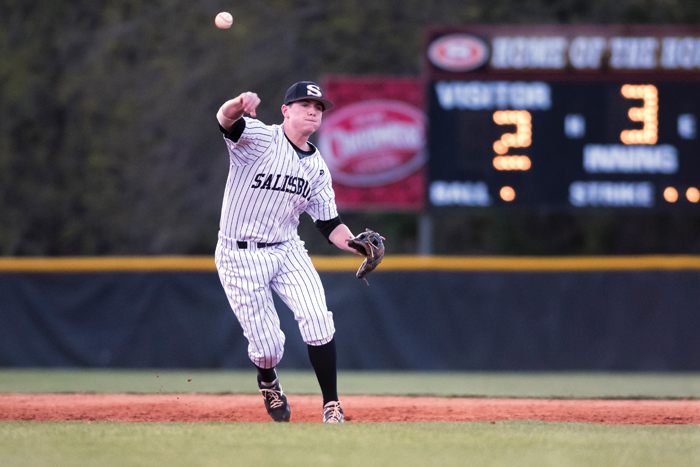 Rebecca Benson/Salisbury Post Salisbury shortstop Griffin Myers gets to the ball and fires to first base, during Tuesday night’s game against East Davidson. The Golden Eagles rallied with three runs in the seventh inning to win, 6-4.

SALISBURY — It was a loss that had coach Mike Herndon and the Salisbury baseball team peering under the hood, searching for answers.

Tuesday’s 6-4 Central Carolina Conference setback against visiting East Davidson may have been nothing more than a hiccup for the Hornets, yet they surrendered three unearned runs in the top of the seventh inning and lost a game they were one out from winning.

No one in pinstripes was laughing after the Hornets (12-6, 9-4) were left clinging to third place with five league games remaining.

“It’s always the worst way to lose, in the last inning like that,” junior catcher Bo Rusher said after SHS coughed up a 4-3, final-inning lead. “We didn’t play our best. All we can do now is try to learn from our mistakes.”

Rusher lost the game in relief following starter Jack Fisher’s durable six-inning effort. The left-hander’s final pitch — his 96th of the game — saw East’s Cam Miller reach on an infield error leading off the top of the seventh. With runners at first and second and two away, Tristan Eppley lined a run-scoring single to left-center that tied the score. Teammate Auggie McIntire followed with a decisive, two-run single up the middle.

“This game was great for our confidence,” fourth-year coach Dan Patton said after East (8-7, 7-6) improved to 8-1 since March 16. “To know that we can come back against a very good Salisbury team is such a boost. For me, it was especially nice because a senior had to get a bunt down. A senior gets the game-tying hit. And another senior gets the game-winning hit. When your seniors do what they’re capable of doing, that’s how victories happen.”

The game nearly took a different turn in the top of third. Fisher, who scattered six hits and struck out nine, fanned East’s first two batters and was way ahead of Landon Hilbourn when his 0-2 curveball narrowly missed the strike zone. “I didn’t think it missed,” said Herndon.

Rusher tried to frame the pitch on the inside corner. “If I’m hitting, that’s way too close to take,” he said. “I’m surprised the umpire didn’t ring him up.”

Fisher proceeded to lose his command. He walked Hilbourn, then allowed run-scoring hits by Eppley, McIntire and DH Preston Eagle to put Salisbury in a 3-0 hole.

“After that two-strike pitch, I wasn’t effective with my next three,” Fisher said. “I probably left a couple pitches too far in and a couple too far out. And they just started getting timely hits.”

The Hornets responded against East junior right-hander Jeff Stanley in the last of the third. They scored four times — two on Rusher’s ground-ball single to right and two when Eppley’s throw from shortstop pulled first-baseman McIntire off the bag. Rusher, Salisbury’s RBI leader with 26, went after a 3-0 pitch with the bases loaded.

“Sometimes, I get really anxious at the plate,” he said. “The coaches always tell me if it looks good, take a swing. I thought that was a very hittable pitch and was able to get two runs in.”

Now working with the lead, Fisher responded by retiring eight of East’s next 10 batters. He threw first-pitch strikes to 21 of the 24 batters he faced and was aided by rally-choking double plays in the first and fifth innings. Rusher, meanwhile, picked off baserunners with snap throws to first in both the fifth and sixth innings.

Winning pitcher Zach Stevens pitched two innings of shutout relief and earned his first victory. He worked out of a jam in the last of the sixth by fanning Rusher with runners at the corners and two down. Then with Chandler Lippard aboard in the bottom of the seventh, he fired a strike-three fastball past Fisher and induced Joe Steinman to bounce into a game-ending double play.

“You’ve just got to pitch to contact and let the boys behind you play ball,” Stevens said. “I’m just one element in this chess match. But we have nothing to lose and gave it our all.”

NOTES: Salisbury entered the game with a .333 team batting average, but managed only four hits. It drew seven walks and loaded the bases in both the first and fifth innings without scoring. … Rusher, Griffin Myers and Will Taylor had stolen bases for SHS. … The teams meet again Friday night in Thomasville. Gametime is 7:30 p.m.