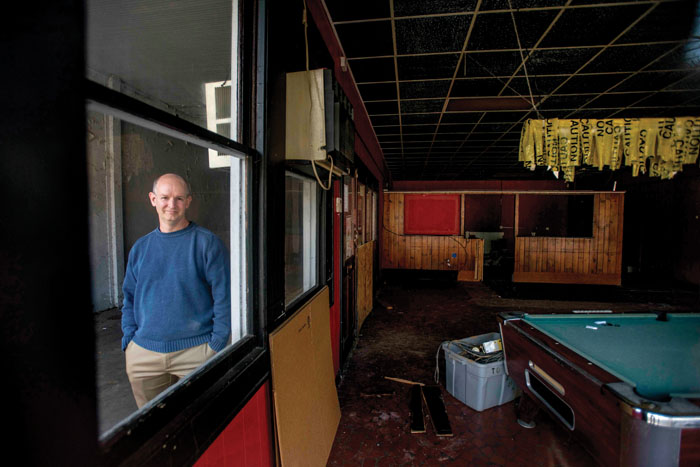 Pete Bogle takes a stroll around the property on East Innes Street that is under construction. The project mixes new construction with historic preservation. Jon C. Lakey/Salisbury Post

SALISBURY — Larissa Harper defines a “Main Street Champion” as someone who is committed to “the downtown community.”

And, says the director of Downtown Salisbury Inc., Pete Bogle “is the perfect example of a Main Street Champion.”

“If you speak to Pete for five minutes, anyone will see his heart is totally in downtown Salisbury,” Harper said. “I joke that I wish I could clone him.”

Bogle, an architect and longtime Downtown Salisbury board member, has spent nearly his entire career looking for ways that Salisbury can utilize empty spaces and renovate historic structures.

“I never thought I would come back to live in Salisbury, if you’d asked me in high school,” Bogle said. “But my thesis in college was on reuse of empty spaces, and I ended up doing some projects in Salisbury. That ended up being my basis.”

Bogle said working on his thesis led him to meet Randy Hemann, a former DSI director who was named Salisbury’s Main Street Champion in 2013.

“And he got me in touch with just about all of the downtown building owners. I got to go upstairs and see just about every one of the empty spaces in the main area of downtown,” Bogle said. “That kind of spurred on my interest in, ‘What can we do with the rest of these spaces?’”

Bogle said he moved back to Salisbury two days after graduating with a degree in architecture from the University of North Carolina at Charlotte to work for Ramsay Burgin Smith Architects.

He worked with that firm almost without pause until he started his own architecture firm, The Bogle Firm Architecture, in 2015.

Bogle said that since he moved back to Salisbury after college, the city has changed “drastically.”

“When Ramsay Burgin Smith moved into the (R.W.) Norman building in 2001 or 2002, on nights that I had to stay late and work on things, at 10 o’clock I could go home and the lights were blinking and there was nobody up and down Main Street,” Bogle said.

Now, Bogle said, Salisbury’s downtown is more of a “24-hour living” community — something he said he’s excited about.

“Because having people there 24 hours makes it a safer place, makes it a more vibrant place, brings business to those people,” Bogle said. “Having the people living there first is really the key lynchpin of getting the rest of the things moving.”

Bogle said that in the past two years, his firm has not been able to build downtown apartments fast enough.

“As soon as we get them on the market, they’re taken up. The Washington building was full within a month after it opened. I know Michael and Diane with the (O.O.) Rufty building are already getting a lot of interest, and they’re not even finished yet,” Bogle said. “So it’s a great thing that we’re developing that downtown living culture.”

Bogle said the Washington building and the O.O. Rufty’s building have been two of his favorite projects. Both of them were historic renovations.

In addition to more downtown living, keeping Salisbury “unique” should be a key consideration as the city grows, he said.

“Historic renovation is a lot of Salisbury’s charm. We’ve been lucky to be close to larger cities but far enough away that we haven’t been overtaken by them. Rowan County and Salisbury both have been able to do smart growth instead of being overtaken by sprawl for another city,” Bogle said.

Bogle said former DSI directors Paula Bohland and Becky Bradham were “instrumental” to his nomination and he thanked them for it.

“We need a plan”: Council asks city planners for…