Kathryn Lopez: How to keep going on after tragedy 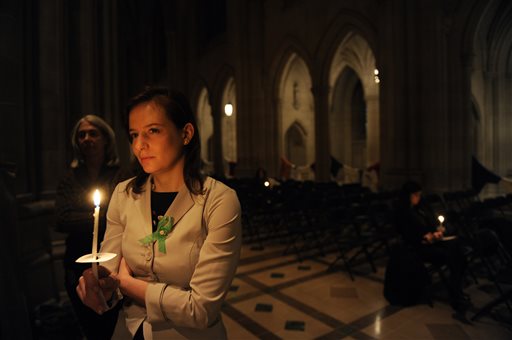 Ginny Simmons takes part in a National Vigil for Victims of Gun Violence just prior to the first anniversary marking the Sandy Hook Elementary School mass shooting at Washington National Cathedral on Thursday Dec. 12, 2013 in Washington, D.C. Members of the Newtown, Conn., community, including the parent of a teacher killed in a school massacre a year ago, gathered for the vigil to remember those who lost their lives because of gun violence. (AP Photo/The Washington Post, Matt McClain, Pool)

The gratitude of a mother will leave you speechless.

On a foggy weeknight, two mothers met to talk about the day their lives changed forever. Jennifer Hubbard’s daughter, Catherine, was killed when a gunman stormed Sandy Hook Elementary School in Newtown, Connecticut, just days before Christmas in 2012. Dawn Ford was a second-grade teacher there. At the time of the attack, she was in a conference room. Attempting to call 911, she managed only to put in an outside-line code on the room’s phone, leaving the phone off the hook — which activated the school’s public-address system so the ruckus could be heard and identified by people in the building.

Ford, whose grown son, who is autistic, was working in the library at the time, was telling her story of the day for the first time at a gathering at the Crossroads Cultural Center in New York City. Hubbard, at the start of her talk, began by thanking Ford for likely saving her son’s life.

Hubbard could wallow in anger, sadness and bitterness, but she has chosen gratitude. During the course of her grieving, she’s been open to God’s healing, even as all the natural questions and pain rise to the surface.

The message of these women is that in the wake of unspeakable violence, the most powerful answers aren’t in public policy or demonstrations, but in the way we live our lives.

Hubbard’s ability to resume something approaching a normal life with her family comes from what she found herself doing in the wake of her daughter’s murder: opening up a Bible and listening for a word from God. She has a strong faith, and she has served as an inspiration to others, reminding us that above all, we must live together and watch out for one another.

Fundamental questions of love and presence — listening and giving and receiving — are the ones that are most important and often undervalued.

In the five years since the shooting, the sense that some sort of action must be taken hasn’t subsided. People look to gun control and school safety. Foundations have been started and supported. But Ford has found herself reflecting on the situation of her autistic son, who has “a community of people who care about him, who involve him … who have taken a chance on him.”

Maybe there is a solution here, Ford suggests, finding a sense of mission to “take care of my family and friends and students, and encourage others to reach out and help people like my son, who, without community involvement, couldn’t help themselves.”

After Ford and Hubbard spoke, Ford reflected on some of the responses from around the country and world that they’ve received. There were stuffed animals and lots of material things. None of that meant as much as the prayers.

“When people said the world is praying for you, I believed it, because I felt it,” she said. When these things are not merely a thing to say — “thoughts and prayers” — there is a tremendous power there. It’s a power that helps people go on and love on, even in overwhelming pain.