Filling in the blank pages around a newsboy named Abe 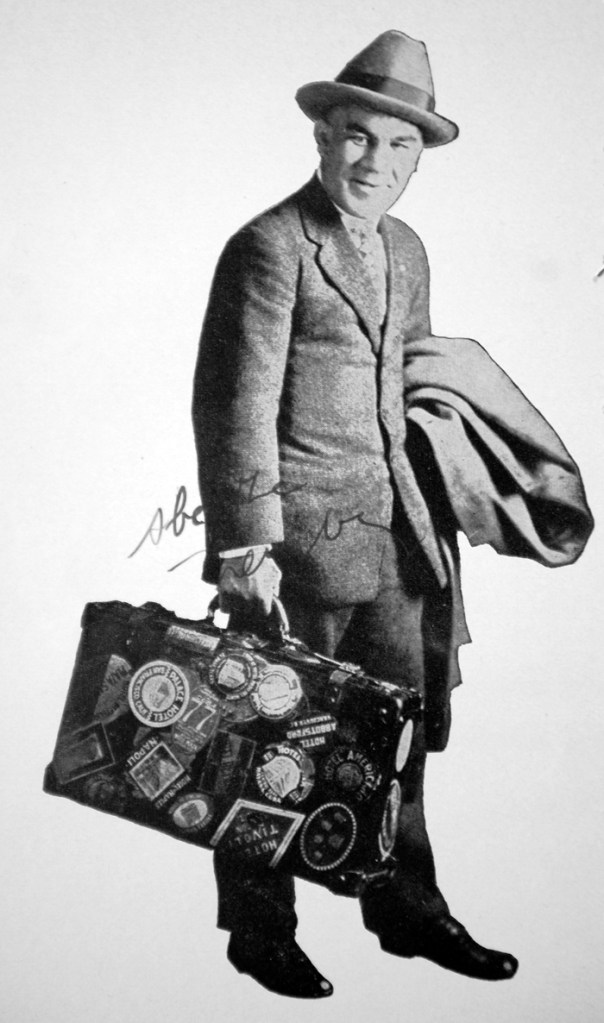 The caption under this photograph of Abe Hollandersky said 'Globe-trotting Abe the Newsboy, carrying his clippings and autographed photos in his world-trotting bag.' The picture appeared on the inside cover of his self-published book and appears to be signed by 'Abe the Newsboy' himself.

GOLD HILL — Last week, while sneaking around Gold Hill looking for a story, I stopped at the Buckle & Bell shop and found myself talking with owner Tammy Barry.

Barry has owned this place for less than a year, and most old-timers would recognize it as the old File general store, which used to be a hub of activity in the Craven community. Olivia and Lee File ran the store for 52 years before closing it and retiring in 1985.

Hardly anything has changed in the building’s appearance since it was constructed out of forest pine in 1906.

The wood inside and out is original and has never been painted. Counters, display cases and shelves have been preserved and are being used. The cage of the old Craven post office still stands in a corner. And the store is more long than wide, with screen-door entries on both ends.

You can still picture Lee File wielding a big butcher knife to cut off slices of bologna for sandwiches, and it’s easy to imagine farmers gathered around the wood stove telling tall fish tales.

The store was moved to the Gold Hill village in 2000 so it could be saved. I think it was Jennifer and Wayne Moore’s antique store before they sold it to Barry, who drives here from Raleigh on weekends to sell her eclectic array of items in Buckle & Bell.

“I just felt compelled to be part of this history,” Barry said.

Barry offers things such as jams, butters, soaps, jigsaw puzzles, T-shirts, glass art — anything that strikes her fancy. Before she opened her store last August, one of the first items of merchandise she fell in love with were vintage book journals.

These are essentially spiraled writing journals whose covers and some of their pages inside are from old books. Otherwise, the pages are fresh, white and blank, awaiting for your own words of wisdom.

I looked closely at how an old “Green Eggs and Ham” book by Dr. Seuss had been transformed into a journal. I also had a Bobbsey Twins journal in my hands, before Barry brought over one whose gold-stamped cover said, “The Life Story of Abe the Newsboy, Hero of a Thousand Fights.”

It was no contest. I left the store with that vintage book journal and ever since have become fascinated with the saga of Abe Hollandersky, who started selling newspapers to Navy sailors at age 9 and made it his career for more than 50 years.

Along the way, he also became a record-setting boxer, which explains why his mug looked as though it had been walloped 10,000 times.

He was never a member of the Navy, but Hollandersky sailed around the world three times on battleships. He also met seven U.S. presidents and famously punched Teddy Roosevelt in the ribs on Teddy’s presidential yacht.

The forgiving Roosevelt instructed one of his admirals to create a position for Hollandersky as “Newsboy of the Navy,” giving him access and free transportation aboard all Navy vessels so he could sell his newspapers to the “gobs” — slang for sailors.

Abe was born in Russia in 1887. His family left for England when he was young, then immigrated to the United States when Abe was 7. The family settled in New London, Connecticut, which had a naval base. It was there he started hawking newspapers inside the Navy yard.

As he grew older, his friends in the Navy trained him to fight, and he became a prolific boxer. The majority of his fights were on Navy ships or at naval stations. His fights included benefits, training matches and sparring contests.

The Ring Record Book gave Abe credit for fighting 1,309 bouts, not counting 387 wrestling matches. The bulk of his boxing career spanned from 1905 to 1918, and his most significant victory came in 1913 when he defeated Jack Ortega for the heavyweight title of Panama and South America, winning in the 19th round of a scheduled 45-rounder.

He also fought an exhibition match with welterweight champion Barbados Joe Walcott in 1918. His book, which he first published in 1930, says he fought — and lost to — a kangaroo in Australia and once knocked a muzzled bear out of the ring in another exhibition match.

About 1926, Abe moved to Los Angeles, where he appeared as an extra in about 20 movies, usually with other boxers. He had a newsstand and gift shop in Long Beach, California, and he reprinted his book at least 24 times.

With my vintage book journal, I hold the remnants of a 1960 edition. I swear it is autographed by Abe himself on a photograph beside the title page.

Hollandersky died in 1966 at age 78. The top of his tombstone says “Abe the Newsboy,” the same thing inscribed in my book.

I have no idea what I will write first on the fresh pages of my new journal. Maybe it will be an ode to old stores or old boxers — things that have been walloped 10,000 times and still have something to say.