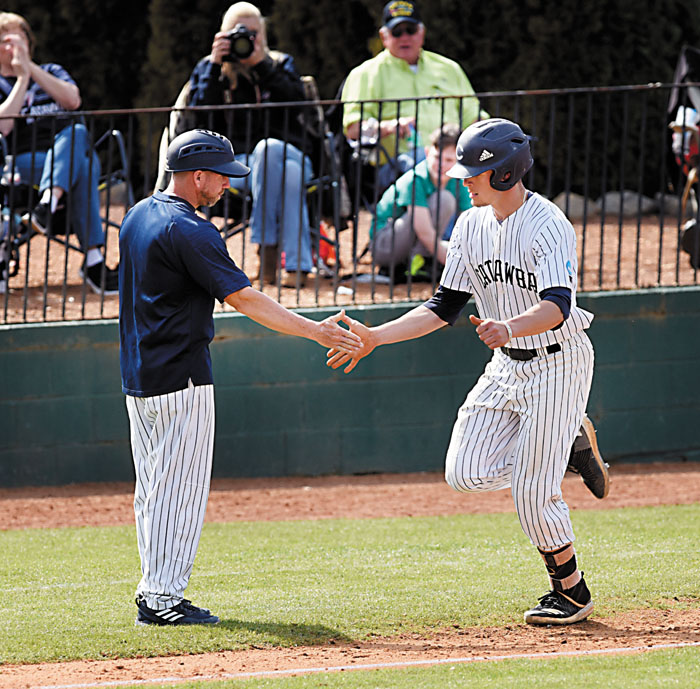 Catawba's Luke Setzer gets a hand from Coach Michael Lowman as he rounds third base on a home run, earlier this season. Setzer also homered on Tuesday, in a 13-9 victory over Mount Olive. File photo by Wayne Hinshaw, for the Salisbury Post

SALISBURY — Nine Catawba pitchers jogged to the mound on Tuesday evening. Most of them got the job done in a see-saw, 13-9 non-conference win against Mount Olive.

“Mount Olive can hit and they are no joke,” Catawba outfielder Luke Setzer said. “Shoutout to our staff. They threw a lot of strikes and got key outs.”

Catawba built a healthy lead at hitter-friendly Newman Park before losing momentum and falling behind.  But the Indians (23-18) got in the last word, pounding their way to victory with a decisive, seven-hit, six-run sixth inning.

Caleb Link, the sixth Catawba pitcher, got his first college win by getting one out. He recorded the final out in the top of the sixth and then benefited from Catawba’s explosion in the bottom half.

“The pitching  went as scripted,” Catawba coach Jim Gantt explained. ” We planned to use a lot of pitchers, and then we had some just-in-case guys who were ready if needed. As it turned out, we needed those just-in-case guys.”

Catawba came out swinging in the bottom of the first. South Atlantic Conference Player of the Week Chance Bowden is having an incredible senior season. He followed Kyle Smith’s lead-off single, with a two-run homer. After Heath Mitchem singled, Setzer mashed one over the wall for a 4-0 lead.

“Chance and I hit the home runs, but Kyle and Heath did their jobs and got on base in front of them,” Setzer said.

Leading 4-2 heading to the bottom of the second, Catawba racked up three more tallies. Bowden ripped a two-run single. He was caught stealing, but Mitchem, a pitcher the last seasons before picking up a bat this year, pulled a solo homer to right for a 7-2 lead.

“I found out in the winter that I was going to get a chance to hit this year, and I worked as hard as I could to prepare for it,” Mitchem said. “It’s gone really well after being away from it for two years. I’m hitting in a great spot in the lineup between Bowden and Setzer. Those two have about 30 homers between them, so I usually see quality pitches. No one really wants to pitch to those two guys.”

Catawba freshman reliever Pearce Wilhelm got coaxed a 1-2-3 double play ball with the bases loaded in the fourth inning to preserve a 7-3 Catawba lead.

“That pitch was big for Pearce, big for his confidence,” Setzer said.

But Catawba’s bats fell silent for three innings and Mount Olive (26-11-1), always a power in Conference Carolinas. rallied with the long ball. Four of Mount Olive’s 10 hits were homers. The Trojans grabbed an 8-7 lead in the top of the sixth when Drew Ellis, the 6-foot-5, 240-pound cleanup hitter, connected off Sawyer Stickland.

“That’s just how games in this ballpark tend to go,” Mitchem said. “You can never get enough runs.”

Down for the first time, the bottom of the sixth was the critical juncture for Catawba, and the Indians went to work. Jacob Nester singled to get things started. With one out, speedy center fielder Jason Curtis, an Appalachian State transfer who has missed most of the season with an injury, singled. Smith’s opposite-field double off the wall, made it 8-8. Then Bowden shot one through the left side for a 9-8 lead and his fifth RBI of the game.

“Bowden has been unbelievable,” Gantt said.

The Indians knew they couldn’t relax and settle for 9-8, and they didn’t. Mitchem, Setzer, Jackson Raper and Joe Butts all knocked in run. The Indians batted around and took a 13-8 lead.

Catawba’s pitching was good at the end. Freshman Greg Brown was sharp in the seventh. Cody Fitch got groundballs in the eighth. Clay Young allowed a solo shot in the ninth, but he finished things off.

“We saw some good things from our pitchers today, and we saw some bad things,” Gantt said. “I can see how there was some pressure on sone guys, but you’d like for them to look at it as an opportunity.”

Gantt was trying to figure out which pitchers he can rely on in the big games ahead. Catawba started this season 0-7 and still doesn’t have the sort of overall record it usually does, so the Indians probably will have to win the SAC tournament to qualify for the regional. Just winning the SAC regular-season title is unlikely to be enough.

“We know we can’t win the tournament with six pitchers,” Setzer said. “So today was encouraging. A lot of guys threw well, and we got a good regional win.”

D.J. Laxton, mostly a relief pitcher, did the catching for the Indians, as Cameron Morrison got a rare day off. … Catawba hosts Lincoln Memorial this weekend in its final home SAC series. The Indians are in first place in the SAC with a 16-5 record, with six games left. The SAC tournament will be played in Kodak,Tenn., on April 26-30.