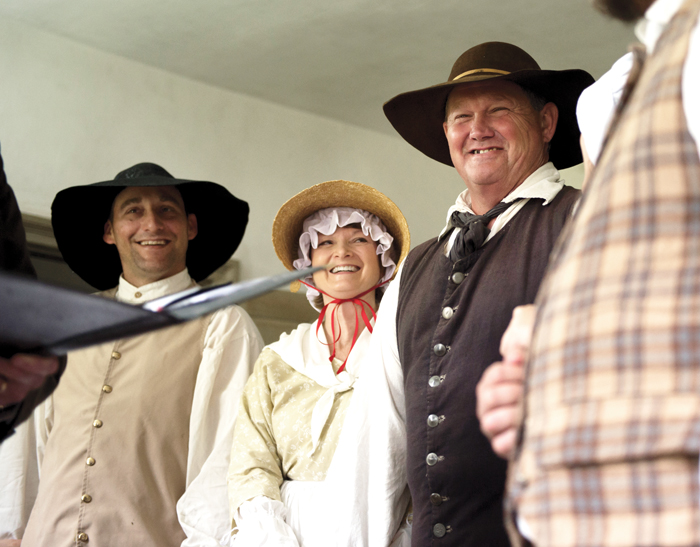 Dreary skies and soggy ground may have turned Rowan Museum’s annual Colonial Spring Frolic into more of a tromp, but good times were still had by all in attendance.

Occurring each year on the first Saturday of April, the Frolic is held at the Old Stone House in Granite Quarry. It’s Rowan County’s only surviving colonial house.

Historical interpreters were out in force during the event in colonial dress. Some played music, others completed period-appropriate household chores: cooking by a campfire and spinning yarn, for example.

Crafts were available for guests to participate in, such as dyeing Easter eggs with natural dyes — made with onion skins, berries and flowers.

New this year was the reenactment of an August 14, 1756 wedding — that of Daniel Boone to bride Rebecca Ann Bryan.

“The weather was a bit disappointing with the crowd, but weddings shall go on,” said Terry Holt, president of the Rowan Museum, said with a smile.

Boone and Bryan were married in a triple, civil ceremony by Boone’s father, Squire Boone.

On Saturday, Daniel Boone was portrayed by Robbie Cochran, a docent with the museum. Randy Lassiter, who serves on the museum’s board of directors, played the part of Squire Boone.

Cochran said he has been volunteering at the Old Stone House and with other local reenactment events for 32 years. He keeps the garden, maintains the trails, and has even uncovered a few artifacts on the grounds.

Surprisingly, Cochran’s interpretation of the famous pioneer did not involve the garb one would expect.

“This is the way he would have dressed,” he said, pointing out his waist coat and square-toed shoes.

The item of note rested on his head: a black hat with a broad brim rather than that to-be-expected raccoon pelt.

“(Daniel Boone) didn’t wear a coonskin hat. This is a low-crown Carolina hat,” he said. “This is the typical hat they would have worn in the 18th century, the way he would have dressed.”

Other players in the wedding reenactment were just as knowledgeable in all things colonial. Lassiter shared with guests everything from standards of matrimony to trivia about the famed bride and groom themselves.

“Traditionally in a Quaker family, the newlywed couple would reside with the wife’s parents for two weeks while the community built them a cabin,” said Lassiter, continuing with a laugh, “That would really stress a marriage right off the bat, wouldn’t it?”

Aaron Kepley, executive director of the Rowan Museum, was a secondary groom in Saturday’s wedding. He said that while turnout was slow, the educational event was still a good warmup for the next big event held on the Old Stone House property: GermanFest on Sept. 15.

It’s an appropriate setting: the house was built by German immigrant Michael Braun in the 1760s.

New Sarum Brewing Company, braving the weather during Saturday’s event, will make a return to the site this September.

The museum will also hold an ‘Upscale Yard Sale’ fundraiser next Saturday, April 14, at its main location: 202 N. Main St. in Salisbury.