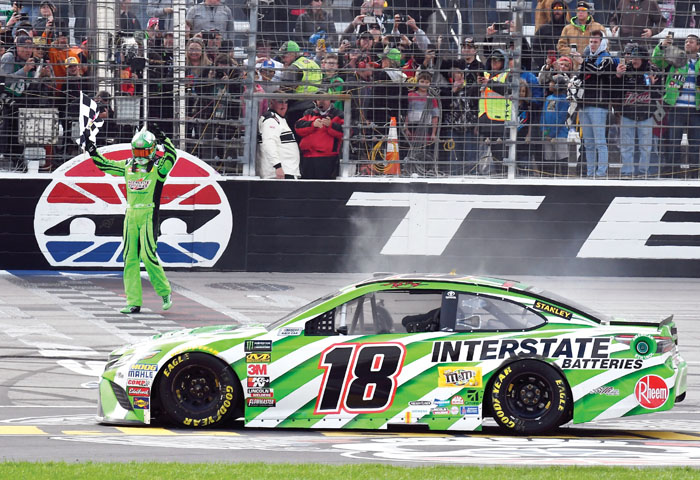 Fans look on as Kyle Busch (18) waves the checkered flag after taking the win in a NASCAR Cup Series auto race in Fort Worth, Texas, Sunday, April 8, 2018. (AP Photo/Larry Papke)

FORT WORTH, Texas (AP) — Kyle Busch’s return to Victory Lane only 10 races after his last win just seemed to take much longer. There were all those runner-up finishes in between, one in particular.

A runner-up finish in the 2017 season finale kept Busch from winning another NASCAR Cup Series championship, something he had to contemplate the entire offseason. Then he had three runner-up finishes in the first six races this year, including two that Kevin Harvick won.

On Sunday at Texas Motor Speedway, points leader Busch finished ahead of Harvick and the rest of the field for Joe Gibbs Racing’s first victory this season.

“Certainly being that close, it gets a little old a little faster,” Busch said. “If you’re finishing fifth or 10th or whatever, and you’re just not capable of winning, it certainly will draw longer as well too. … Being as close as you are, that kind hurts a little bit more, especially that final one, that Homestead one.”

“They were probably just a tick faster overall, but I just had to make sure to do everything I could to hit all my marks and everything to focus on making sure that I did the right things to block his air a little bit,” Busch said.

Jamie McMurray finished third, ahead of Erik Jones. Ryan Blaney was fifth a day after winning the Xfinity Series race.

Since finishing 25th in the season opener at Daytona, Busch has been in the top seven the last six races.

“We’ve just been on a roll of finishing really good and getting really pumped and excited about that and the momentum we were able to carry, but frustrated at the same time trying to get to Victory Lane,” he said.

Harvick, who won at Texas in November, led 87 of the first 129 laps and won the first stage. But he had issues on pit road, including a strange incident during a caution when a lugnut popped loose and into the jack. He dropped from first to ninth on that stop, then had to come back in a few laps later because of a loose wheel.

There was another stop when Harvick, who dropped back as far as 27th place and a lap behind the leader, got a penalty for an extra man over the wall when a tire got loose in the pit.

“We did overcome a lot. … We had a pathetic day on pit road, two days on pit road, because of pit guns,” Harvick said. “When you have a pit gun problem like we have multiple times and been able to overcome it and then today we couldn’t overcome it. Time after time you can’t get the lug nuts tight because the pit guns don’t work.”