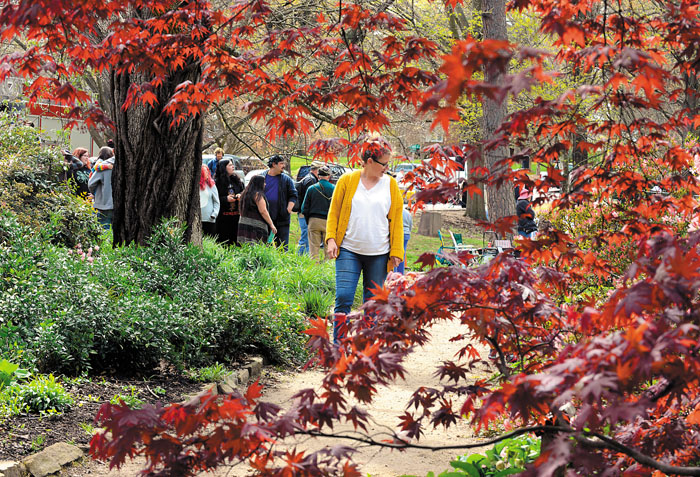 Daphne Safrit walks along a path enjoying the beauty at the Hurley Park Spring Celebration. photo by Wayne Hinshaw, for the Salisbury Post

Hurley Park celebrated the big 3-0 on Sunday with a little something for everyone.

All ages lined up for carriage rides offered by Horse & Carriage in Salisbury, and Steve Langley kept kids laughing with his Soap Bubble Circus.

Other booths at the event offered more opportunities to occupy young hands. North Carolina Wildlife had a display with pelts, traps and other goodies to get folks talking and engaged. Salisbury Symphony brought a violin as part of a musical petting zoo.

Similarly artistic displays were those by members of the Carolina Artist Guild. Cindy Calvert, Doris Trexler, Colleen Walton and Clyde all gathered along the trail to peddle pieces of handcrafted art.

Then there were chances to meet and greet with local plant and garden enthusiasts: the Rowan County Master Gardeners, Red Bud Society and Rowan County Rose Society.

“I didn’t know you could grow roses in a pot,” said one man as he walked away from one of these informative discussions. He was sipping on a cup of Cheerwine, offered free by park volunteers and staff alongside of cookies and cupcakes and popcorn.

Remarking fondly on the free beverage was Stephanie Palmore, attending with husband Nick Palmore and daughters Parker, 1, and Hayley, 7. The family traveled from Cleveland.

“The best part has been watching the kids have fun and this nice weather,” said Palmore as Hayley played with another child near the bubble circus.

Of course, all of Sunday’s festivities were set over a backdrop of music, as the Salisbury Swing Band played some much adored hits — even a round of Happy Birthday for the park.

While April 10 may be the park’s 30th ‘birthday,’ Sunday’s celebration was actually the 31st held on the beautifully landscaped grounds. Jane Ritchie, chairwoman of the Hurley Park advisory board, said a similar event was held its first year in operation.

To be named a Tree City USA, cities must have a tree board or department, a tree-care ordinance, an annual community forestry budget of at least $2 per capita and an Arbor Day observance and proclamation.

That observance occurred for Salisbury during Sunday’s celebration. Jason Walker, the county’s forest ranger, presented Tree City USA plaque. He said that Salisbury was one of only 86 cities in North Carolina and around 3,400 nationwide receiving the honor.

“It’s geared toward communities like this that are making a commitment to plant trees and maintain trees in their communities,” said Walker.

This year, he planted a weeping willow, taking careful time to instruct those around him of best practices in doing so.

One instruction, ignored in light of Arbor Day festivities, was that fall is the best time to plant trees.