Sensational start for Stewart-Haas, including 1-2-3 today in Texas 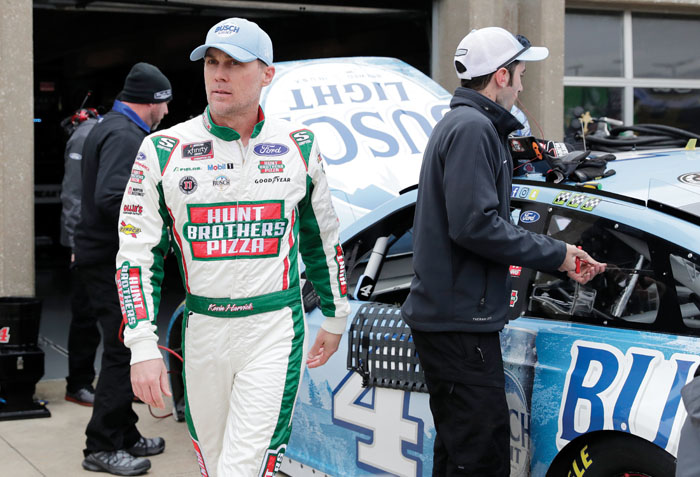 FORT WORTH, Texas (AP) — Kurt Busch is on the pole, Clint Bowyer is coming off his first victory in six years and Kevin Harvick has won half of the races so far on the NASCAR Cup Series schedule.

Aric Almirola, the newcomer to the team, has been steady, too, finishing 14th or better in every race.

With Stewart-Haas Racing already off to a sensational start this season, the decade-old team will now have the top three starters in a race for the first time Sunday. Busch, Harvick and Bowyer qualified their Fords 1-2-3 at Texas Motor Speedway, while Almirola was 12th at the 1½-mile track.

“We unloaded off the truck here and went right back to the top of the board. That is pretty cool,” said Bowyer, whose victory at Martinsville before the Easter break ended his 190-race winless streak.

“It is crazy how you can get your cars with a good balance on them and really roll them through the corners good,” he said. “It seems if they are fast at one track they are going to be fast at the next.”

All four Stewart-Haas cars are in the top 11 in season points through the first six races. Harvick is seventh, followed by Bowyer at eighth, Busch 10th and Almirola 11th.

Hendrick Motorsports also has all four of its drivers in the top 20. But Alex Bowman, Jimmie Johnson, Chase Elliott and William Byron are all below the Stewart-Haas drivers in the standings.

Busch is the first three-time Cup pole sitter in Texas, where he and Harvick will make their track-record 31st starts. TMS, which opened in 1997, is hosting its 35th race. Both have one win there.

When asked why Stewart-Haas is having so much success this season, Busch was admittedly biased in his assessment. Tony Gibson, his former crew chief including for the 2017 Daytona 500 win, is now off the road in what the driver calls “a perfect role” for Gibson, who is involved in building the cars for all four teams.

“If you go ask him now, he will say it is all about the people and process around him,” Busch said. “But he has found some good people, rearranged them into different positions and I think that our team is doing a really good job of creating continuity between the four cars.”

Harvick won at Texas last November, and this season has won the only two races on 1½-mile tracks , at Atlanta and Las Vegas, during his three-race winning streak.

This is only Stewart-Haas Racing’s second season with Ford, after the team switched from Chevrolet.

“When you see what Stewart-Haas Racing has done with Ford, we still haven’t reached the potential of where we can be,” Harvick said. “We have, in my opinion, the most stable team in the garage. When you have the most stable team in the garage from a financial standpoint and manufacturer standpoint, that attracts good people. … We are the drivers lucky enough to be in a position of where Stewart-Haas racing is right now. We have a very solid foundation.”

Three-time Cup champion Tony Stewart was still driving with Joe Gibbs Racing in 2008 when he announced he would join forces with Cup owner Gene Haas to form Stewart-Haas Racing. The team made its debut in 2009 and is in its 10th season, marking 1,000 starts in the top series when all four drivers take the green flag in Texas.

Bowyer describes the team as feeling like family and at ease. He believes Stewart-Haas is even more stable now than it was when he joined last year.

“Everybody had the confidence in a champion going over there,” Bowyer said, when asked if that stability was a credit to Stewart. “You can’t leave out the boss, Gene Haas. Everybody knows that he steps up whenever needed. The conversation with Gene is: ‘When are you going to win? How are going to win? What do you need to win more?’ It’s never anything about anything other than that.”