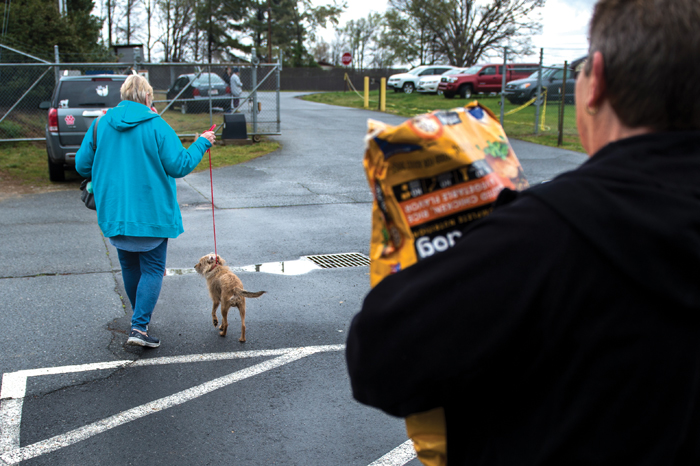 Patti Rhinevault, left, walks with her newly adopted dog, Jed, during the Bring Me Home Carolinas Adoption event at the Rowan County Animal Shelter on April 7, 2018. (Photo by Rebecca Benson)

On Saturday, some 77 cats and dogs at the Rowan County Animal Shelter found humans who would love them – rain or shine.

Their first day together was testament: the rain came, yet so did folks looking to bring home a fur-ever friend.

Saturday’s higher-than-average adoption rate came during the shelters “Take Me Home Carolinas” Adoption Special, which offered pet adoptions for 80 percent off for one day only.

Nina Dix, chair of the nonprofit group Shelter Guardians, said that hopeful families were lined up waiting before the doors opened that morning. Her group came to volunteer.

Rolo, a straggling chocolate pit bull, wouldn’t be left behind for long. Volunteers had him in the front room when his to-be family walked inside: Levi, Corrine and Lyric Reynolds.

“You know when there’s just fate and you just walk in?” said Corrine Reynolds. “I knew this was the breed that we want.”

Patti Rhinevault, one of the many in line as adoption special began, said she also felt the influence of fate with her adoption.

She’d heard about the event from her sister-in-law. Two hours after arriving, she was leaving with five-year-old Schnauzer mix, Jed.

Rhinevault said that Jed reminded her of her previous dog, Max. He was smaller, with tiny, particularly fur-covered feet.

“I call them Grinch paws,” she said with a smile. “… I can’t wait to get him home and settled and get to love him.”

Many throughout the event would reflect Rhinevault’s smile.

Rebecca Pride took home a gray cat to surprise her five-year-old son. With her own smile, she said she was drawn to the new family member because of his eyes.

All told, all available dogs were adopted during Saturday’s festivities, and only six cats remained.