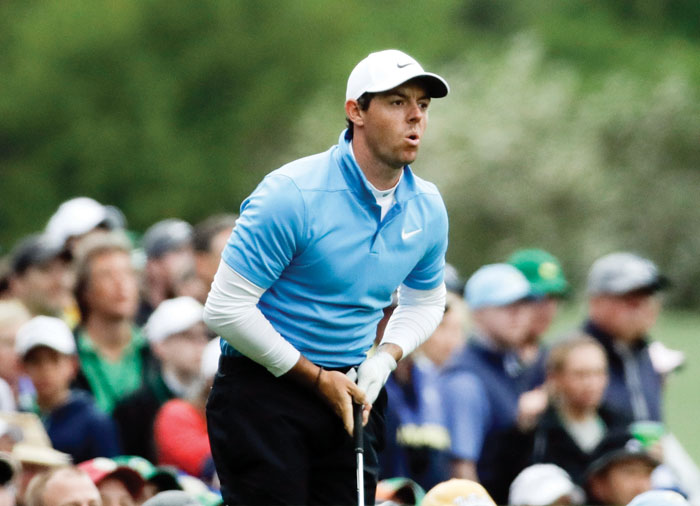 Rory McIlroy, of Northern Ireland, watches his shot on the 12th hole during the third round at the Masters golf tournament Saturday, April 7, 2018, in Augusta, Ga. (AP Photo/Chris Carlson)

AUGUSTA, Ga. (AP) — Rory McIlroy was laughing and bouncing and swaggering all the way around Augusta National.

After his final stroke on a soggy Saturday, he delivered an emphatic pump of the fist.

No wonder he’s so excited.

This is McIlroy’s best chance yet to join one of golf’s most exclusive clubs .

Taking advantage of several fortuitous bounces, McIlroy shot a 7-under 65 Saturday to match his lowest score ever at the Masters , pushing him within three shots of the lead and into the final group with Patrick Reed.

There are plenty of days when a golfer feels like the breaks go against him.

This wasn’t one of those days for McIlroy.

He chipped one in from 23 yards away for an eagle at the par-5 eighth hole . He saved par at the 13th after knocking his ball into a thick patch of pink azaleas. He watched an errant tee shot at the final hole ricochet back into the fairway, setting up a birdie that could have easily been a bogey.

“I rode my luck a little bit out there today,” McIlroy conceded. “Hopefully I don’t have to rely on it too much tomorrow.”

This is the fourth straight year that he’s arrived at Augusta National looking to complete the career Grand Slam — a feat accomplished by only five of the game’s greatest players.

The last three times, he was simply too far back to make a serious run at the green jacket on Sunday.

This time, it’s right within his grasp, though he’ll have to chase down a scorching-hot player who’s turned in three straight rounds in the 60s.

“I feel like all the pressure is on him,” the 28-year-old McIlroy said of Reed, who’s never won a major title. “He’s got that to deal with and sleep on tonight. I feel like I can go out there and play like I’ve got nothing to lose.”

Of course, this isn’t the first time McIlroy has put himself in position to win the Masters. Back in 2011, before he had any major titles on his resume, he led after each of the first three rounds, went to the final day with a four-stroke lead and was still ahead as he made the turn. He totally fell apart after that, playing the last nine holes at 7 over to finish with an 80.

He’s played well since then at Augusta, including top-10 finishes each of the last four years.

But this is his clearest path to victory since that 2011 debacle.

“I’ve been waiting for this chance,” McIlroy said. “I always have said that 2011 was a huge turning point in my career. It was the day that I realized I wasn’t ready to win major championships, and I needed to reflect on that and realize what I needed to do differently. But now I am ready.”

This certainly feels different than seven years ago.

“Obviously, I’m not in the lead like I was going into that day, so I probably don’t have as much pressure,” he said. “I don’t have to protect anything. I can go out and sort of freewheel like I did today, which is a great position to be in. I wish I was a little closer to the lead or leading, but I’m in the final group and I’ve shot 65 on moving day at the Masters. It’s all I can ask for.”

The chip-in eagle sent up a roar that carried across the course. But McIlroy’s most fortuitous hole was No. 13, the dogleg of a par-five that finishes off Amen Corner.

With the off-and-on rain really coming down, McIlroy yanked his second shot into the azaleas lining the left side of the green, the club flying out of his hand after the follow-through. As he walked toward the last place he saw his ball, he wasn’t even sure he’d be able to find it.

Then, McIlroy got an impromptu lesson in horticulture.

“It was a sea of pink,” he said. “But azaleas are actually pretty thin down below. They look pretty thick on top, but down below they are actually not too bad. I could take a stance and just sort of pick the club straight up and get it back down on top of it and just trundle it out through the pine straw and back on to the grass.”

McIlroy advanced his ball to the edge of the green with his third shot, and then knocked it up within 4 feet of the cup before rolling in the par-saving putt. He birdied two of the last four holes to match Fowler and Rahm for the best 18-hole score of the tournament.

Now, he’s ready for a moment that seems like it’s been six years in the making.

And the stakes couldn’t be higher.

McIlroy already has a U.S. Open, a British Open and a PGA Championship.

The Masters is the only missing link.

“Patrick is going for his first,” McIlroy said, pausing for effect, “and I’m going for something else. It’s going to be good fun.”

With that, McIlroy delivered one more smile on a day filled with them.

Masters: Patrick Reed heads to final round with 3-shot…