Masters: Patrick Reed heads to final round with 3-shot lead 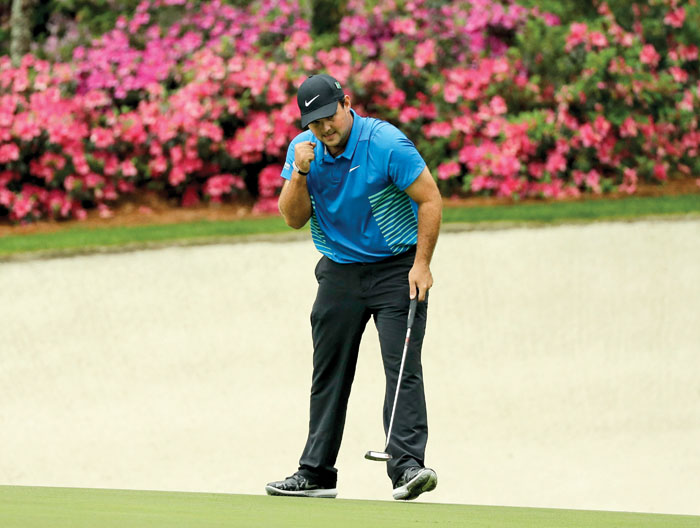 Patrick Reed reacts to his eagle on the 13th hole during the third round at the Masters golf tournament Saturday, April 7, 2018, in Augusta, Ga. (AP Photo/David J. Phillip)

AUGUSTA, Ga. (AP) — The only thunder was on the ground, not in the sky, a series of ear-splitting roars for Patrick Reed and his two eagles, Rory McIlroy and his final birdie, and everyone else who tried desperately to keep up with them in the Masters.

“The roars … it’s hard not to know what’s going on,” McIlroy said.

By the end of a wet and wild Saturday at Augusta National, Reed helped bring this Masters into focus.

Reed seized control with a pair of eagles on the back nine, two big pars and a 5-under 67 that gave him a three-shot lead over McIlroy as he goes for his first major in the city where he led undermanned Augusta State to two NCAA titles.

His primary challenger is McIlroy, in the final group at the Masters for the first time in seven years, this time with a shot at the career Grand Slam.

This time it’s for a green jacket, not a gold Ryder Cup trophy.

This is for themselves, not for team.

Reed and McIlroy are indelibly linked to that Ryder Cup singles match at Hazeltine some 18 months ago when they traded big putts and uppercuts until Reed prevailed on the 18th hole.

“It won’t be quite as intense as that Ryder Cup match, I don’t think,” McIlroy said, alluding to the partisan and at times rude nature of cheers rarely found at Augusta National.

“I think we’ll still be feeling it. It’s the latest round of a major championship. Patrick is going for his first major. And I’m going for … something else.”

He paused and smiled upon hearing a few chuckles.

That “something else” is something grand. At stake for the McIlroy is the final leg of the career Grand Slam, achieved by only five other players, and completed only once before at the Masters by Gene Sarazen in 1935.

Reed ran off three straight birdies around the turn, and he stretched his lead to as many as five shots with his eagles.

The first one was a 15-foot putt on the 13th hole. The next one was far more bold. From just under 270 yards, with the rain making the air feel heavy, Reed hit 3-wood just over the water and short of the bunker. His chip from 80 feet slammed against the pin and dropped for eagle. Reed pumped his fist, the kind of emotion he typically saves for the Ryder Cup.

McIlroy made up a five-shot deficit in eight holes when he chipped in for eagle on the par-5 eighth. Reed was in the group behind him, and perhaps the cheers inspired him. He holed a 10-footer for birdie, the start of three in a row to regain control.

“Any time you hear a bunch of roars, you’re going to get excited, especially if you feel like you’re playing some good golf,” Reed said. “Felt like I was doing what I needed to do. Of course, I heard the roar on 8, but then to birdie 8, to make the putt on 9, and then hit a good shot on 10 and make birdie there … I just felt like from that point, the crowds were electrified.

“You had to ride the momentum and keep it going.”

McIlroy can only hope he didn’t use up all his luck. He figures that chip-in at No. 8 was going off the green except that it struck the pin. He also feared for the worst when his second shot on the par-5 13th went into a sea of pink azaleas, and he wasn’t sure he couldn’t find the ball. He found it, and the bushes are thin enough he could chip out of the mess and escape with par.

“Just a great day,” McIlroy said. “To get myself into the final group, and have a chance to win another major … you couldn’t ask for much more out of today.”

The verbal gamesmanship may have started early.

“I feel like all the pressure is on him,” McIlroy said. “He’s got to go out and protect that, and he’s got a few guys chasing him that are pretty big-time players. He’s got that to deal with and sleep on tonight.”

“I am leading,” he said. “But at the same time, he’s trying to go for the career Grand Slam. You can put it either way. Honestly, I woke up this morning, felt fine. Didn’t feel any pressure. Just came out and tried to play some golf. And I believe that’s how it’s going to be tomorrow.”

Both realize that even with their Ryder Cup connection, this is hardly match play.

Rickie Fowler made eagle on the par-5 second and was 5 under through eight holes. He cooled until the end of his round, when a pair of birdies over the last two holes gave him a 65 and left him five shots behind.

Jon Rahm of Spain also chipped in for eagle on No. 8 and saved par on the 13th after hitting into the creek in his round of 65. He was at 8-under 208. Henrik Stenson (70) was seven shots behind.

Tiger Woods had to significantly lower his goal this week. He shot 72, was 18 shots behind and now hopes to finish the tournament under par.

So many others who started the third round with a chance didn’t do nearly enough to stay even remotely close to Reed. Justin Thomas (70), Jordan Spieth (71) and Dustin Johnson (71) all are at least nine shots behind.

More than any pressure with the Grand Slam at stake, McIlroy has a score to settle. He had a four-shot lead in the 2011 and shot 80 in the final round.

Now it’s the missing piece of the slam. He says he learned from his mistakes — McIlroy won the first of his four majors at the U.S. Open two months later — and loves the idea that he has nothing to lose being three shots behind.

“I can’t imagine there’s going to be much chat out there tomorrow,” McIlroy said. “Not that I have anything against Patrick. We’ve actually got quite a good relationship. But at the end of the day, it’s business and we’re both trying to do something pretty special.