Maple Leafs’ coach grieves, along with Canada and NHL 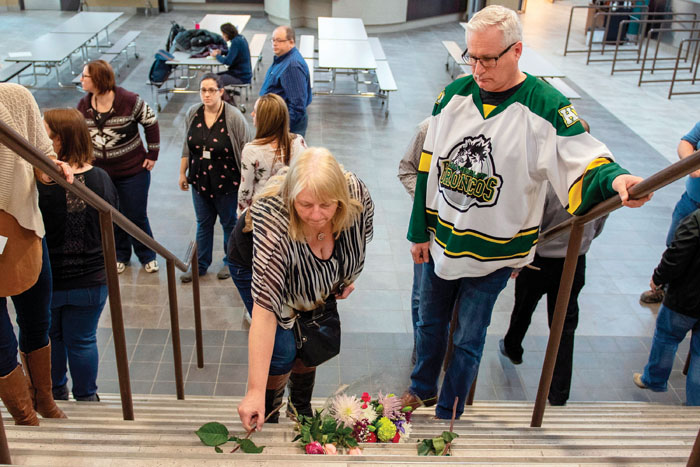 Humboldt mayor Rob Muench, right, in the Broncos team jersey, along with other mourners lay down flower on the stairs that enter to Elgar Petersen Arena, home of the Humboldt Broncos, in Humboldt, Saskatchewan, Canada on Saturday, April 7, 2018. Canadian police said early Saturday that several people were killed and others injured after a truck collided with a bus carrying the junior hockey team to a playoff game in Western Canada. Police say there were 28 people, including the driver, on board the bus of the Humboldt Broncos team when the crash occurred around 5 p.m. Friday on Highway 35 in Saskatchewan. (Liam Richards/The Canadian Press via AP)

TORONTO (AP) — Toronto Maple Leafs coach Mike Babcock stood at the podium and fought back tears, the grief resonating across Canada and the NHL.

A bus crash in his home province of Saskatchewan left 14 dead and 15 injured, three critically. A junior hockey team, the Humboldt Broncos, was headed to a playoff game Friday afternoon when a truck collided with its bus. Among the dead were the team’s coach and captain.

“It’s got to rip the heart out of your chest,” Babcock, who grew up in Saskatoon, said at Air Canada Centre. “We pray for those families and think about them. Horrific, horrific accident.”

Added NHL Commissioner Gary Bettman: “The NHL mourns the passing of those who perished and offers strength and comfort to those injured while traveling to play and be part of a game they all love.”

Toronto center Tyler Bozak said he had difficulty sleeping after hearing the news about the crash near Nipawin.

“You can’t really put into words, anything,” Bozak said before Saturday’s regular-season finale against the Montreal Canadiens. “I can’t imagine what everyone’s going through back in Saskatchewan.”

Colorado Avalanche coach Jared Bednar grew up in Humboldt. He said a friend’s son plays goaltender for the Broncos and survived the crash.

“He went to surgery last night in Saskatoon, and hopefully he’s doing better,” Bednar said from Denver. “It’s a tough time for that town. It’s a tight-knit community. It’s only 6,000 people.”

Former NHL player Sheldon Kennedy well understands the “state of shock and confusion” people are feeling. Kennedy was involved in a crash in 1986 that killed four players when a bus carrying the Swift Current Broncos hit a patch of ice and crashed.

“I think one thing that we underestimate with the impact of trauma and PTSD and going through things like this is the magnitude of the impact,” he said. “That is what I can’t stress enough.”

Patrick Marleau of the Toronto Maple Leafs was a boy in Saskatchewan when the Swift Current crash happened.

“It’s something you remember when you’re that young,” he said. “You see the players wearing the logo on their jersey for the players that were lost. It definitely hits home. Growing up around Swift Current, it was always in people’s mind. There’s memorials. They’re never forgotten.”

Babcock has driven the stretch of two-lane highway north of Tisdale where the team was heading to play Game 5 of a semifinal against the Nipawin Hawks.

“I know that road pretty good,” he said. “It didn’t seem like a big spot, it’s not mountains or anything like that, but accidents do happen.”

Marleau knows the hold the game has in his country, and how “hockey is everything in Canada.”

“But in Saskatchewan, every community’s fairly small,” he said. “So everybody knows everybody and you try and look out for each other and take care of each other.”