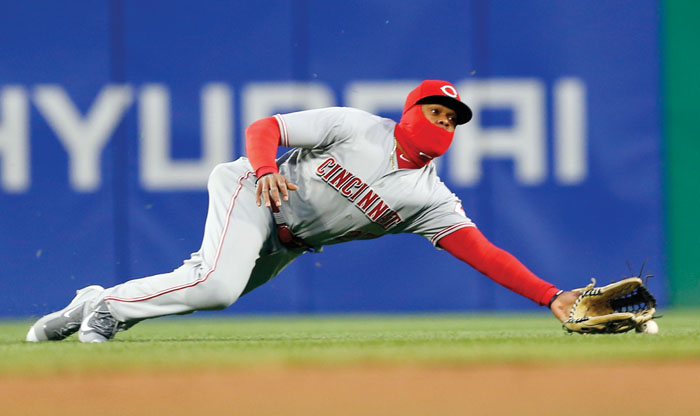 AP Photo/Keith Srakocic Bundled-up Cincinnati Reds right fielder Phillip Ervin comes up short as he dives for a fly ball by Pittsburgh Pirates’ Adam Frazier in the second inning of a baseball game, Saturday, in Pittsburgh.

Skip the concession stands. There were plenty of chilly dogs in the seats at Globe Life Park in Texas.

All over the big leagues, players and fans and even pooches bundled up Saturday at icy stadiums. At least there wasn’t any snow — a wintry mix has blanketed the majors early this season, part of the nine postponements in just 10 days.

It was a record-low of 27 degrees for the first pitch at Target Field, so frigid the Minnesota Twins and Seattle Mariners abandoned the bullpens.

Ski masks were in style at Busch Stadium, and it was wicked cold at Fenway Park when the Red Sox limbered up. Not much better in Cleveland, Chicago or Pittsburgh, either.

And those poor pooches for Bark in the Park Night as Toronto visited Texas. The gametime temperature was an unseasonable 42 degrees, with a wind chill of 35 — a night earlier, it was 74 degrees at the start.

“I was getting picked on a lot of the time for having a hoodie on,” Mariners center fielder Dee Gordon said. “Then we went out, and everybody on their team had a hoodie on. I was like, ‘Oh, I don’t feel so bad.’”

Gordon will probably need the winter gear Sunday, too, with snow in the forecast.

The Cardinals had their coldest home start in history, 37 degrees with a wind chill of 29 as they beat Arizona 5-3. The previous recorded low in St. Louis was 38 degrees in 1961.

“When you start thinking about the weather and stuff, you got to go through it,” Jose Martinez said after homering in the win.

Rangers manager Jeff Banister decided to hold Adrian Beltre out of the lineup on his 39th birthday. On Friday night, Beltre got three hits and moved into 24th place on the career list with 3,058.

At Minnesota, relief pitchers moved out of the shaded bullpens in left-center field. Rather, they warmed up in the indoor batting cages near the clubhouses, then trotted to the mound from the dugout.

“The bullpens were probably 15-20 degrees colder. There’s no sun down there,” Mariners manager Scott Servais said. “MLB worked with us on that, as did the Twins. It was the right thing to do.”

The coldest start in major league history was at Coors Field, where it was 23 degrees when Atlanta played at Colorado in April 2013. It wasn’t much better there Friday, where it was 27 after the Braves and Rockies waited out a one-hour delay caused by snow and sleet.

Atlanta and Colorado were back at it Saturday night at Coors. And guess what? In the mid-50s, it was positively balmy.