Intimidators: Cam’s Clubhouse is a first in minor league baseball 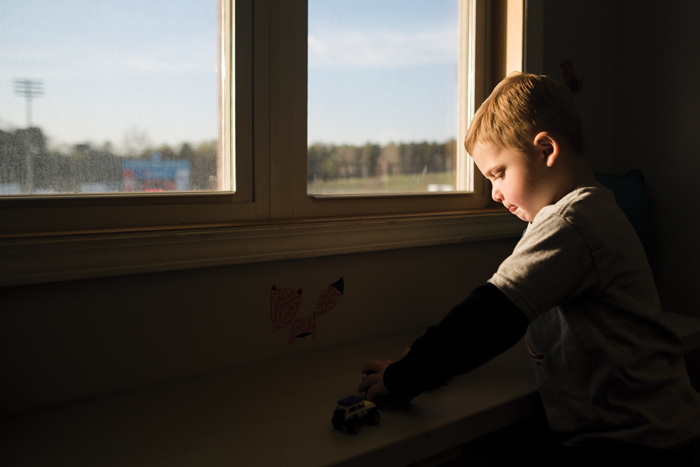 Rebecca Benson/Salisbury Post ... Cam Radle, who has autism, plays with toy cars by the window in Cam’s Clubhouse that looks out onto the field of Intimidators Stadium. The room is the first of its kind in all of minor league baseball.

KANNAPOLIS — It’s nothing flashy and most Kannapolis Intimidators fans won’t even realize it’s there.

But this season, the team will have a new and innovative area inside Intimidators Stadium, specifically designed to better accommodate and assist special needs children to enjoy the ballpark experience.

Formerly executive offices, the space overlooking right field is a calm area that is free from the crowds and the noise of Intimidators Stadium. In conjunction with the kickoff of Autism Awareness Month, the space, known as ‘Cam’s Clubhouse,’ opened Thursday night during the Intimidators’ first game of the season.

Cam’s Clubhouse comes from the effort of new team president and general manager Brian Radle and the space is the first area fully dedicated to being sensory friendly in Minor League Baseball.

Being in a baseball family, Cam has been around ballparks since he was born. With his condition, it hasn’t always been easy for Radle and his wife, Jeanine.

“However, when he would struggle, it has always been relatively easy for us to take him to a quiet area to settle down if he became overwhelmed, or inconsolable,” said Radle.

Thus, the idea “to provide a safe space at our ballpark for all families to go to if they need to … a calm place, a sensory friendly space, where all special needs children would be welcomed,” added Radle.

Radle is in his 13th year in baseball, most recently with the Boston Red Sox’ affiliate in Lowell, Mass., before starting as Kannapolis’ president and general manager last October. He’s also been in Delaware with the Wilmington Blue Rocks, a Kansas City Royals’ affiliate.

The Radles have a 4-year-old son, K.J., who does not have special needs. But when Cam was diagnosed, their lives changed.

“As parents, it was hard to process and life got flipped upside down for a while,” remembers Radle. “Little things like going to the grocery store became difficult. Being a baseball family, I’m obviously here at the ballpark a lot of the time and with a wife and two boys, to have that balance in our life, they’re here a lot as well.

That observation helped lead to the development of Cam’s Clubhouse during this past offseason.

“It’s what really brought this thing forward,” said Radle. “We had a lot of internal conversations and we were looking around the ballpark and we thought this space was perfect for this. We saw the development with Cam and you hate to think that coming to the ballpark is a deterrent for any parent that has a special needs child. We don’t want those kids missing out on all the fun that any other kid gets here at the ballpark.”

Radle met with the Autism Society of North Carolina and got tremendous feedback and insight. “They really helped us out, even with the pink color on the wall to a lot of the items and toys that are in the Clubhouse — ideal for special needs children,” he said.

While the inception of Cam’s Clubhouse is of a personal nature for Radle, the Intimidators’ staff was “all in.”

“It was a team effort,” said Radle. “It’s a family affair around here. As a front office, the more we talked about it, the more we rallied around it and we started looking into it, too, that no other ballpark in minor league baseball had done something like this — a fully dedicated space for every single game.

“We’ve seen some other teams that have had areas like this on specific dates, but not all of the time,” Radle continued. “But whether it was the first one or not, we were totally committed to fully dedicating this space for every single game — not just select games.”

To access the room, Radle says that parents should just notify an usher in the ballpark and they can be led, either up the stairs or by elevator. “It can give parents an escape, if their special needs child gets overwhelmed in the ballpark, they can go right up to one of our ushers, and can be directed right up,” said Radle.

Cam’s Clubhouse will always have a staff person present and Radle doesn’t expect to have a problem with anyone mistaking the space for a regular playroom.

“We’ll have the honor system,” said Radle, “but I also look at it this way: As a parent now of a child with autism, it’s refreshing to me to know that kids are now growing up in a world that’s more understanding of differences. So, even if we have a kid that isn’t exactly special needs in here, for he or she to be around and interact with kids who do have special needs … I look at it as a positive.”

The Intimidators look to move into a new downtown ballpark in two years and Radle hopes that Cam’s Clubhouse will be part of the plan.

“We’ll see how this goes,” said Radle. “We really believe in this, not just now, but in big picture. So this first season will give us some pros and cons, going forward in the design of the new ballpark.”

So how does Cam feel about the new space that bears his name?

“Well, he’s non-verbal,” said Radle. “He hasn’t said any words yet but I can tell that by just seeing him smiling, that he’s comfortable. That’s the thing about this, it puts a lot of things into perspective. When we think we have it bad or are having a bad day, in a way, he’s immune to it and in his own world. He’s a happy kid and when he comes up and enjoys the room — that says it all.”