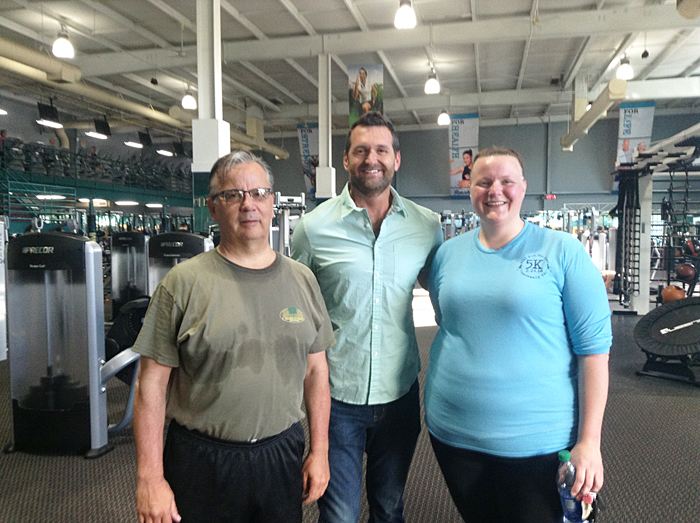 (L --R) Michael Hallett, Forum co-owner Matt Marsh and Mary Burridge after a workout. Karen Leonard was out of town.

For several reasons, results have not been what was expected at this point. I asked each of the trio to tell me what has been going well in March and here are the replies.

Mary Burridge, program manager at Smart Start Rowan, is enjoying weekly strength training sessions. Karen Leonard has been enjoying a non-specific regular workout routine and she feels better overall. Michael Hallett, financial advisor, said, “I ran while on vacation in Florida, and I have increased my running in my Corbin Hills neighborhood to include a few more hills.”

Those were the good things. The other part of the equation has not been good. Mary and Karen, Oak Park Retirement activities director, didn’t lose any weight an Michael gained part of his back. As Michael put it, “There were a lot of hills and valleys during March.”

The biggest thing is that I was away for nearly all of the month. I am taking the blame for lost momentum. I will be with the group all of this month.

Mary particularly is discouraged by her lack of weight loss during the month. She has become the most consistent with her workouts. Mary and Karen both have medication issues that are being adjusted. Michael went on vacation and also had some family health issues. He settled for a less-than-productive caloric intake.

Each of the group must focus on their eating. Mary described her issues well. She said, “I use the “My Fitness Pal” app to track my calories. I find that I will do well for a week or so, then I slack off. Most of the time when using the app, I find it hard to reach my goal of 1500 calories. I am trying now to be intentional about the food I put in my body. As I wrap up grad school, I am finding myself back in the “eat what’s available” mind frame and I know this has to change. When I crave something that isn’t so healthy I have started asking myself to consider the calories. I have found that most of the time a Little Debbie Swiss Roll is not as delicious as the calories that I take in but sometimes the calories from a small bowl of ice cream are worth it. It truly is a mind change. I enjoy food too much to make myself miserable by eating things that I despise just for the sake of losing weight. Instead I realize that it truly is about moderation. Indulging occasionally is ok but I must remember to stay on track and not make a habit of ingesting unhealthy foods.”

Michael added more of the same, “I know that my weight increased and I attribute it to two factors. My average workouts per week dropped below four, and I’ve lost control and interest in a “stricter” diet, which means I’m eating whenever I can and not monitoring the intake. I also know I’m not drinking enough water.”
And Michael’s next words will set the tone for April, “The good news is I’m very aware of the situation and will correct the matter. I enjoyed vacation and ate more than my share of “non-athletic” courses. That party is over and I am back to a stricter view of what my intake is, despite the challenge of caring for my parents and their needs.”

For April, my goals for Mary, Michael and Karen are to become much more serious about their wellness program. Once again, they lost momentum when I was gone but ultimately it is their responsibility to make this program a success. I earlier asked them all to share daily group updates with me on their workout activities and this fell by the wayside.

When things were going well early, I relaxed too much with them. That won’t happen in April. Each month we need to gain ground and make goals that can be reached by aggressive effort. I asked for specific goals from the group for April and did not get them. Mary and Karen essentially stayed the same and Michael gained weight in March, so we have to reverse that trend.

So, here are the goals for April: cardiovascular fitness and calorie burning will be my focus for each of the group with a minimum of a five-pound weight loss. I also want to see each of them get involved in at least one new group class or activity and follow through with it. Anything less will not be acceptable.

These are great folks but they have lost their way. Their personal trainer hasn’t done his part. He will this month. See you back here at the end of April with better results!