Blaney 3rd straight to win Xfinity race in No. 22 car 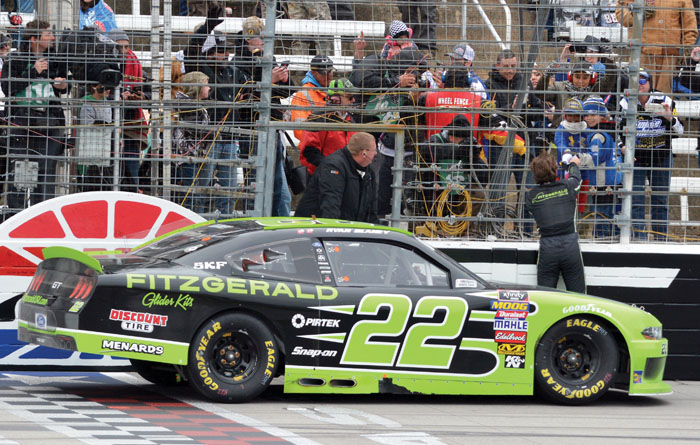 Ryan Blaney, standing outside car on right, hands the checkered flag to a group of boys after winning the NASCAR XFinity series auto race in Fort Worth, Texas, Saturday, April 7, 2018. (AP Photo/Randy Holt)

Ryan Blaney became the third different Cup Series regular in a row to win an Xfinity race in the Team Penske Ford. He was the pole sitter and led 132 of 200 laps on an unseasonably chilly Saturday at Texas Motor Speedway.

“You never want to be the person who breaks the streak of wins, especially when a car’s been so fast,” Blaney said. “There was that reminder in the back of my head to try to get this one.”

Especially from the drivers that won the previous two before the Xfinity Series had a two-week break. Joey Logano won in the No. 22 car at California, a week after Brad Keselowski went to Victory Lane in Phoenix.

“Brad and Joey, they definitely reminded me that this week,” Blaney said.

Joe Gibbs Racing is the only other team in the series to win three straight races with the same car and different drivers. Kyle Busch, Tony Stewart and Denny Hamlin won consecutive races in their team’s No. 20 Toyota in 2008. That car actually made it four victories in a row when Stewart won again.

Christopher Bell finished 2.327 seconds behind Blaney in second place. Bell led twice for 10 laps, but isn’t sure if a pit penalty that put him at the tail end on a restart after a caution had a big impact on his outcome.

“I don’t know. There’s been a lot of people that have run second to the 22 here recently, so they obviously have something figured out,” Bell said. “It doesn’t matter who’s driving that thing, it goes really fast.”

It was the seventh career Xfinity victory for Blaney, who qualified fourth for Sunday’s Cup Series race at the 1½-mile Texas track.

Blaney had finished in the top eight in each of his first five Xfinity starts at Texas, where he was a three-time runner-up — including both races last year.

Some other things to know about the Xfinity Series race in Texas:

When the green flag waved, it was 34 degrees and cloudy.

Texas Motor Speedway officials said it was the coldest start for a NASCAR race at the track. The previous low was 47 degrees for an Xfinity race on April 14, 2007.

The temperature was about 50 degrees cooler than Friday, when it was near the mid-80s during the day for practice. Cold weather and misty conditions earlier Saturday cut qualifying to one round, instead of the usual three.

Xfinity drivers Cole Custer, Ryan Preece, Bell and Daniel Hemric qualified for next week’s $100,000 Dash For Cash at Bristol, a race which under new rules won’t include any drivers running who are running for the Cup Series tile.

Morgan Shepherd made his 1,000th start in a NASCAR national series race, becoming only the eighth driver to reach that milestone.

The 76-year-old Shepherd made his 426th start in the Xfinity Series, and also has 517 Cup Series starts and 57 Truck Series starts in a NASCAR career that dates back to 1970.

Shepherd finished 38th in the 40-car field after completing only 33 laps. It was his 78th consecutive start in which he didn’t finish the race (75 Xfinity races, two Cup Series and one Truck Series). The last time he was running at the end was an Xfinity race at Dover in September 2013.

Just Chillin’: Players, fans and dogs bundle up at…