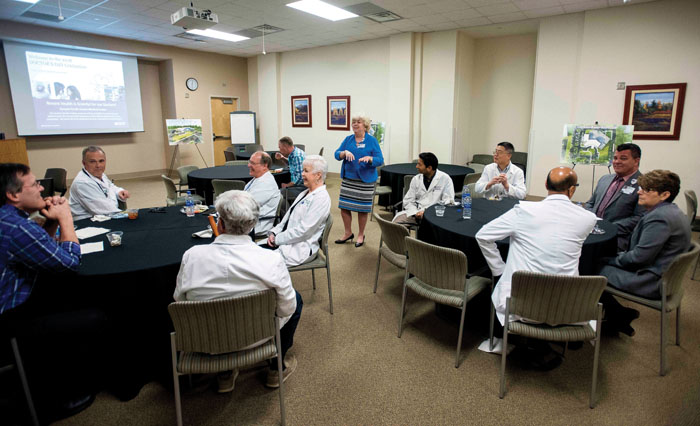 JON C. LAKEY / SALISBURY POST The hospital administration offered a lunch for the doctors in celebration of the National Doctor's Day to show their appreciation for their service. Novant Health Rowan Medical Center President Dari Caldwell offered some updates on projects that will be coming to the facilities in the near future. Novant Health Rowan Medical in Salisbury has reached their 10 anniversary of the local hospital merger with Novant Health. Novant Health is a network of physician clinics, outpatient centers and hospitals that cover a 4-state area. Tuesday, March 27, 2018, in Salisbury, N.C.

SALISBURY — This year marks the 10th anniversary of Novant Health’s merger with Rowan Regional Medical Center. In a rare, “This is Your Life” kind of moment, Novant Rowan President Dari Caldwell reflected on what her organization has brought to the area.

Caldwell rarely mentions that she holds a doctorate or that she was awarded the Order of the Long Leaf Pine in 2016, but she is direct and to the point when she’s talking about the hospital. She started her career as a trauma center nurse and has never looked back from the medical field.

Caldwell came to Rowan in 2010, two years after the merger. Soon after her arrival, she and the board launched their first five-year strategic plan. In 2015, they developed another.

Because health care changes so rapidly, she says, the plans are directional rather than goal-oriented — but they have led Novant to make many changes in the way healthcare is delivered in the Rowan community.

“One of the major things we recognized when we started looking at the community is we were underserved by the number of physicians, and therefore, access to care,” Caldwell says. “We had so many people in the community who didn’t have a doctor or couldn’t get in to see one.”

In the 10 years of Novant’s presence, she said, it has added a net total of 20 primary care providers and 22 new specialists.

In addition to adding physicians, Novant Health Rowan Medical Center worked to decentralize health care. Looking at population centers — where people are located — Novant took health care out to the people, where they are more likely to seek care.

Novant has opened practices in Kannapolis, China Grove and Granite Quarry. This year, the organization will open a practice in Cleveland.

In Salisbury, Novant has spread practices out so they’re not all in one central area. Today there’s a practice next door to Harris Teeter and one on Jake Alexander Boulevard in the former Manning Park — now Novant Health Professional Business Park. A practice in Rockwell has recently been acquired.

The American College of Surgeons gives accreditation for being a comprehensive community cancer center. Novant Rowan just re-accredited in late 2017.

“And 10 years ago, none of this existed,” Caldwell says. “We went from no organized services other than a few physicians doing the best they could, to being a comprehensive cancer center.”

The improvement by service line is not accidental. Caldwell meets twice a month with a team of physicians and board members to go every service line, considering what can be added, what is the next step, and what is beyond their reach.

“It’s my favorite meeting of the month. They all have an opinion on everything because they live and work in this community, and they care about the services we offer. Whether it’s Dr. Magryta with Pediatrics or Dr. Whitaker in ENT, or a cardiologist, or Ronnie Barrier in Family Medicine, Jesse Blumenthal — they will all talk about neurology or whatever. They’re that fully engaged.

“Our philosophy is if we can do something and we can do it really well, and have very high quality, we want to bring it to the community. If there’s something we’re not going to have enough of it to be good at it, we won’t try to deliver it. Open heart surgery, for example — you’ll always have to go out for that. We just don’t have the capacity to carry it off.”

As a result of scrutinizing services line by line, Novant Rowan has seen advances in cardiology, women’s services, orthopedics and the emergency room, among others.

“When Novant came in, our physicians helped re-establish the Cardiac Program,” Caldwell says. “Our cardiologists started the 24/7 response to heart attack, the STEMI program. When you have a heart attack, the sooner you can get in to the cath lab and get a balloon and get the vessel opened, and oxygen getting back to the heart, the better off you are going to be.

“When a patient comes in by EMS, they’ve already taken an EKG and transmitted it to the cardiologists’ iPhones. They can tell if the patient is actually having a heart attack, and can open the cath lab. We measure ‘door to balloon time,’ and we are well under the national average. It’s the gold standard we hold for ourselves. And it’s all the result of having that STEMI lab. That means we have to have cardiologists who can get here quickly any time of the day or night. And they do.”

Novant Rowan is a “Baby Friendly Hospital,” a designation created by the World Health Organization. When Novant gained the title, it was one of only 9 hospitals in the state to have it.

Being a Baby Friendly Hospital means the culture of the maternity ward meets certain criteria regarding babies staying with moms, skin-to-skin contact, and breastfeeding support, among other things.

Carrying the title is costly, as it means Novant cannot accept free formula from companies; the hospital must buy its own for those mothers who choose not to breastfeed. Because data shows that breastfeeding is the healthiest option, Baby Friendly Hospitals can’t accept free formula. Yet, Caldwell says, it is well worth it.

Orthopedics is the “crown jewel” at Novant Rowan, Caldwell says. It’s a strong asset for the hospital, particularly with the new NAVIO robotic surgery for hips and knees, which is less invasive. The hospital is a Blue Cross Blue Shield Center of Distinction for orthopedic surgery.

When Caldwell first arrived, the orthopedic surgeons insisted the community must have a wound care center. With a high rate of diabetes in the area, wounds often became infected and the amputation rate was too high. Caldwell heard their concerns and wound care was added to the spectrum of Novant’s services. Today, Caldwell says, most patients walk out when they leave — patients who would have undergone an amputation five years ago.

No one can talk about the progress of the past 10 years without noticing the new helicopter. Having a helicopter here cut in half the time a patient has to wait to be flown to a larger hospital. Those patients are usually in critical need of services of a large hospital, so it’s likely that having a helicopter here has literally saved lives.

“When I arrived, my predecessor Jeff Lindsay told me, ‘We have promised these people a Hospice House. If you don’t do anything else, you must get a Hospice House for this community.” She credits local philanthropists Tippie Miller and Libby Gish with carrying the flame for a hospice facility for years. “Little did I know when we built it I would lose two family members there.”

Caldwell also addresses the issue of a reputation. While acknowledging that Rowan Regional had its critics, she talks about how to correct perceptions.

“You have to work hard to change that. Old stories die hard. I knew it when I came here,” she says.

“It’s slow work, but you can never give up. You have to treat each and every patient as if he is the only patient we have. Every patient who has a good experience — we are one step closer to that goal. You just have to do it one person at a time. That’s the philosophy we’ve had. In most areas, we have turned that image around.”

Local board of directors

Local attorney Glenn Ketner served as the chair of the Board of Directors when they decided it was time to investigate a merger. He says they looked into it for three years before making a decision. The landscape of healthcare was rapidly changing, and it was a challenge for a small, local hospital to keep up. Using a consultant, they developed an RFP and initially attracted 10 potential partners. The board narrowed it down to two: Carolinas Health and Novant. After their initial presentations, the board called them back for a second presentation.

Ultimately the decision, which was unanimous, came down to local input. Novant was much more physician-friendly than CHC; a doctor didn’t have to be a member of a Novant group to maintain hospital privilege.

By contrast, Novant has welcomed the local board — carefully curated for diversity in location, age, gender, race, and work line — since the merger. Caldwell brags she has the best board ever — all very engaged and concerned for the well-being of their community.

Ketner looks back. “In my mind we made the best decision. I’m very confident we did the right thing. We have a fine president in Dari Caldwell. We have the finest physicians you’d encounter and have increased our specialties. Our partnerships with Forsyth and Presbyterian help us be stronger. We are part of an organization that is vibrant and alive. The leaders at Novant have vision.

“It’s so important to continue with a strong local board. This is our success. It wasn’t automatic; it wasn’t overnight, but we are a much stronger organization. Looking back, I have no doubt we made the right decision.”

Ketner was an original board member and most recently served three three-year terms.

Local physician Doug Shellhorn. a principal in Rowan Diagnostic Services, agrees it was a good decision for the community. Shellhorn grew up in Salisbury and returned to practice medicine. He points to the increased specialists available locally now — to the helicopter, the Hospice House, the proposed Cancer Center.

“It takes tremendous resources to bring in practitioners. We have so much progress now. Not only the hospital, but the practices we didn’t have before: Infectious disease; subspecialists; orthopedic subspecialists — they all help keep patients here.”

Looking to the future, Novant plans to build a comprehensive cancer center in Salisbury. The foundation has agreed to raise half of the necessary $24 million. The center will concentrate all cancer services under one roof so that patients with a life-changing diagnosis will no longer have to drive to many destinations for their care.

“We’ll be able to bring in sub-specialists a day or two a month until the center grows: GYN-oncology or surgical oncology. It will be a growth engine for us in terms of growing our services to the community.” Caldwell hopes to break ground mid-summer.