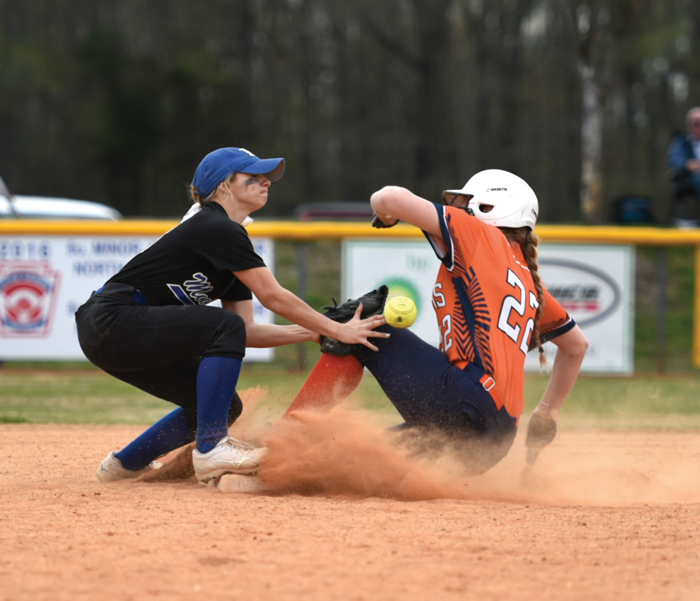 SALISBURY — The first punch is often the most important, and Mooresville sophomore Caitlyn Mann threw it.

Mann’s two-run homer with two outs in the second inning broke the ice and propelled the Blue Devils to a 6-2 win against Carson in a semifinal game on Friday in the Salisbury Civitan High School Softball Classic.

If Mann’s name sounds familiar,  it should. She was the catcher for the Rowan Little League softball squad that won the 2015 World Series in Oregon.

“That was a big hit by Mann to get us started,” Mooresville coach Ally Davis said. “And a big confidence-booster for her.”

Mooresville pushed its lead to 4-0 in the third inning, but after Katie Jewell moved from shortstop to the circle, Carson settled down and stayed in the game.

Rylie Stewart was the starting pitcher for Carson. She’d gotten back into town from a family trip to Florida at 2 a.m. on Friday morning. She had to be tired. She gave it her best shot.

“She wasn’t at her best, just wasn’t her usual self,” Carson coach Charissa Duncan said. “But Katie threw well. She gave us a chance to come back, and we know Rylie will get back on track.”

Carson cut its deficit to 4-2 in the fourth when Liza Simmerson drove in a run with the first of her two doubles and Skyler Smith hit a smash off Davis for an infield single.

“The toughest batter for me was their leadoff hitter (diminutive Maci Cooper),” Joelle Davis said. “I couldn’t throw anything but balls to her.”

But for the most part Mooresville, which added to its lead with a solo homer by leadoff hitter Hailey Lane, stayed in control.

Third-place game: Stewart got back on track as Carson (9-3) beat South Rowan, 4-2. She entered the game in relief of Jewell and nailed down the victory with four crisp innings. She allowed only one hit. Jewell homered.  Kary Hales, who was celebrating a birthday, went 3-for-3 with a triple and a double.  Carson was represented on the all-tournament team by Simmerson and Jewell. Mataya Reynolds drove in both runs for the Raiders (11-6). Haley Howerton scored the decisive run in the fourth on a passed ball.