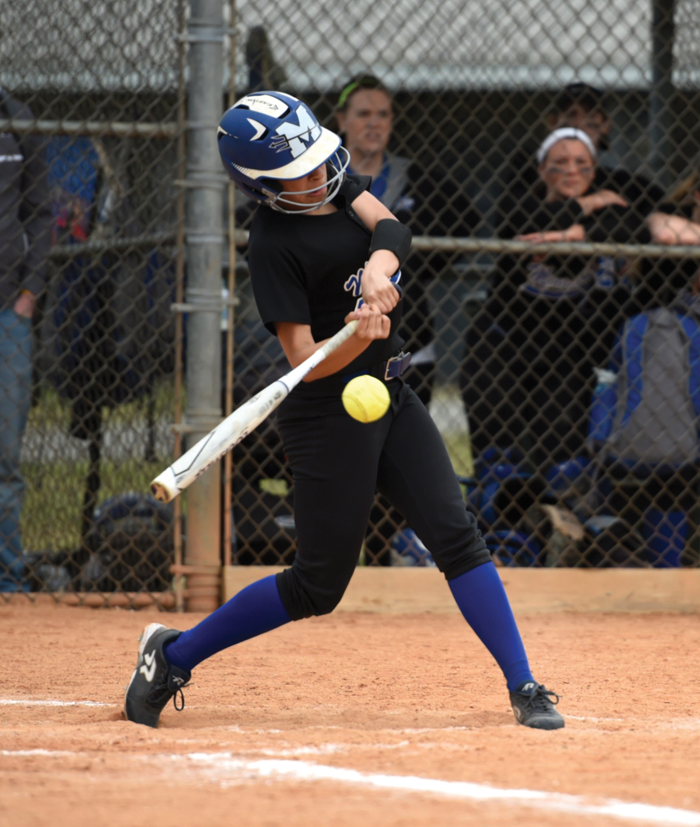 SALISBURY — Anyone who wants to play “Follow the Leader” will have to line up behind the Mooresville softball team.

The opportunistic Blue Devils have captured the inaugural Salisbury Civitan Classic — etching their name on the ledger’s top line by virtue of Friday’s 6-5 championship-game victory against West Rowan.

“I like being first,” triumphant coach Ally Davis said at Salisbury Community Park, where Mooresville (10-3) erased an early deficit and swept the tournament. “It does feel great because we kind of got off to a slow start this season. This was a good team win and something we really needed.”

Mooresville secured the title by spraying 12 hits around the park, including a pair of doubles by Jentri Meadows and a game-tying home run by Hailey Lane that was in the books while it was still in the air.

“They’ve got some good hitters,” losing pitcher Taylor Walton said after pitching her way into and out of trouble for six innings. “And they’re the type of team that doesn’t give up when they’re down. We had to work with that.”

After spotting Mooresville a two-run lead, West (10-4) got it working against starting pitcher Joelle Davis in the top of the third. The Falcons scored all of their runs in the span of seven at-bats, with clutch hits delivered by Parker Greene (a run-scoring single), Morgan Corriher (an RBI-double) and Hannah Pratt (a two-run single).

“We knew we had to score as many as we could,” said West coach Jimmy Greene. “Because Mooresville can hit. We never felt like we had enough.”

Pratt’s one-out hit chased Davis and forced Coach Davis to summon sophomore right-hander Kali Morton — a jayvee floater — to the pitching circle. Throwing with guile and precision, the 16-year old was far more effective, blanking West over the final 4 2/3 innings and allowing just two hits. She was rewarded with the tournament MVP Award.

Morton is a familiar name around these parts. At 13, she was the star pitcher for the 2015 Rowan team that won the Little League Softball World Series in Portland, Ore.

“Joelle didn’t really struggle,” Morton said. “They just caught up to her. It happens to everyone. But that wasn’t an easy situation to come in to.”

Coach Davis gushed over Morton, who has been used sparingly in relief this spring. “Jo has thrown the ball well all season, but she just didn’t have it tonight,” she said. “Kali was the opposite. She was great. She was able to get ahead of batters and then pitch off the plate. So whenever she threw strikes early, she was good.”

West still held a 5-2 lead in the last of the third when Pratt, a junior center-fielder, reeled in the catch of the day. With Ruthie Jackson aboard with her second base hit, slugger Hunter Edstrom launched a blast that technically cleared the fence — until Pratt elevated and stretched and gloved the line drive for an inning-ending putout.

“I went all the way to the fence and thought, ‘Oh my God, what do I do?'” she said. “I zoned everything out and just focused on getting the ball.”

“Our defense really showed up this week,” Coach Greene added. “That catch out there in center was one of the best I’ve ever seen. Her arm had to be three feet over the fence when she caught it.”

Walton was especially grateful. “That’s $5 I owe her for that one,” she smiled. “She saved me.”

Despite the web gem, Walton wasn’t able to silence the fierce-swinging Blue Devils. She surrendered four hits in the fourth inning, the last two when Lane crunched her third homer of the season on a two-out mistake pitch. Lane also scored the game’s decisive run in the last of the sixth, when she reached on a fielder’s choice, advanced all the way to third base on Taylor Cullen’s sacrifice bunt and crossed when Walton was called for an illegal pitch. Apparently she twice separated the ball from her glove while in contact with the pitching rubber, the equivalent of a balk in baseball. “It happens,” the freshman southpaw said. “Nobody’s perfect. You have to move on.”

West made one final charge up the hill in the top of the seventh. Parker Greene coaxed a leadoff walk but was erased when teammate Mary Sobataka bunted into a double play. “Mary had good intentions,” Greene said. “She saw the defense was playing back and tried to push it over the pitcher. Sometimes things don’t work out the way you hoped they would.”

And sometimes they do. Mooresville claimed the title when Lane, the do-it-all second-baseman, retired West’s Morgan Corriher on a game-ending groundout.

“It hurts a little but we played well,” Pratt concluded. “I don’t mind getting beat by a good team.”