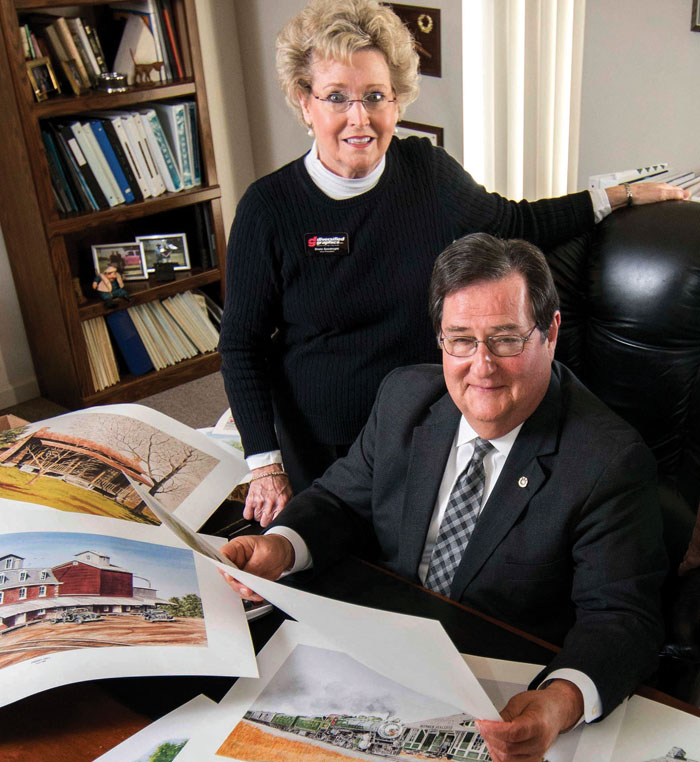 SALISBURY — Frank Goodnight, known as much for the interest he took in his community as he was for his acumen as a small businessman, died Friday at his downtown residence. He was 70.

Goodnight died overnight in his sleep after an evening of volunteering in the concession stand at the Salisbury Civitan Club’s High School Softball Tournament. Civitan President Mark Curran and Goodnight were planning to travel together to Whiteville on Friday afternoon for a district meeting.

Curran worked alongside Goodnight during the softball games.

“I was right there with him all night,” Curran wrote in a message to his fellow Civitans on Friday. “He was in good spirits and didn’t complain of any discomfort.”

Civitans held a moment of silence for Goodnight at the beginning of Friday’s softball play at Salisbury Community Park.

Frank’s wife of 50 years, Diane, was reportedly out of town vacationing with girlfriends when her husband died.

Frank and Diane Goodnight were business partners, owning and operating Diversified Graphics since 1974 as president and vice president, respectively. The business handles all manner of printing and over time has served clients up and down the East Coast.

It started out as Graphic Impressions on West Innes Street before changing to Diversified Graphics. The business has been located at 700 N. Long St. since 1991.

Throughout the day Friday as news of Goodnight’s death was posted on social media, people who knew him responded with shock, sadness, sympathy for Diane and comments that it is a big loss for the community.

Goodnight often went out of his way at the many events he attended to speak to the people he knew and had an ability to make many of his acquaintances feel as though they were best friends.

Through the years, Goodnight constantly participated on state and national committees with the National Federation of Independent Business, from which he received a Distinguished Service Award.

In 1995, he attended the White House Conference on Small Business with 46 other delegates from North Carolina. In 2000, U.S. Sen. Jesse Helms named Goodnight as a delegate to the Congressional Business Summit in Washington.

Through his positions with the NFIB in the state, Goodnight once moderated a 1996 gubernatorial forum between Gov. Jim Hunt and then-challenger U.S. Rep. Robin Hayes. It was part of Small Business Day in Raleigh.

Goodnight also was asked to preside at times over congressional and local candidate forums that were usually business-related.

Frank Goodnight had been a prominent member of the Rowan County Chamber of Commerce and Downtown Salisbury Inc.

In 1992-93, he led Downtown Salisbury’s  efforts to conduct a massive marketing survey in the central business district. He and Diane were strong proponents of residential living downtown and were longtime residents of The Plaza.

Back in the 1990s, Goodnight served as one of the Salisbury Post’s rotating writers for a Sunday business column called “Bottom Line.”

But beyond the business world, Goodnight seemed to be involved in every corner of civic life. Goodnight held a strong affinity for the arts, with organizations such as the Salisbury Symphony, Piedmont Players and United Arts Council.

He once served as chairman of the United Arts Council’s annual fund drive.

“For me, it was a labor of love,” Goodnight said in a Salisbury the Magazine story.

A man with a big persona and stickler for details, Goodnight was known for often being brutally honest with his employees and clients.

“And I appreciate that,” Sedberry told the magazine.

Frank and Diane Goodnight were big supporters of the National Association of Sportscasters and Sportswriters Association when its annual gatherings were held in Salisbury. It was at the NSSA parties and other events where the Goodnights often could showcase their considerable dancing talents.

The Goodnights belonged to St. John’s Lutheran Church, where Goodnight was a member of the choir and men’s chorus. When his chorus seat mate, the late Dan Brown, was struggling with memory issues, Goodnight quietly helped him keep track of the music.

A native of China Grove and graduate of South Rowan High School, Goodnight was the son of Mr. and Mrs. Lloyd L. Goodnight.

In high school, Frank belonged to the local 4-H club, and as a 15-year-old, he won the state 4-H’s top award for his grain marketing project. He was then among the students who attended the national 4-H Club Congress in Chicago.

Years later, Goodnight would be in Chicago again in 2001, attending a print show, when the Sept. 11 terrorist attacks occurred and effectively shut down airports. Two days later, he was in a rental car making his way back to Salisbury, telling a Post reporter by telephone that he just had to get back to work.

“There was no choice,” he said.

Funeral arrangements for Goodnight have yet to be completed.