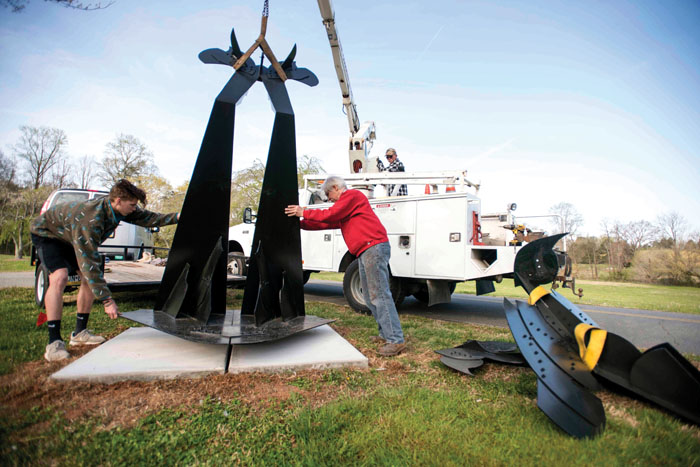 SALISBURY — Jason Morris and his wife, Liz, had never been to Salisbury before Friday.

Jason and Liz came to install two of Jason’s sculptures — “Mariachi” and “Funky Jazz” — for the 2018 Salisbury Sculpture Show.

Liz said they would have never visited Salisbury if Jason had not heard about the show from a neighbor in Lillington, a city about two hours east of Salisbury.

“It’s a cool place. I mean, much more than I thought it was going to be,” Liz said. “So this afternoon, we’ll probably walk around a little bit and see what’s here.”

Jason has been making sculptures — first from driftwood and then from scrap metal — since 2011. He said the Salisbury Sculpture Show is his first public installation.

“I’ve entered some more shows. This is the first one that I’ve been accepted to so far,” Jason said. “Just as long as people get to see it and enjoy it. If it makes them smile, man, that’s what it’s all about.”

He said he enjoyed installing the pieces himself and seeing them “out in the open where people can actually enjoy it.”

“I’ve got the ones that I’ve finished and the ones that I’m working on. They’re in my pasture. So I was just laughing and telling Liz, they’re from the pasture to the big city, to the concrete,” Jason said.

City urban design planner Alyssa Nelson said about half of the 17 artists selected for this year’s show are from North Carolina.

“Our city believes that art helps promote economic development,” Nelson said. “So art doesn’t just provide something beautiful or something to talk about.”

Nelson said the fact that all of the show’s sculptures are outside makes it an art experience for everyone.

“It’s a free show. We get school trips that will do the tour. Every summer, the Police Department has a camp and they will take the middle schoolers and do the tour,” Nelson said. “So it’s really about making art more accessible for everyone. And maybe that’s why it’s been so successful.”

This is the 10th year that Salisbury has hosted the sculpture show but the first year that pieces have been installed outside the city limits.

The Rowan County Tourism and Development Authority sponsored the county pieces as part of its kickoff to the yearlong Arts & Ag series.

The three sites where sculptures were installed outside Salisbury were Morgan Ridge Vineyards, Patterson Farm and Sloan Park.

Nelson said a committee of about 20 people selected 23 pieces from 70 entries this year. She said a second, smaller committee decided where to put the pieces in the city and county.

“We have a little more variety in the styles this year. I feel like we have more figural pieces this year. So we have geometric pieces, reclaimed materials, cast bronze,” Nelson said.

Ruden said the vertical sundial, which was put in front of the Rowan Public Library headquarters, was installed facing south so that it could accurately tell time.

Nelson said this year’s show has the most sculptures the committee has ever accepted — 23. That is, in part, because of the extra three sites in the county.

“It’s an honor that more people want to be a part of the show. We love that,” Nelson said.

Nelson said guides to the sites can be found in a number of locations, including Waterworks, Fine Frame, Pottery 101, City Hall and the Rowan County Tourism Development Authority.

Sculptures will remain in place until Jan. 31, though Nelson said they sometimes stay up longer.