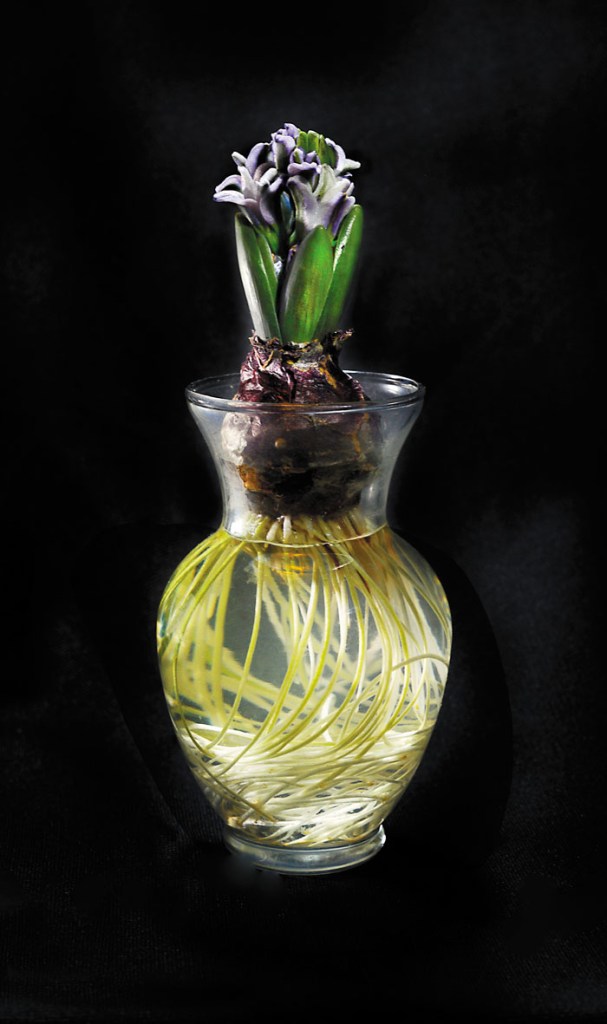 The beauty of a simple hyacinth growing in a clear glass vase. photo by Wayne Hinshaw, for the Salisbury Post

The hyacinth bulb is often given as a gift from one friend to another during the winter months. The roundish brown bulb can then be placed in a specially shaped vase that holds it above water as it grows white spaghetti-like roots.

The bulb then sprouts green shoots and, later, a sweet, fragrant violet flower.

Having watched my wife’s hyacinth sitting in the kitchen window for a month or so, I became attracted to watching the flower slowly develop.

As it matured into a bulb with roots, leaves and a flower, I couldn’t resist photographing the plant. I knew that it would be difficult to light the plant so the roots were visible as well as the flower. I set up my “home studio” on the kitchen table to capture the beauty of the flower that I saw.

An hour later, using three lights, I had the photo. I used one light behind the roots to illuminate them from the back. One light from the top was aimed straight down to light the bloom. I then needed the a third light from the right, focused on the green shoots to bring out their color.

The plant has a history in Greek mythology. Hyacinth was a handsome youth known for throwing a discus. As the story is told, he threw his discus in the air and then ran to catch it. The discus hit him in the head and killed him.

Apollo named a flower created from the blood of the fallen discus thrower the hyacinth.

I don’t know about the accuracy of Greek mythology, but it is a good tale to go with my photo.