The Masters: Opening-round leader Spieth back in comfort zone 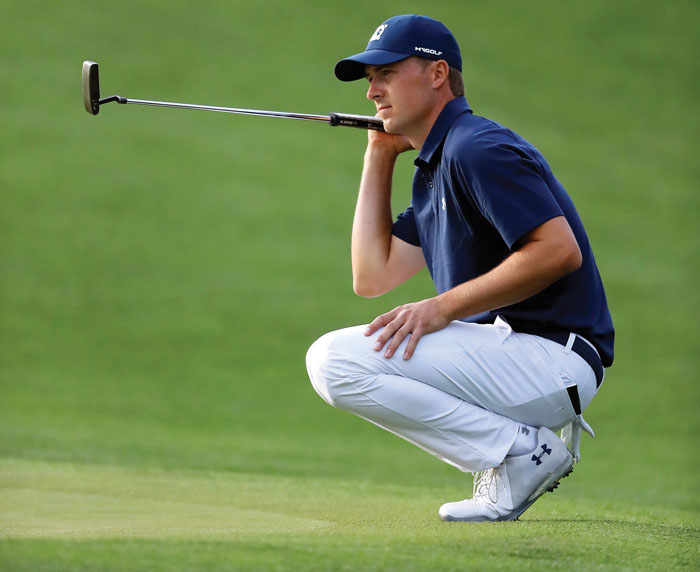 Jordan Spieth looks over his birdie putt on the 17th green during the first round at the Masters golf tournament Thursday, April 5, 2018, in Augusta, Ga. (Curtis Compton/Atlanta Journal-Constitution via AP)

AUGUSTA, Ga. (AP) — Tiger Woods attracted most of the attention. Jordan Spieth caused the most concern.

Opening day at the Masters had a wide-open feel until Spieth hit his stride Thursday afternoon. He saved three straight pars with that superb short game. He ran off three straight birdies to take the lead. And then he fired an 8-iron at the pin on the par-3 16th, letting the club twirl through his hands as he walked away, knowing only that it was another good one. It plopped down 5 feet away.

Spieth took only 10 putts on the back nine. He made five straight birdies, a career best for him in the majors. Even a bogey on the final hole felt like a par the way he navigated out of the trees and limited the damage with a pitch that stopped inches from going in.

That gave him a 6-under 66 and a two-shot lead over Tony Finau and Matt Kuchar.

It was the eighth time in his last 13 rounds at the Masters that Spieth ended a round with the lead. Given his short history at Augusta National — a victory, two runner-up finishes and a tie for 11th — his name atop the leaderboard gets attention.

Ditto for Woods, except that he has some catching up to do.

Woods failed to birdie any of the par 5s. He was under par one only one hole. He hit a 9-iron into Rae’s Creek. And only a pair of birdies over the last five holes enabled him to scratch out a 73 and at least stay in range, seven shots behind.

“Seventy-three is fine,” Woods said. “By the end of the week, this will be a pretty packed leaderboard the way the golf course is set up. They have it right where they want it. It’s really hard to run away from it, but it’s also really easy to lose it out there.”

Spieth could have built a bigger margin except for his wild tee shot to the left and into the trees on No. 18. Even so, his 66 sent a strong message.

“Absolutely, absolutely,” said Kuchar, who shot 31 on the back nine. “With the round he’s posted, the quality of golfer he is, he’s on some similar form. You can just kind of see good things happening, and particularly for him around here. His record is spectacular around here.”

Rory McIlroy, needing only a green jacket to compete the career Grand Slam, also took notice. He played in the group ahead of Spieth, and McIlroy was scratching our key par saves just to stay in range. He was in the large group at 69, the solid start McIlroy needed, especially with how Spieth was going.

It was the first time since 2011 that McIlroy broke 70 in the first round at Augusta.

“Jordan had a pretty strong finish there,” McIlroy said. “But this is my best start in a few years. It’s such a hard golf course to play catch up on.  If you start to chase it around here, that’s when you start to make mistakes.  But to be right up there and have the ability to stay patient, because of the position I’m in, that’s a nice luxury I have over the next few days.”

The best comeback? That might now belong to Finau.

On the eve of his first Masters, he made a hole-in-one on the seventh hole of the Par 3 Tournament, raced toward the green to celebrate and as he turned back toward the tee, his left ankle rolled. Finau went down, the ankle contorted, and he popped it into place. He wasn’t sure he could play until tests showed he was cleared to play.

And he played great, opening with a 68 despite a short par putt that he missed on the 14th hole.

“I was just extremely happy that nothing was seriously wrong with my foot,” he said. “Quite honestly, it was a pretty cool moment followed by probably one of my most embarrassing moments and a scary moment at the same time. It was quite crazy, all the emotions that I dealt with overnight, but I was more than ecstatic to just be walking to that first tee and be playing in my first Masters.”

It was just tough to score, with the greens slick and firm and several tough pin positions, mainly toward the front of the greens. That included the par-5 15th, and no one suffered quite like defending champion Sergio Garcia.

He hit his second shot into the water, and then had his next four shots with a wedge roll back into the water. He made a 10-foot putt — close to the same length of his eagle putt when he won last year — to make a 13, the highest score ever recorded on No. 15. He wound up with an 81, the highest score in the opening round by a defending Masters champion.

“It’s the first time in my career where I make a 13 without missing a shot,” Garcia said. “Simple as that.”

Phil Mickelson and Rickie Fowler were among those at 70. So was Marc Leishman, who played in the group with Woods and Tommy Fleetwood and led most of the day until a chip from behind the 15th green came out too strong and didn’t stop rolling until it was headed down the bank and into the water, leading to double bogey.

Woods, dressed all in black, felt as though he played better than he scored, and there was no sense of panic. He was tied for 29th. Only two players have started farther down the leaderboard after the first round and won the Masters — Woods in 2005 and Ian Woosnam in 1991.

In one sense, he was happy to be playing. Just under a year ago, he was going through a fourth back surgery.

“I played in a major championship again,” he said. “But also the fact that I got myself back in this tournament, and I could have easily let it slip away. And I fought hard to get it back in there, and I’m back in this championship. There’s a lot of holes to be played.”