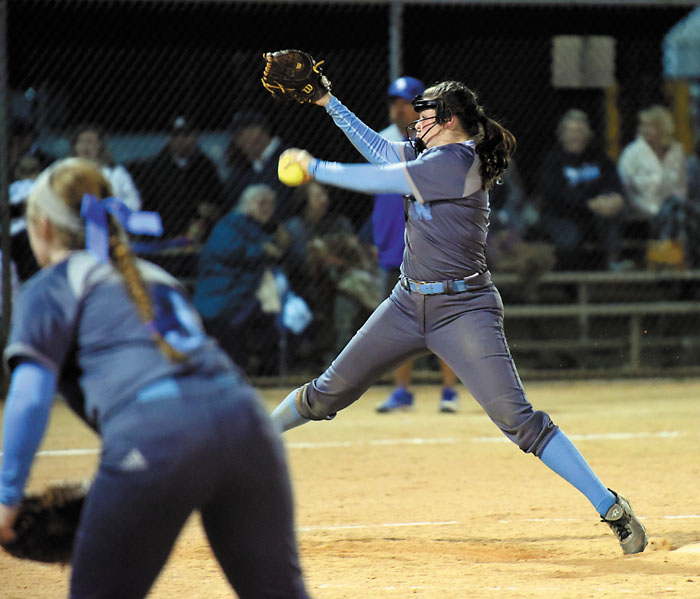 Wayne Hinshaw/for the Salisbury Post ... West Rowan’s Taylor Walton, right, pitched six innings for the win and also had three hits and four runs batted in for the Falcons on Thursday night against Mount Pleasant. The Falcons won, 12-8.

SALISBURY — The crowd was large and loud on opening day of the Salisbury Civitan High School Softball Classic, and West Rowan coach Jimmy Greene, a big booster of softball, ate it up.

“What a fantastic day for this first Civitan tournament and for softball in Rowan County,” Greene said. “Just really exciting games.”

As Greene’s team held on to beat Mount Pleasant, 12-8, he could hear the roars from an adjacent field where South Rowan, down 6-0 after the first inning, was making an improbable rally to beat East Rowan, 9-8.

West Rowan will play South Rowan in a semifinal today at 3 p.m. A tournament champion will be crowned later tonight.

West (9-3) overcame an early deficit and some adversity to win on Thursday. West starting pitcher Hannah Roberts only pitched one inning.

“She had a knot in her back, but she stretched it out and looked good in warmups,” Greene said. “But by the third or fourth batter, we knew she wasn’t herself.”

Mount Pleasant (11-2) started the bottom of the first with five straight hits and scored four runs for a 4-1 lead.

“Taylor had to locate to beat that team, she did,” Greene said. “They’ve got some monster hitters. They’re going to hit the Cheerwine sign if you don’t locate. We felt like we were going to hit the ball tonight. The only question was could we outscore them. Could we find a way to stop them, and Taylor did.”

Walton, a freshman, also made a difference with her bat. Her first-inning single put the Falcons on the board and she walloped a three-run homer in the fourth inning when West built a 10-5 lead.

Parker Greene, the senior catcher and the coach’s daughter, slugged a two-run homer in the second that put the Falcons ahead to stay. She also had a run-scoring double.

“She flew out her last time up to the warning track in center field,” Coach Greene. “That probably was the hardest ball she hit. She was on it tonight.”

Walton and Greene were huge because the Tigers weren’t giving Mary Sobataka, who has been a terror, much to swing at.   Sobataka walked twice.

Alexandra Linder swung the bat well at the top of the lineup, and Allison Ennis and Mary Sobataka had RBIs. Kaylin Dowling had her first varsity hit.

“The best thing about it was when we got down, 4-1, right off, no one hit the panic button,” Coach Greene said. “Everyone was like, “Hey, let’s go, we’ve got this.’ We didn’t play perfect, but we made some good defensive plays and we swung the bats.”