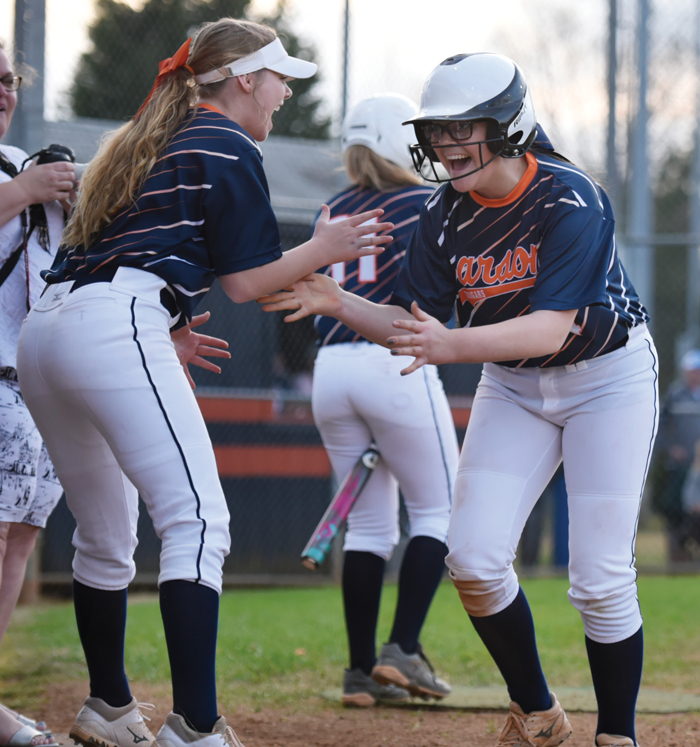 SALISBURY — Carson’s Katie Jewell is mostly a shortstop these days, but pitching used to be her job, and she’s no stranger to the circle.

With usual starting pitcher Rylie Stewart away on a family vacation, Jewell took the ball and led Carson to a 9-4 win against Central Cabarrus in a first-round game in the Salisbury Civitan High School Softball Classic. Jewell had pitched just four innings this season before working all seven Thursday against the Vikings.

“We just wanted Katie to keep it close and give us a chance,” Carson coach Charissa Duncan said. “She did exactly what we needed her to do.”

It was Jewell’s day. Not only did she pitch brilliantly — eight strikeouts, no walks, two earned runs — she got the game-deciding hit in the top of the seventh. Carson (7-2) played uphill most of the day but used a six-run explosion in the seventh to pull out the victory.

Central scored first, but Carson used two errors and Skyler Smith’s bloop single to right to make it 1-all in the second.

Tucker demolished a long homer to left-center leading off the fourth for a 2-1 Central lead.

“I was hitting my spots most of the day, but Central Cabarrus has some girls who can hit,” Jewell said. “Home runs are going to happen now and then. I just had to move on from it.”

Carson tied it again at 2-all in the fifth, with pinch-hitter Tate Barger driving an opposite-field double to knock in the run.

Central went right back on top in the bottom of the fifth. Three Carson errors came in a flurry, and the Vikings took advantage for a 4-2 lead.

Liza Simmerson hit a ball so hard through the left side in the sixth that it rolled to the fence in left-center. That blow brought home a run, and Carson trailed 4-3 going to the seventh.

“We’d had some bad plays, but we didn’t let anything get us down today,” Carson’s Hailey Howerton said. “We shook it off. We still believed we’d win the game.”

Tucker got the first out in the West seventh easily and then she got ahead of Barger. But then she hit Barger with a pitch.

“It got me right on the ankle,” said Barger, managing a small smile. “It hurt bad.”

Maci Cooper, a sprinter, ran for Barger and stole second on a close play. Next came  a bouncer to third base, and Central didn’t get anyone out.

Jewell was next, and she sent a blistering liner to center field for a hit. When the ball skipped  through to the fence, two runs scored and Carson had a 5-4 lead.

The Cougars weren’t done. Before the inning was over, Howerton had slapped a two-run single through the right side, and Madison Anderson, who came off the bench, had drilled a two-run double.

“We finally got the bats moving,” Howerton said.

Jewell got Central out 1-2-3 in the seventh to end it. The bottom five hitters in Centrals lineup went 0-for-15. Carson’s lineup was deeper — with two big hits by girls who began the game on the bench — and that made the difference.

“Some games this year I didn’t think we had enough fight in the late innings,” Duncan said. “But today we found a way to get the bats going against a really good pitcher. That was great to see.”

Carson will play in a 3 p.m. semifinal today at Salisbury Community Park against Mooresville. Mooresville (8-3) beat Cox Mill (6-4) in the first round.

Stewart could be back in the lineup today. Her family traveled back from Walt Disney World yesterday. With Jewell moving from shortstop to the circle, Kary Hales shifted from second base to short and Ellie Wilhelm jumped off the bench to play second base. “Shortstop isn’t Kary’s best position,” Duncan said. “But she can play anywhere.” .. Carson’s best defensive play was a diving grab by Smith, Carson’s catcher, on a foul popup.