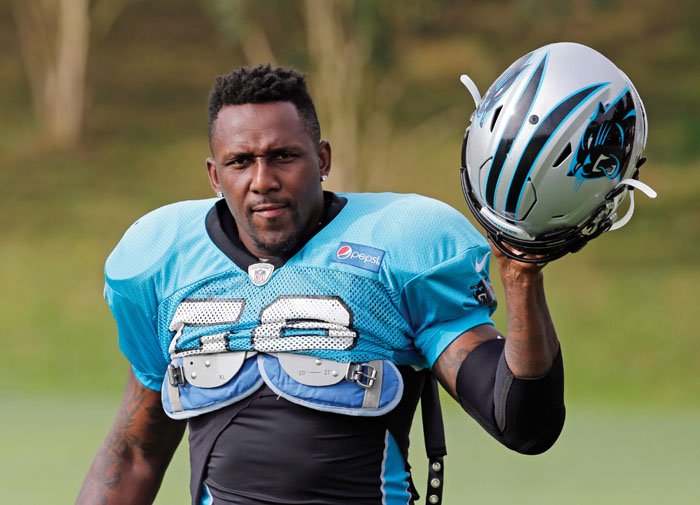 By STEVE REED, AP Sports Writer
CHARLOTTE, N.C. (AP) — Panthers three-time Pro Bowl linebacker Thomas Davis said he has been suspended by the NFL and will miss the first four games of next season after testing positive for a banned substance.
Davis posted a video on his Twitter account on Friday saying that he tested positive for an estrogen blocker.
“I was completely caught off guard by this,” said the 35-year-old Davis. “I have never done anything to intentionally try to cheat the game. It’s one of those situations where the NFL rules are clear. They state that you are responsible for what you put into your body.”
Davis, a former Walter Payton Man of the Year award winner, said he has been taking the same supplements for the last seven or eight years and never had any issues.
He said he has never tested positive for a steroid of HGH, and wanted fans to know that wasn’t the issue.
“Unfortunately this is some of the things that happen when you take supplements,” said Davis, Carolina’s all-time leading tackler.
Panthers general manager Marty Hurney did not immediately return phone calls seeking comment.
The 13-year NFL veteran has been one of the NFL’s success stories, returning from three separate torn ACLs in the same knee to play in three straight Pro Bowls (2015-17) and help the Panthers reach the playoffs in four of the last five seasons, including a Super Bowl appearance in 2015.
He is one of the most popular players in franchise history in large part because of how active and visible he is in the community.
He won the Walter Payton Man of the Year in 2015 — an award given to one NFL player each year for his volunteer and charity work, as well as his excellence on the field.
Davis said he has never done anything to try to create a competitive advantage over other players.
“I have always tried to do things the right way,” Davis said. “I can tell you guys that my conscience is clear in this situation and as bad as it hurts me to tell you this, I know it is going to hurt a lot of people who have looked up and believed in Thomas Davis over the years. But just know that in no way I have done anything to try to cheat this game.”
Davis said earlier this offseason that the 2018 season would be his last in the NFL.
But he left open the possibility of playing beyond 2018 on Friday, saying “who knows, maybe this isn’t my last year.”
___
For more NFL coverage: http://www.pro32.ap.org and http://www.twitter.com/AP_NFL