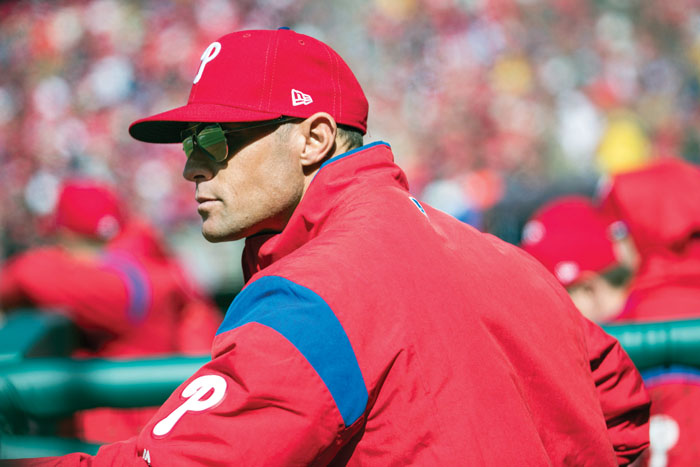 Philadelphia Phillies manager Gabe Kapler looks on from the dugout during the first inning of a baseball game against the Miami Marlins, Thursday, April 5, 2018, in Philadelphia. (AP Photo/Chris Szagola)

By ROB MAADDI, AP Sports Writer
PHILADELPHIA (AP) — Gabe Kapler got booed twice, Nick Pivetta received a standing ovation and the Philadelphia Phillies celebrated winning their home opener with a nightclub atmosphere in the clubhouse.
After several questionable decisions during a 1-4 trip to start the season, Kapler was booed during introductions before his first game as manager in Philadelphia. The boos were even louder when he pulled Pivetta in the sixth inning with a shutout intact, but the move worked out this time as the bullpen held on Thursday for a 5-0 win over the Miami Marlins.
“They cheer for the players,” Kapler said. “I’ll take that.”
Maikel Franco homered, tripled, singled and drove in four runs to boost the Phillies.
A week ago, in his first game as a big league manager, Kapler took out Aaron Nola in the sixth with a 5-0 lead after just 68 pitches. Atlanta rallied to win 8-5 and that move, along with multiple pitching changes, quirky shifts, and odd lineups, led to Kapler getting heavily criticized by fans and media.
“Whenever people are unhappy, I’ll always ask myself why and if there’s anything I can do to adjust accordingly,” Kapler said. “I’m gonna work my tail off for these fans. Hopefully, over the course of the season, they will learn to trust my process is strong.”
Pivetta fanned nine in 5 2/3 excellent innings, allowing four hits and no walks. Fans quickly went from booing Kapler to giving Pivetta a nice ovation while the skipper waited on the mound for reliever Adam Morgan to enter the game. Morgan retired the four batters he faced and Luis Garcia and Hector Neris combined on the four-hitter.
“It was the right move,” Pivetta said. “Gabe is an awesome manager. He always has our backs.”
The Phillies won a home opener for the first time since 2011, improving to 4-11 in 15 at Citizens Bank Park.
While Kapler got a tough Philly welcome, fans gave Philadelphia Eagles coach Doug Pederson and executive Howie Roseman the loudest cheers when they came out with the Vince Lombardi Trophy. The Super Bowl-winning coach fired a strike to Rhys Hoskins for the ceremonial first pitch.
Marlins starter Caleb Smith (0-1) allowed three runs and two hits in three innings. Three of the six batters he walked scored. Smith has nine walks in 8 1/3 innings in two starts.
“He didn’t have a good feel for the ball,” Marlins manager Don Mattingly said. “He had trouble getting untracked.”
Franco, who was 1 for 11 coming in, fell a double short of the cycle. He lined a two-run single to left after falling behind 0-2 in the count with two outs in the first to give the Phillies a 2-0 lead. Smith loaded the bases on three walks.
Odubel Herrera hit an RBI single up the middle to drive in Scott Kingery for a 3-0 lead in the third.
Franco hit a triple to deep center in the fifth and launched a two-run shot to left off Jarlin Garcia in the seventh.
“I’m just trying to see the ball and out good contact on it,” Franco said.
Hip-hop music blared in a dim clubhouse as colorful laser lights bounced off the ceiling as players walked in after the game.
“When we win, we have to have fun,” Franco said.
HONORING ROY
The Phillies held a moment of silence for the late Roy Halladay and showed a video tribute featuring the final outs of his perfect game against the Marlins in May 2010 and his postseason no-hitter against the Reds that October.
Pederson wore Halladay’s No. 34 jersey to the mound.
“I think it’s a great way for me and the Eagles organization to represent him and the Phillies,” Pederson said. “It’s special. I really wanted to honor him with wearing it.”
TRAINER’S ROOM
Marlins: OF Garrett Cooper was played on the 10-day disabled list because of a right wrist contusion. OF Braxton Lee was recalled from Triple-A New Orleans to take his spot.
UP NEXT
Marlins: LHP Dillon Peters (0-0, 0.00 ERA) makes his second start Saturday after the team’s take Friday off. He has a 1.38 ERA in two no-decisions vs. the Phillies.
Phillies: RHP Vince Velasquez (0-1, 13.50 ERA) takes the mound Saturday. He’s 2-1, 2.84 in six career starts vs. the Marlins.
___
More AP baseball: https://apnews.com/tag/MLBbaseball

Cora ready for ups and downs despite win in…