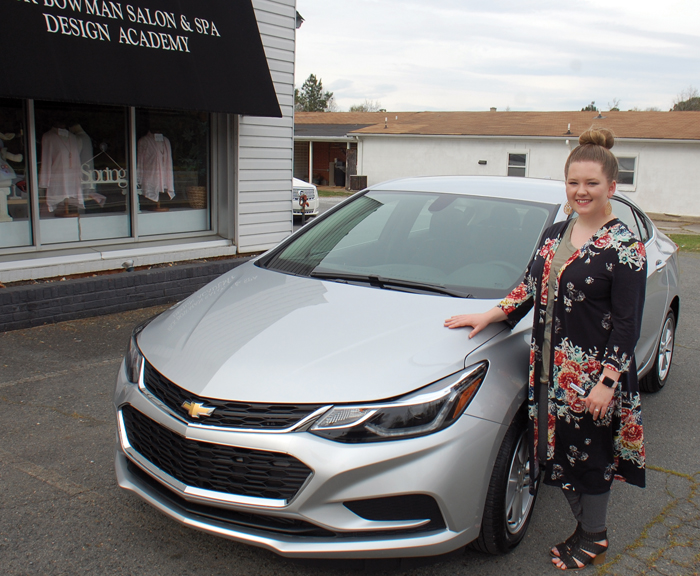 Morgan Bowman stands Monday afternoon with the 2018 Chevy Cruze she had just received from Mary Kay. Bowman, a Liberty University senior from Salisbury, met a four-month sales goal with her team that qualified her for the car. Mark Wineka/Salisbury Post

SALISBURY — Morgan Bowman has a lot on her plate these days.

With all of this going on, 21-year-old Morgan has earned director status with the Mary Kay cosmetics company. Thanks to the sales she and her team put together over a recent four-month period, Bowman qualified for a Mary Kay car.

Morgan picked up her car at the Ben Mynatt dealership in Concord on Monday before heading back to school.

Many people are familiar with the pink Mary Kay Cadillacs often awarded to the company’s top sales people.

But Bowman’s car is a silver 2018 Chevrolet Cruze with “Mary Kay” emblazoned on the sides and back. Mary Kay leases the car on Morgan’s behalf. The company also pays 85 percent on her car insurance.

A charcoal Equinox is next on the rung, followed by the traditional pink Cadillac. But for now, Morgan is completely satisfied with driving her new Cruze, which replaces a 2005 PT Cruiser convertible she had at college.

Her new car had only seven miles on the odometer when she drove off the car lot.

“It drives really smooth,” Morgan reported Monday after arriving at Attractions on Main, the longtime dress and style shop her parents, Rick and Deborah Bowman, own on South Main Street.

Morgan drove back from the dealership with friend, team member and fellow Liberty University student Savanna Alligood and grandmother Jeanette Kesinger as her passengers.

Morgan has been selling Mary Kay products since October 2015, when she gave her first facial to family friend Judy Page. Page was at the shop Monday afternoon when Morgan arrived in the new car.

Deborah Bowman had sold for Mary Kay about 25 years ago and knew what kind of work was involved to be successful. She wanted Morgan to concentrate on school and also enjoy college life.

“I really didn’t want her to sign up,” Deborah said.

But Morgan went through with her debut Mary Kay party, and Deborah and Rick set aside an attractive corner at Attractions on Main for customers to try out the Mary Kay lines and have free facials and makeovers — big selling points.

With Morgan and her mom, it all starts with skin care products, then “glamor” sessions with the cosmetics.

“The customers seem to like her,” Deborah said of her daughter. “… Our customers have been the best and very supportive.”

Morgan would work at the shop on breaks and sell Mary Kay at school and wherever else she could. Meanwhile, she established a team of 24 members working with her, including Deborah.

Deborah emphasizes she personally isn’t participating in Mary Kay to climb the sales ladder. Rather, she wants to provide an extra service to her clients and help the dress shop overall.

The new car is the result of a sales push from November through February, when Morgan’s team made the sales goal necessary for a silver Cruze. “Mom did awesome in November,” she said.

It was only halfway through November that Morgan decided she was going for the car.

How do you juggle class work, film projects and a sales job? Morgan credits making out a weekly schedule and sticking to it.

“You have to be smart about your time,” she said. There are times you have to say “no” to your friends and “yes” to school, Morgan added. But she has always liked the flexibility selling Mary Kay gives her.

“It was just like any other job, except I got to decide when I wanted to work,” Morgan said.

Beyond the flexibility and commissions, Morgan appreciates the 50 percent discount she receives on Mary Kay products, which she believes in because they aren’t animal-based. The company also is Christian-based, which is important to her, and there is a humanitarian side.

Morgan said several new homes have been built in Nicaragua because the national sales director sets aside portions of her checks for that cause.

The job also relies on relationships between sales personnel and their clients — another thing Morgan appreciates.

Morgan and fiance Jordan, an accounting major, have known each other since the seventh grade at North Hills Christian School. Morgan claims she used to be a head taller than he was.

Jordan said he helps with Morgan’s busy schedule at times by running errands for her and otherwise, “I do try to recommend people to Morgan.”

Morgan has been able to stay on the dean’s list at Liberty University six out of her last seven semesters. Her recent success made her a director of a unit, which is named “Ignite.”

“I love leading a team,” Morgan said. “That’s one of my favorite things.”

Directors are paid better, evidence to Deborah that “hard work pays off.”

“The harder you work, the greater the reward,” Rick added.

Morgan looks at life in terms of God, family and career, in that order. “I plan my business around my life,” she said. “I don’t plan my life around my business.”

Selling Mary Kay and getting new cars every now and then is not Morgan’s end game. Her professional career more likely will involve writing, directing and producing movies, music videos and shows, she said.