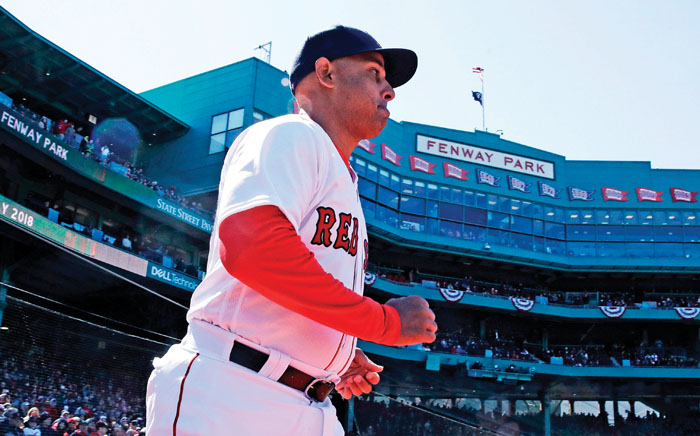 Boston Red Sox manager Alex Cora runs onto the field as he is introduced during ceremonies prior to a home opener baseball game against the Tampa Bay Rays at Fenway Park in Boston, Thursday, April 5, 2018. (AP Photo/Charles Krupa)

By KYLE HIGHTOWER, AP Sports Writer
BOSTON (AP) — When Alex Cora’s name was introduced prior to Boston’s home opener against the Tampa Bay Rays, the new Red Sox manager jogged up the steps of the dugout and proceeded to calmly high-five members of his coaching staff and players.
Despite receiving one of the loudest ovations from the Fenway Park fans during Thursday’s pregame ceremonies, the 42-year-old first-time skipper gave only a quick acknowledgment to the crowd once he reached the end of the line.
It seemed like a muted reaction for a guy who is assuming one of the most expectation-laden jobs in baseball.
And that’s exactly how Cora wanted it to be.
Yes, Cora is the first minority manager of in Red Sox history. And yes, he is a first-time skipper just seven years removed from his final season as a major league player.
But he’s also someone who very much feels equipped for the opportunity he’s been given.
“This is a place where the experience is awesome … But you can’t get caught up in it,” Cora said. “Playing in this place, this is my office. Fenway Park. Not everybody can say that. The other 29 managers can’t say that. I can. It’s a special place. I’m having fun with it.”
Cora insisted he wasn’t trying to downplay the moment.
“It’s not that I’m hiding my emotions,” he said. “It’s just how I feel and how I’ve been feeling for a while now. I’m a big league manager. I feel comfortable doing my job and that’s where I’m at.”
After a season-opening loss at Tampa Bay, the Red Sox have reeled off six straight victories, including Thursday’s 3-2 comeback win over the Rays in 12 innings.
It’s brought instant excitement to a team that has been eliminated in the division round of the postseason each of the past two seasons despite winning back-to-back AL Easts titles for the first time in franchise history.
As a bench coach on last year’s World Series champion Houston Astros, Cora is fresh off experiencing the pinnacle of major league success. He’s also tasted it as a player as a member of Boston’s 2007 championship team.
It’s one of the things that have helped him remain composed despite his new job title.
“I know I’m going to have good days, bad days, horrible days. I know that,” he said. “But I’ll keep it simple.”
Cora makes his offseason home in Caguas, Puerto Rico, so he’s renting a house during the season in Boston. It necessitated a trip to Target on Wednesday to buy some furnishings and diapers for his twin sons.
He managed to get through the experience without being recognized — another win in his book.
If anything, Cora said Thursday’s game was a celebration more for his support system, which includes his girlfriend, Angelica, and children, as well as family that flew in from Puerto Rico to be in attendance.
“I know who I am. I know what I represent. But I got family. I had family flying in yesterday. It was just a regular day,” he said.
Another one of the people that have helped him stay grounded is his older brother, Joey Cora, now a coach with the Pittsburgh Pirates.
Alex said he received a text from him after Boston’s season-opening loss at Tampa last week. Joey’s advice that day still sticks with him.
“He’s like, ‘Hey, you learn and move on. You’re gonna have more days like that,'” Alex Cora recalled it saying. “You learn and you move on. I think that was the best advice I had that day.”
He said those doors swing both ways with Joey actually reaching out to pick his brain recently as well.
“Joey’s very special for me. He’s very special,” Cora said. “He’s proud of his little brother. Let’s put it that way. He’s my biggest fan. And I know whatever he sees from afar he’s gonna let me know because he wants me to do good.”
___
More AP baseball: www.apnews.com/tags/MLBbaseball
___
Follow Kyle Hightower on Twitter a http://www.twitter.com/khightower