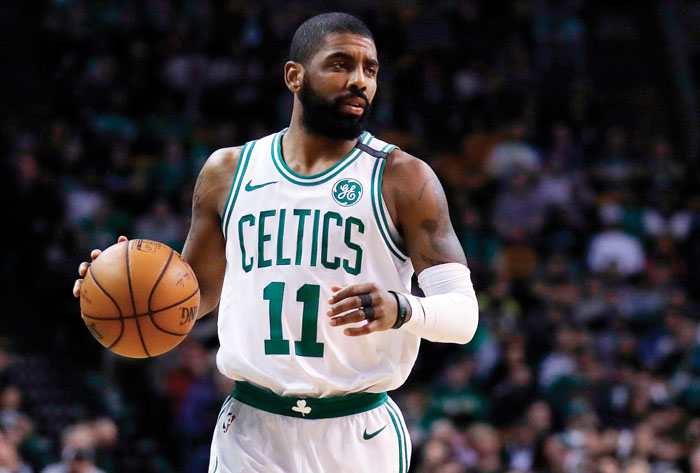 FILE - In this Feb. 28, 2018, file photo, Boston Celtics guard Kyrie Irving (11) moves down court during the first quarter of an NBA basketball game in Boston. A person with knowledge of the situation says Celtics point guard Kyrie Irving will miss the rest of the regular season and playoffs after surgery on his left knee. The official spoke on the condition of anonymity to The Associated Press because the team has not released the news. (AP Photo/Charles Krupa)

BOSTON (AP) — The Boston Celtics have spent most of the season adjusting on the fly. Now they will have to go through the playoffs without Kyrie Irving.

The star point guard will need surgery on his left knee and is done for season. On Thursday, the team put his recovery time at four to five months.

Irving hasn’t played since March 11 and says he won’t dwell on what might have been.

“The hardest thing to do sometimes is accept the uncontrollable things life throws at you,” he wrote in an Instagram post. “It’s simply a test of your perseverance and will, to be present, even in the wake of what’s going on.”

In the upcoming surgery, two screws will be removed. They were implanted after Irving’s patellar fracture during the 2015 NBA Finals. Irving recently developed an infection at the site of the screws, and now they must be taken out.

Following his original procedure last month, the team had said the knee was structurally sound and the kneecap healed, but the wire had been putting pressure on the knee.

This is Irving’s first season in Boston after he demanded to be traded from Cleveland.

“This season was only a snapshot of what’s to come from me,” he said in his post. “Trust Me. The journey back to the top of Mt. Everest continues.”

Cavaliers coach Tyronn Lue awoke from an afternoon nap to texts about Irving. He was sorry to learn about the guard’s ordeal. After all, Irving made the biggest shot in Cleveland history, a go-ahead 3-pointer in the closing minutes of Game 7 in the 2016 Finals.

“He was a big part of what we did here, a big part of winning the championship and even though he’s on another team you still don’t want to see anyone go through that,” Lue said. “I know how competitive he is and I know how much he wants to win and to go through this and not be able to play in the postseason is tough for him, so prayers go out to him and his family. I wish him the best.”

This latest news isn’t surprising considering the tight recovery window Irving faced. But it is a blow to a Celtics team that had been playing well despite a run of recent injuries to key players. Boston will likely enter the playoffs as the No. 2 seed behind Toronto.

In addition to Irving, Marcus Smart is sidelined following right thumb surgery and Daniel Theis is out for the season after left knee surgery. And Gordon Hayward is not expected back as he recovers from his gruesome ankle injury in the season opener.

While Toronto will most likely enter the postseason with the East’s top seed, the conference was still considered to be wide open prior to Irving’s injury.

With Irving out, the Celtics will now need someone to be the sparkplug for a team that had been hoping to make a run at the conference title following last year’s loss to Cleveland in the conference finals.

Boston certainly takes a hit without Irving, but it has been making adjustments to its rotation for weeks. Irving has been out for the last 11 games, with Boston going 7-4 without him.

The hole his absence created has been filled nicely by reserve Terry Rozier, who is playing his best basketball in his third year in the league. He has appeared in 77 of 78 games, starting 13. He’s made the most of his extra floor time, averaging 11.4 points, 4.6 rebounds and 2.8 assists — all career highs.

Others have stepped up as well.

Veteran Al Horford and second-year forward Jaylen Brown have also had their moments over the second half of the season.

The question is whether a by-committee approach will be enough against potential first-round opponents, which could be Miami, Washington or Milwaukee.