Travel down the rabbit hole with Piedmont Players Youth Theatre 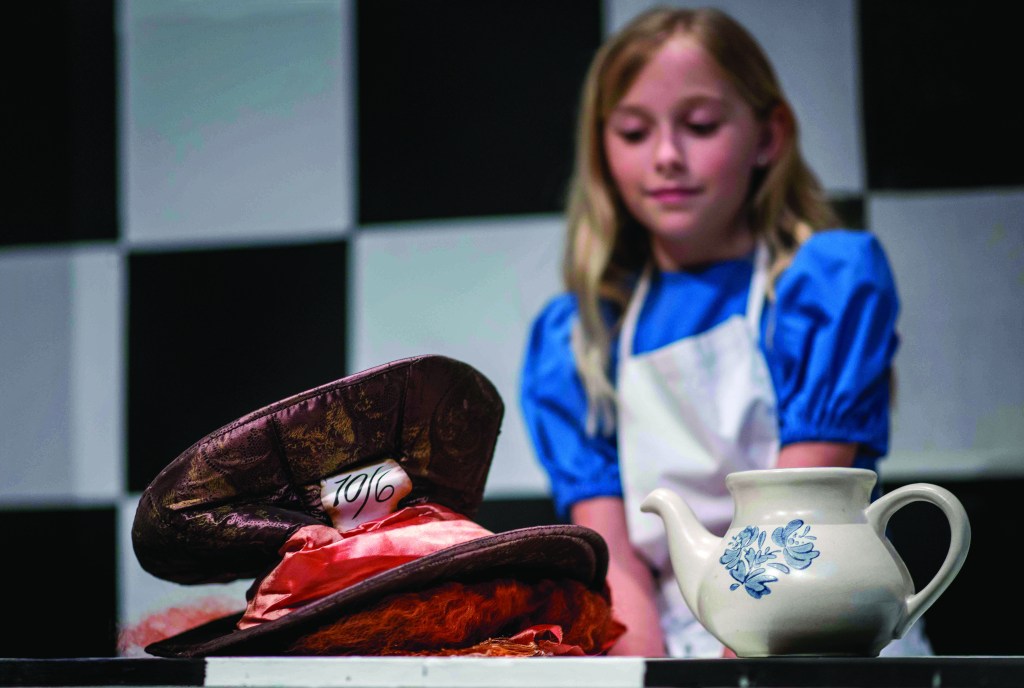 When Alice (Gracie Spieler, Aaliyah Cain), a restless young girl, chases the White Rabbit (Reagan Carpenter) down a rabbit hole, she enters a magical world where she encounters an odd assortment of characters; including the grinning Cheshire Cat (Laura Bullock) and the nuttiest tea party ever, including the goofy Mad Hatter (Elijah Carpenter), the March Hare (Elliott Smith) and the Dormouse (Bryce Zino). When Alice ends up in the court of the tyrannical Queen of Hearts (Grace McCoy), she must stay on the ruler’s good side — or risk losing her head.

Lewis Carroll’s beloved fantasy tale will come to life on the Norvell Theater stage beginning next Thursday night, as Austin Young directs a cast of more than 20 wonderfully wacky characters in awe-inspiring costumes by Eastern Costume Company with a fantastic set designed by PPT Resident Director Reid Leonard. PPT’s fourth youth production of the season, “Alice in Wonderland” is based on the 1865 novel Alice’s Adventures in Wonderland, written by English author Charles Lutwidge Dodgson under the pseudonym Lewis Carroll. 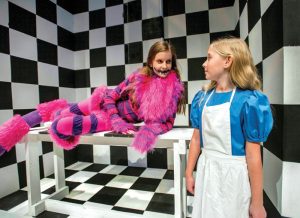 The Cheshire Cat is played by Laura Bullock and Alice is played by Gracie Spieler. JON C. LAKEY / SALISBURY POST

An immediate success, it tells the story of a girl named Alice falling through a rabbit hole into a fantasy world populated by peculiar, anthropomorphic creatures. Alice’s challenge is to grow into a strong and compassionate person despite the idiosyncrasies of the creatures she meets. She is forced to adapt and learn with each new encounter while retaining a sense of justice and beginning to develop a sense of self.

Carroll’s sense of the absurd and his play with logic and language have made the story (and its sequel, Through The Looking Glass) popular with adults as well as children. The books stand as evidence that children’s literature need not talk down to its audience. In fact, it is the depth and sophistication of the Alice books that has won them recognition as some of the best children’s literature ever written.

In 1951, Walt Disney released an animated feature film version with a focus on the comedy and whimsical side to Carroll’s books. Although initially a box office flop, the film’s rerelease in 1974 was so popular that it warranted a second rerelease in 1981. Later, with the advent of the home video market, Disney made “Alice in Wonderland” one of the first titles available for the video rental market. The Disney version has since been regarded as one of Disney’s greatest animated classics as well as one of the best film adaptations and most popular versions of the story.

Join Alice on her journey into a topsy-turvy world that gets “curiouser and curiouser” as her fantastical adventures unfold live on stage.