The Masters: Hype unlike any other, mainly because of Tiger Woods 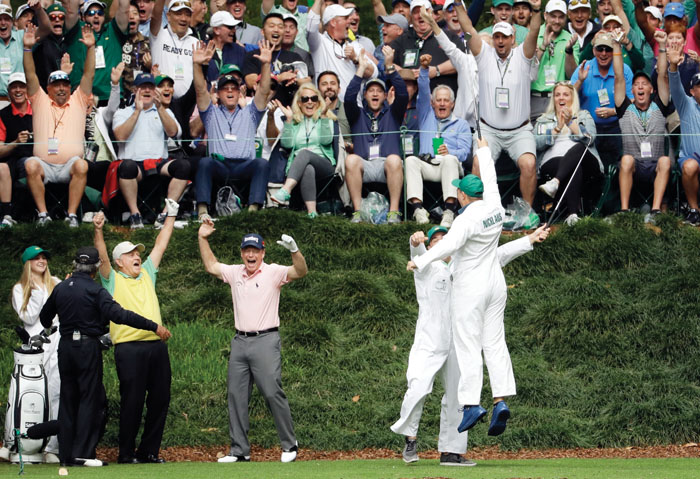 Jack Nicklaus' grandson and caddie GT Nicklaus reacts after his hole-in-one on the ninth hole during the par three competition at the Masters golf tournament Wednesday, April 4, 2018, in Augusta, Ga. (AP Photo/Matt Slocum)

AUGUSTA, Ga. (AP) — Blame it on a generation that thinks nothing was ever as great as what just happened.

Maybe it was a tough winter, and nothing melts frigid memories like the sight of azaleas, dogwoods and Rae’s Creek. It sure didn’t hurt that all the best players, as young as 23-year-old Jon Rahm and ancient as 47-year-old Phil Mickelson, are winning tournaments and hitting their stride.

The competition is so steep that four players have a chance to be No. 1 in the world.

“This is my 42nd Masters,” club chairman Fred Ridley said Wednesday. “I have never been a part of this week where there’s been any more excitement.”

But the real reason for all the talk that this Masters might be the best ever still comes down to one guy: Tiger Woods.

In San Diego and Los Angeles, in Tampa and Orlando, fans flocked by the thousands when Woods returned to competition after a fourth back surgery and suddenly looked very much like a 14-time major champion capable of resuming his pursuit of the 18 majors won by Jack Nicklaus.

He was back to producing Sunday-sounding roars at the Masters by making eagles on the back nine. And those were just practice rounds.

Woods had one word for all this buzz: whoa.

No one knows hype like Woods, especially at Augusta National. A generation ago, he had a chance to become the first player to hold all four professional majors, and he heard all about it for more than seven months leading into the Masters. He beat two of his biggest rivals of 2001, Mickelson and David Duval.

“It’s the same thing,” Woods said. “I’ve got to go play and then let the chips fall where they may. And hopefully, I end up on top. But I’ve got a lot of work to do between then and now.”

Woods, who spent two days at Augusta National last week, has played nine-hole practice rounds for three days leading to the first round Thursday. Fred Couples has been at his side for all of them, and he didn’t see much different from 10 years ago.

“It was pretty awesome,” Couples said.

Never mind that it has been 13 years since Woods last won the Masters. Just imagine.

This is the first major Woods has played since 2015. He doesn’t know of anyone who has competed at the highest level since fusion surgery on the lumbar area of the back, much less anyone who could generate 129 mph of club speed with the driver. Just 10 months, the most famous photo of him came from a Florida jail after his arrest on a DUI charge stemming from the wrong combination of prescription drugs.

It was one of the lower moments in his life.

That’s four long days away, assuming he makes it that far — Woods has missed the cut in every major but the Masters — and there are plenty of obstacles along the way. Woods has been gone for so long that he says it’s been nearly three years since he putted on bent grass like that at Augusta National.

The bigger issue might be a dozen or more other contenders, all of whom earned their share of the hype.

That list includes Woods’ new practice-round partner — Mickelson — who is coming off another World Golf Championship title; Mickelson won the Mexico Championship to end the longest drought of his career.

The No. 1 player in the world has not won the Masters since 2002 — it was Woods, of course — a streak that Dustin Johnson would love to end. Johnson didn’t get the chance last year after he slipped down the stairs and wrenched his back on the eve of the Masters. Johnson began the year with an eight-shot victory at Kapalua. Rahm won two weeks later to move closer to No. 1 in the world. Jason Day won the week after that.

One of the two tournaments where Woods contended on the back nine was the Arnold Palmer Invitational. Rory McIlroy won with five birdies on his last six holes. A victory this week would put him in company with Woods by completing the career Grand Slam.

McIlroy knows what it’s like to have so much attention. His first crack at the career slam was in 2015. He was 12 shots behind after two rounds.

“I felt like there was a lot of hype coming off the two majors the summer before and world No. 1 and going for the slam the first time. I felt that anticipation and that hype, and I nearly built it up in my head a little bit too much,” he said.

Maybe it will help McIlroy, Day and so many others because of the attention on Woods. Or maybe it doesn’t matter.

Regardless of who’s playing, Augusta National rarely disappoints when it comes to excitement.

“I come here with one goal, and that is to win the tournament,” McIlroy said. “And I’m sure everyone that’s playing this tournament has the same goals and objectives. If I’m under the radar or not, it doesn’t matter. I just need to go out and play good golf.”