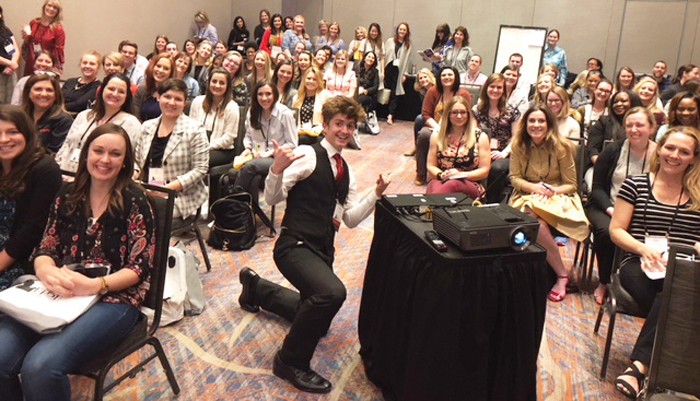 15-year-old Jonathan Mosher poses with the crowd that turned out to hear him speak about life with cochlear implants and his love of sports at a national conference in Denver, CO. Submitted photo

SALISBURY — Jonathan Mosher is no stranger to advocacy work. The 15-year-old has been working to inform people about cochlear implants and early detection of hearing loss for more than 10 years, using his own story.

But recently, Jonathan had a chance to reach a wider audience — as a guest at the 2018 National Early Hearing Detection and Intervention meeting in Denver. More than 1,000 people from across the country came to the meeting, and many got a chance to hear Jonathan talk about his life and his love of sports.

Patrice Mosher Spillane said her son was identified as having severe profound hearing loss just after birth, when he failed a newborn hearing screen. But Spillane wasn’t daunted. She had eight years as a speech therapist under her belt when Jonathan was born in 2002. At the time, she was working at China Grove Middle School with a variety of students with hearing impairment.

“So it was almost like God was giving me this buffet of kids to choose from,” she said.

She could teach her son sign language and cued speech or choose to have him get cochlear implants. Eventually, she was inspired by a student who had implants and who was athletic and academically gifted.

Jonathan was equipped with hearing aids at 9 weeks old and began speech therapy. He received his first implant in his left ear when he was a year old. At 5, he received his second implant, in his right ear.

Together, Spillane and Jonathan decided to advocate for early detection of hearing loss.

“Whenever you have a child with a hearing loss, the whole key is early identification. Because the sooner that you know, the sooner you can do something to make a difference,” Spillane said.

They partnered with the company that made Jonathan’s implants, MED-EL, to help inform and coach families who were considering cochlear implants for their own children.

“We come give them a little information about our journey,” Spillane said.

Jonathan said these opportunities help him hone his communication skills and “demolish” his fear of public speaking.

“I think it’s just a healthy thing to do,” he said.

While he does get pre-presentation jitters, he’s able to overcome them.

“I think it just teaches you more than you would if you were a normal teenager,” he said of advocating for young people like himself.

At 15, Jonathan has spoken at camps, panel discussions and meetings. But the Denver meeting was his largest crowd yet.

“They want to hear his journey and his experiences,” Spillane said. “And families want to ask him questions — professionals like speech therapists and teachers of the deaf, audiologists and stuff like that.”

Being able to give back and advocate for early identification made mother and son proud.

“EDHI was one of the reasons he was identified when he was,” Spillane said.

Jonathan gave a presentation called “OMG: On My Game” about his love for and success in athletics. The crowd, he said proudly, was standing room only.

Jonathan started playing sports when he was 3 in local YMCA leagues. He started out with simpler sports like T-ball but over the years has progressed to baseball, basketball, soccer and flag football.

“I didn’t know how well he was going to do,” Spillane said, “but I just knew his hearing loss was not going to hold him back.”

It did take some adjustments. Jonathan read books before starting each sport to be sure he knew the terminology and how the game was played. Some gear — like the foam padding inside a T-ball helmet — had to be removed or adjusted.

Now a freshman at North Hills Christian School, Jonathan is well-known for his signature soccer move: a head butt in which he quickly removes his Rondos — single-unit processors worn on the side of the head — then heads the ball and replaces them.

Jonathan also excels academically. He’s enrolled in all honors classes at North Hills, is in the Junior Civitans and plays drums in band class.

Like every busy teenager, he leaves the house in the morning with a loaded backpack and duffle bag.

In addition to academic and athletic supplies, he has to remember his implants, battery packs, ear gear and other implant-related items, Spillane said.

After the Denver presentation, the two answered questions about how Jonathan navigates everyday life. Spillane said parents with a hard-of-hearing child want to hear about Jonathan’s speech quality, his success in academics and the way he advocates for himself.

“They want to see the potential of what their child could be,” she said. “… So it’s kind of paying it forward for all the help we’ve received in the past.”

After he graduates from North Hills, Jonathan wants to go to college and study engineering. He hopes to become a contractor or house flipper. Unless, he said with a smile, he shines at sports — then he’d think about becoming a professional athlete.