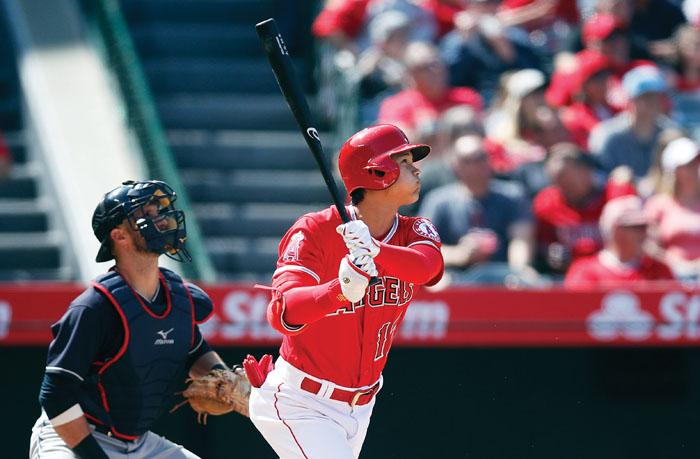 ANAHEIM, Calif. (AP) — Shohei Ohtani hit his second homer in two games at Angel Stadium in the fifth inning, and Zack Cozart had walk-off homer in the 13th inning of the Los Angeles Angels’ 3-2 victory over the Cleveland Indians on Wednesday.

One day after Ohtani hit an electrifying three-run homer in his first home plate appearance, the Japanese two-way rookie connected for a tying two-run homer off AL Cy Young winner Corey Kluber in his second game at the Big A.

Neither team scored again after Ohtani’s blast until Cozart, the Angels’ new infielder, connected for his first career walk-off homer against Zach McAllister (0-1).

Ohtani also singled leading off the 10th to go 2 for 5, giving him six hits this season and five in his only two home games. The Angels’ rookie sensation will make his first home pitching start Sunday against Oakland, one week after beating the Athletics on the road in his big-league pitching debut.

The Angels hadn’t had a walk-off homer in extra innings since Aug. 9, 2014, when Albert Pujols did it.

Noe Ramirez (1-1), the Angels’ eighth reliever, came on with two outs in the 13th and struck out Erik Gonzalez with two Indians on base.

PHOENIX (AP) — Patrick Corbin shut out Los Angeles on one hit over 7 1/3 innings, striking out a career-high 12 for Arizona.

Corbin (2-0) retired 14 batters in a row to start the game, eight on strikeouts. The Dodgers struggled to make solid contact, and it took Matt Kemp’s bloop double with two outs in the fifth to break up Corbin’s no-hit bid. Kemp had the Dodgers’ only hit of the game.

Corbin was taken out after walking Kemp with one out in the eighth inning.

Brad Boxberger earned his second save with a scoreless ninth. The Dodgers had only four base runners, two in the ninth on Boxberger walks. The Diamondbacks scored a run in each of the first three innings.

Stanton turned on a high slider from Blake Snell (0-1), driving the ball 458 feet to left field at 117.9 mph for a two-run homer with the hardest-hit ball in the major leagues so for this young season.

Acquired from Miami in December, the major league home run champion was booed a day earlier when he struck out a career-worst five times in the Yankees’ home opener.

Aaron Judge and Gary Sanchez also hit two-run homers as the Bronx Bombers lived up to their nickname. Judge connected off reliever Matt Andriese, the pitcher who gave up a home run to Judge in the slugger’s first big league at-bat in August 2016. Sanchez’s drive ended an 0-for-17 slide.

Luis Severino (2-0) allowed two runs and five hits with seven strikeouts in 7 1/3 innings, the longest outing by a New York starter this year. The Yankees improved to 4-2 under new manager Aaron Boone and won their 11th straight home series against the Rays. Tampa Bay has lost five straight games since beating Boston in its opener and is off to its worst start since 2011.

With runners at the corners and two outs in the sixth, Rosario cleared the bases with a liner over the head of shallow-playing right fielder Nick Williams to chase reliever Drew Hutchison (1-1) and snap a 2-2 tie. The 22-year-old Rosario has driven in five runs in as many games.

Mets relievers continued their strong start in a game that started 97 minutes late due to rain. Converted starter Robert Gsellman (1-0) threw two perfect innings. Hansel Robles struck out the side in his first appearance this season. A.J. Ramos pitched a scoreless eighth and closer Jeurys Familia earned his third save in three chances. Mets relievers have allowed three runs in 20 1/3 innings (1.33 ERA), and the pitching staff as a whole has 61 strikeouts through the season’s first five games.

Miguel Castro (0-1) took over for Dylan Bundy to start the seventh and walked Derek Fisher with one out. Fisher stole second base with two outs and the Astros went on top when he scored on Bregman’s single to left field. Reddick, who started the season 1 for 11, singled three times after hitting a two-run homer and a grand slam in his last two at-bats Tuesday night.

PITTSBURGH (AP) — Brian Dozier homered for the third straight game, Miguel Sano drove in a pair of runs in frigid conditions and Minnesota handed Pittsburgh its first loss of the season.

Dozier hit a drive off the top of the left-field wall in the third inning for his fourth home run in four days. Sano finished 3 for 5 and started Minnesota’s four-run rally in the sixth with an RBI single. He added another run-scoring single in the seventh. Eduardo Escobar also drove in two runs for the Twins.

Taylor Rogers (1-0) got two outs in the fifth to pick up the win.

Josh Bell hit a 432-foot home run through the snow flurries in the first inning for Pittsburgh. Corey Dickerson added two hits for the Pirates, but Pittsburgh’s attempt to start 5-0 for the first time since 1983 ended when the Twins jumped on Ivan Nova (0-1) and the bullpen in the sixth.

Davidson homered leading off the second inning, driving a 3-1 pitch from Aaron Sanchez over the left-field fence. With the score tied at 3, Abreu connected on a 3-0 pitch from reliever Ryan Tepera (1-1), sending a solo shot into the second deck in left-center field for his second home run of the year.

Brandon Belt, Brandon Crawford and Gorkys Hernandez also homered as the Giants got their bats going at last to back Cueto (1-0).

San Francisco rebounded quickly after losing its home opener a day earlier. Sandoval drew a bases-loaded walk to put the Giants ahead against Hernandez (1-1) in the first, when they also scored runs on a wild pitch and Crawford’s sacrifice fly.

Gorkys Hernandez connected leading off the second. Belt started the fifth with a drive to left. Sandoval’s drive into the water three batters later chased Hernandez, and Crawford followed with his first homer.

A 4-0 lead after four innings was more than enough cushion for the hard-throwing Martinez (1-1). The two-time All-Star rebounded from a rough opening-day start last week against the New York Mets by cruising through the Brewers’ dangerous lineup at hitter-friendly Miller Park.

Martinez allowed four hits and two walks. He retired 16 straight before Domingo Santana laced a one-out single in the seventh. The right-hander’s fastball still registered 93 mph in the ninth.

Molina hit a solo shot to left field in the fourth off Jhoulys Chacin (0-1).