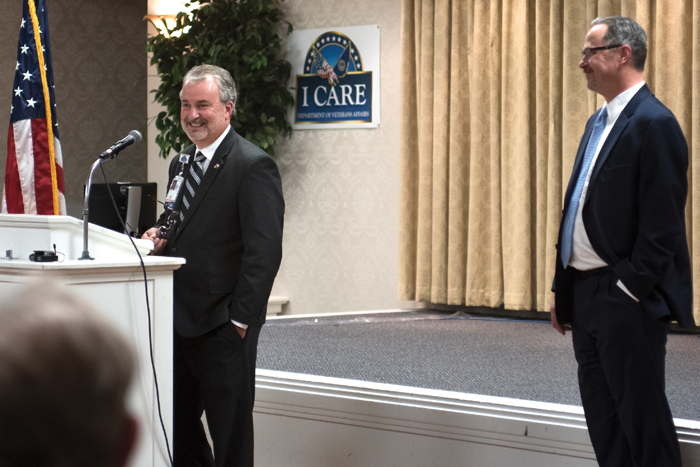 Joseph Vaughn, left, and Mark Bilosz laugh during the meet and greet at the W.G. (Bill) Hefner VA Medical Center on April 4, 2018. Vaughn is the new VA Director at the VA Medical Center. (Photo by Rebecca Benson)

SALISBURY — Joseph Vaughn stood before the public and staff members of Salisbury’s VA Medical Center on Wednesday afternoon with a consistent message: He’s listening, and he’s ready to move forward.

Vaughn, who became director of the hospital on March 19, came with nearly 13 years of experience at Veterans Affairs centers in Mississippi.

He spoke Wednesday during a town-hall meeting hosted by the VA, providing clients and concerned residents a chance to voice concerns to the director himself. He plans to hold these sessions quarterly.

“I want to have a very open-door policy, and if that’s not happening I want to hear about it,” he said. “I plan to get and stay engaged with the community.”

Vaughn was joined during the meeting by Mark Bilosz, director of the Winston-Salem Regional Veteran Benefits Administration office.

Both took time to share recent VA accomplishments and plans for the future before addressing concerns from the audience.

Vaughn said the Salisbury facility is adding an intensive care unit that will have 10 beds versus its current five. The unit should be open by the end of June, he said. He said the hospital is also moving away from semi-private rooms to private rooms on its third floor.

Other changes include the addition of more robotic-assisted surgery and the opening of the parking garage’s second floor, expected to come by the end of April.

“We’re already way ahead of a lot of VAs in the country,” said Vaughn. “We’ve got to keep pushing it and get better. … We’re stewards of the taxpayers’ money, and we’re going to be good stewards.”

Bilosz spoke of legislation that will help veterans affected by contaminated water at Camp Lejeune Marine Corps Base.

Veterans who served 30 cumulative days at Camp Lejeune from August 1953 through December 1987 may be eligible for compensation if they have been diagnosed with adult leukemia, aplastic anemia and other myelodysplastic syndromes, bladder cancer, kidney cancer, liver cancer, multiple myeloma, non-Hodgkin’s lymphoma or Parkinson’s disease, he said.

Moreover, he said another bill will take effect in March 2019 to speed up the claim appeals process.

Until the bill takes affect, he said, veterans will be contacted about the opportunity to participate in the Rapid Appeals Modernization Program, which could take appeal wait time down from years to just weeks or months, Bilosz said.

Some in the audience asked more about Rapid Appeals, wanting to know if veterans should stay on their current wait lists or switch to the new program. Bolisz said the decision depends on the case, but it could speed up the process for those likely to be accepted.

Others in the audience expressed concerns about certain aspects of care: treatment of inpatient clients, a hard-to-find nursing staff, and a phone system seldom answered or checked for messages.

Addressing concerns about client care, Vaughn said, “The lens that I look through is if it were me lying in the bed.”

He said he’s registered to receive his care at the Salisbury center, and he wants to make sure everyone receives the same level of care he would.

As for poor patient care?

“My tolerance for anything like that is going to be pretty low,” said Vaughn.

Vaughn said that administrative staff is already working to improve the center’s response to telephone calls and voice mail messages. A new monitoring system will keep track of how often and how quickly departments answer calls and check messages.

“It’s really about providing excellent care. … We’re going to own it and make improvements where we can,” he said. “… I’m holding people’s feet to the fire if someone’s taking too long to answer their phone or check their voice mail.”

Before closing Wednesday’s meeting, Salisbury’s new director said he continues to be impressed by the strides the facility is making and the community at large.

“The bottom line is I feel like I’ve made the right decision,” said Vaughn. “I’m glad to be here.”