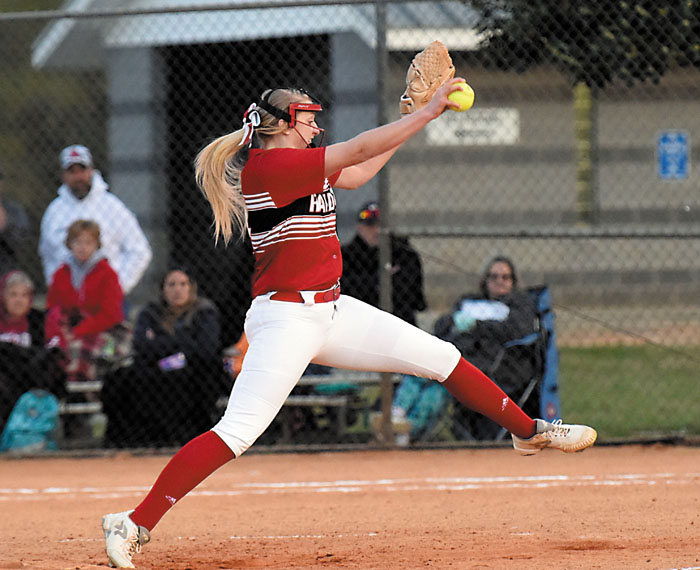 SALISBURY — It was a situation that begged for someone with Brooke Lowery’s resume.

The Catawba-bound senior and her .559 batting average was the only batter South Rowan softball coach Dean Mullinax wanted at the plate with two runners in scoring position and the Raiders trailing East Rowan by a run in the bottom of the seventh inning Thursday night.

“Brooke is special to us,” Mullinax said at Salisbury Community Park, moments after Lowery’s two-run double gave South a dramatic, 9-8 opening-round victory in the Civitan Classic. “You want someone with four years experience, with that going-to-the-next-level experience up there at that moment. That’s what they play for.”

Lowery did not disappoint. The lefty-swinging first-baseman drilled a 1-1 pitch from East’s Karley Teague to the gap in right-center field that plated teammates Ashlyn Plott and Summer McKeon and pushed South (10-4) into today’s 3 p.m. semifinal against West Rowan.

“The pitch was right down the pipe,” said Lowery, who finished 3-for-4 with four RBIs. “And when I hit it I just ran. I knew it was a base hit when it came off the bat, but I wasn’t sure it would get both runners home.”

It did with time to spare. Hard-throwing sophomore Whitley Arnott — who relieved with two away in the top of the first — was the winning pitcher. She struck out 13, walked two and allowed two hits in a 6 1/3 innings.

“We’re a scrappy team and we play until the end,” said Arnott, a right-hander who pitched with a nagging, left thigh injury. “We did what we needed to do. We got people out and we hit the balls we needed to.”

East (8-5) never trailed until the game’s final pitch, but squandered a 6-0 first-inning lead and later an 8-6 margin provided when freshman Haley Strange belted a two-run home run in the top of the seventh. The Mustangs jumped on South starting pitcher Morgan Brown in the opening stanza, collecting five of their seven hits and capitalizing on two errors. The loudest blow was Teague’s three-run homer that rocketed over the left-field fence.

“You’ve got to like the start,” said East coach Mike Waddell. “At the same time, I saw Arnott go down the side and start warming up. We knew eventually we’d have to face her. So it was get-all-we-could while we can.”

Arnott relieved and held the Mustangs scoreless for five innings while her teammates mounted a stirring comeback. South’s first run crossed on a third-inning groundout by Mataya Reynolds. Then came a five-run uprising in the last of the sixth — sparked by Lowery’s two-run single that made it 6-3 and a two-run double to right-center by Reynolds that drew South within a run. Teammate Courtney Mullins scored on a two-out error to tie the score.

“The biggest difference between last year and this year is we don’t quit,” Mullinax said. “That’s been our motto all season — don’t give up.”

East must have subscribed to the same theory because it regained the lead in the top of the seventh. With Ashlyn Fritz aboard via a leadoff walk, Strange connected on a 0-2 pitch that put the Mustangs up 8-6. South answered with three runs in the last of the  seventh — the first when Madison McGuire scored on a one-out wild pitch and the last two on Lowery’s game-winning stroke.

“Any time you give up six right at the beginning, it’s hard to battle back,” said Mullinax. “But every inning, I kept telling them to keep fighting. And they did it.”

College baseball: Freshman Butts has been key for surging…