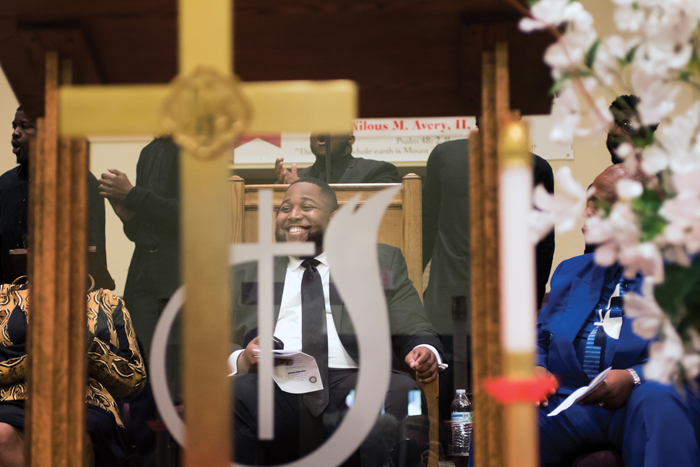 SALISBURY — Dr. Martin Luther King Jr. was shot to death outside the Lorraine Motel in Memphis 50 years ago Wednesday, but as the Rev. Marcus Fairley reminded those gathered for a commemoration at Mount Zion Missionary Baptist Church, the civil rights leader’s mission did not die with him.

Fairley, pastor of St. Luke Missionary Baptist Church in Salisbury, spoke on the topic “The Desperation of the Darkness.” He told those assembled that in darkness, sometimes people do desperate things. But he said that in darkness, there is still hope every day.

He recounted how King had been in Tennessee on April 4, 1968, to support striking sanitation workers. At 6:01 p.m., he was shot outside the motel. By 7:05 p.m., King was pronounced dead at St. Joseph’s Hospital.

“They thought that they killed him, but they really just started a revolution,” Fairley said.

He said just like the sanitation workers that King was supporting, it will take everyone to clean up the community. Fairley encouraged his listeners to learn three things — unify, have a strategic plan and have some long-suffering.

“It takes us all in the community coming together to effect change,” Fairley said.

He said those who marched with Dr. King knew what they wanted the outcome to be and, therefore, had a plan in place to get to those results. He said today’s society is about instant gratification — but some things take time.

“We have to show up when it matters, not just when we want to make some noise,” Fairley said.

“April 4 wasn’t the end, it was the beginning of a movement,” he said.

“They killed the man, but they didn’t kill the dream,” said Yolanda Woods, second vice president of the local NAACP chapter.

She said people can’t sit idly by and recount or reflect on history because there is promised land that must be reached.

Prayers were led by the Rev. Patrick Jones of New Zion Missionary Baptist Church and Pastor Leamon Brown of First Calvary Baptist Church. The Rev. Anthony Smith read a passage of Scripture from Luke Chapter 4 that talks about the ministry of Jesus Christ.

The Livingstone College Gospel Choir got many in the crowd moving in their seats and on their feet during its final song selection, “God Is Great.”

Pastor John Leazer, who was the master of ceremonies, said it is his hope that people heard what Fairley said about unity and continue to work together.

“We’ve seen a lot of progress, but we can’t stop now,” Leazer said.