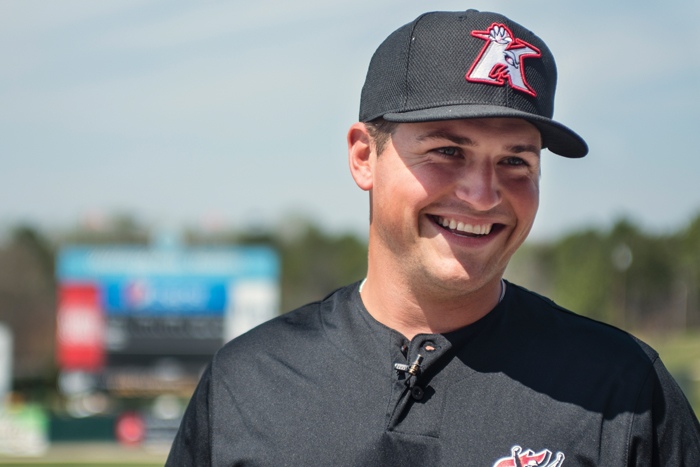 KANNAPOLIS — The Kannapolis Intimidators open their 2018 season tonight at 6:35, at home against the Lakewood Blue Claws.

The team, a Class A affiliate of the Chicago White Sox, will again play its home games at Intimidators Stadium, supported by Atrium Health, located at 2888 Moose Road, Kannapolis.

The Intimidators are members on the South Atlantic League and won a first-half division title last summer with a record of 39-29, under first-year manager Justin Jirschele.

Jirschele returns for a second year at the helm for Kannapolis. In 2017, at the age of 26, Jirschele was the youngest manager in professional baseball.

Drafted by the Chicago White Sox in 2012 out of NCAA Division III Wisconsin-Stevens Point, Jirschele played four years at all levels of professional baseball, including triple A Charlotte in 2014 and 2015. He played briefly in Kannapolis in 2013.

Although Jirschele’s overall stats as a player were decent — .277 batting average and 70 RBI in 184 games — he only hit .176 in 2015 with three different teams, Charlotte, double A Birmingham and then, single A Winston-Salem.

The son of Kansas City Royals’ third base coach Mike Jirschele, Justin gave up playing and became a coach.

Jirschele met with the media on Tuesday, in preparation for tonight’s opener against Lakewood.

“We’re excited to be out here and start playing some meaningful games and enjoy some great weather as well. We want to get under the lights and really get after it and see what happens here,” said Jirschele.

The manager couldn’t talk about individual Kannapolis players, because the White Sox were adjusting their minor league rosters through Thursday morning. But Jirschele did speak about the team as a whole.

“In Arizona, we were just getting these guys ready to go,” said Jirschele. “Spring training is a long grind for these guys — it’s a full month and you’re going every day. There’s no off days. Obviously, in Arizona, there’s no rain, so it’s full go everyday — it was all about keeping these guys healthy, but at the same time, getting them in shape and ready to go.

“We’ve got a chance to have some speed this year,” continued Jirschele. “Hopefully, we’re going to have a lineup where we can do some things on the base paths — hit-and-run, hit behind runners, do some bunting and things like that. Defensively, we should be solid and pitching-wise, hopefully we’ve got some guys who throw strikes and are competitive.”

As far as still being a very young manager, barely older than some of his players, Jirschele said that he can feed off of last season’s experience.

“It’s the same thing as last year,” said Jirschele. “Every day, I get up and I know that I have a job to do. I don’t really think about my age. My job is to run this ball club to the best of my abilities and put the most competitive team out there every possible night we can.”

NOTE: Opening night fireworks are scheduled for after tonight’s game.

This season, the Intimidators will have a new and innovative area inside Intimidators Stadium specifically designed to better accommodate and assist special needs children enjoy the ballpark experience.

Formerly executive offices, the space overlooking right field is a calm area that is free from the crowds and the noise of Intimidators Stadium. In conjunction with the kickoff of Autism Awareness Month, the space, known as ‘Cam’s Clubhouse,’ will open tonight. The space is the first area fully dedicated to being sensory friendly in Minor League Baseball.

Radle’s son, Cam, was diagnosed with Autism at an early age.

Being in a baseball family, Cam has been around ballparks since he was born. With his condition it hasn’t always been easy for Radle and his wife, Jeanine.

“However, when he would struggle, it has always been relatively easy for us to take him to a quiet area to settle down if he became overwhelmed, or inconsolable,” said Radle.

Thus the idea “to provide a safe space at our ballpark for all families to go to if they need to … a calm place, a sensory friendly space, where all special needs children would be welcomed,” added Radle.

(An upcoming Salisbury Post story will have a more in-depth look at Cam’s Clubhouse).

College baseball: Freshman Butts has been key for surging…