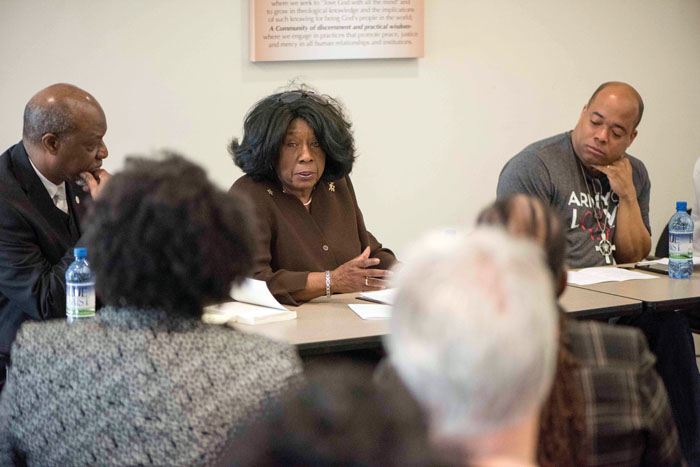 If you can’t fly, then run.
If you can’t run, then walk.
If you can’t walk, then crawl,
but whatever you do,
you have to keep moving forward.
— Dr. Martin Luther King Jr.

The first are the kind of person who assassinated King — people who still believe brutality against blacks is OK.

The second category are “liberals” willing to go along with advances in social, economic and political conditions for African-Americans as long as it is not too inconvenient for them and the cost isn’t too high.

The third category holds people who believe equality and justice are right, pure and simple.

“I don’t believe that has changed since his day,” Pridgen said during a panel discussion Wednesday at Hood Theological Seminary.

The frank conversation, which lasted about two hours, was held on the 50th anniversary of King’s death. With about 75 in attendance, the discussion took its cue from King’s book “Where Do We Go From Here: Chaos or Community?”

Overriding themes were calls for activism and collaboration, observations on the forms discrimination takes today, how far Salisbury and Rowan County have to go in improving race relations, and the insidious roots of white privilege.

“If we’re looking for apathy, we’re sitting on it,” said panelist Dee Dee Wright of Salisbury.

Pridgen said King told his audiences not to look at one person as a messiah or leader. Rather, King believed the masses of people — black and white — have to raise their consciousness to fight for social equality and justice, Pridgen said.

Panelists included Pridgen, presiding elder of the Western North Carolina Conference of the AME Zion Church; Wright, a civil rights activist since her teen years in the 1960s; Gerald Givens, vice president of the NAACP chapter in Raleigh; and the Rev. Anthony Smith, pastor of Mission House in Salisbury.

Moderators were the Rev. Marcus Fairly, a pastor and seminarian at Hood, and Gemale Black, president of the Salisbury-Rowan Chapter of the NAACP.

Salisbury Mayor Al Heggins read a proclamation from the city marking the 50th anniversary of King’s assassination. She said she became a bit teary-eyed in its writing.

“His work allows me to stand before you today,” said Heggins, who is the first black woman to serve as the city’s mayor.

Some of the panelists — Givens and Smith among them — spoke of voter suppression acts that have been enacted in recent years. Smith described them as more onerous in some respects than what was in place before the Voting Rights Act in 1965.

Givens said the NAACP remains in the heat of battle against voter suppression and the General Assembly’s attempts at discrimination through gerrymandering of legislative districts. It also is active on discriminatory issues involving the environment, immigration and military affairs, Givens said as other examples.

Integration is no longer about addressing separate schools, restrooms, lunch counters and water fountains, Givens said. Today, it’s about the need for sharing resources, responsibility and power, he said.

Givens wore a T-shirt at the panel talk that said, “Racism Sucks.”

In talking about the need to build better coalitions, Wright said activists have to be truthful to themselves first. Wright often wears a turtle pin to reflect her belief that “you only move ahead by sticking your neck out.”

In Salisbury, she said, people really don’t want to take those kinds of risks. But if you don’t have something worth fighting for, Wright said, you won’t make progress.

“We have to define our purpose, then move forward,” she added. “… I agree with Anthony — Salisbury is a different animal.”

Smith and his Mission House congregation — he likes to call members “missioners,” because they are on a mission to mobilize an Army of Love — are highly involved in efforts at community collaboration, civic engagement and addressing racial inequities.

Smith came to Salisbury in 2010, and he said, “This community has been very hard ground to plow.” In the past, the city has had individuals who were agents for change in race relations, but Salisbury has never had significant coalition building, Smith said.

He is among the people trying to change that through a “7,000 Strong” movement, and Smith invited people interested in that effort to join him.

“We have a lot of power when we collaborate,” Pridgen said.

The nation seems to be doing more lately about bringing justice and equity to women, Pridgen said. Why can’t blacks and women, who often share the same inequalities, combine forces more often? he asked.

“Together, we’ve got the votes” and the resources to move the cause of justice ahead, Pridgen said.

Givens said it was eye-opening for him to learn that of 1.5 million black-owned businesses in the country, 1.4 million are owned by a single person making an average of $70,000 annually.

Givens said minorities can’t wait for things “to trickle down” to them economically. He cited a study that said for most blacks, the wait will take 233 years to reach the average income of a white person.

Asked about equality vs. equity and what the real issue is, Pridgen said he has been dealing with and thinking about that for a long time.

“If you give me an equal opportunity to advance today, if you don’t hold me back, then I can live with that,” he said.

Smith said the level of the lack of consciousness about white privilege is startling. Using a metaphor of sorts, he said just because you have more chocolate chips at the table doesn’t mean the cookie is being parsed out equally.

Smith said he doesn’t talk so much about racism as he does systematic racism or white supremacy that took root in Europe 500 or 600 years ago.

There’s an origin to the story, he reminded the audience, and “it still has a legacy continuing today” in the nation, its institutions and corporations.

Smith said race is not in the Bible, but white supremacy and racism were created by a small percentage of white Europeans for purposes of establishing their wealth and power.

“Whiteness does not even exist,” Smith said, pausing for effect. “It’s the idea that has deadly consequences.”

Wright, who was an acquaintance of Linda Brown, the famous litigant in the Supreme Court case aimed at dissolving segregation in schools, said she would be remiss if she didn’t mention Brown, who was buried Wednesday.

“These are trying times,” Wright said, “and we have not talked about Trumpism.”

Panelists said a new era of Jim Crow comes under the mask of mass incarcerations of African-Americans, especially males.

While the local community has conversations about bringing in new manufacturing jobs, the discussion is lacking, they said, about why people of color are discriminated against when it comes to applying for those jobs.

One panelist noted that for many people — black and white — impressions of King are frozen in August 1963 and his “I Have a Dream” speech on the steps of the Lincoln Memorial.

Forgotten or overlooked is all the work leading up to that march on Washington and the almost five years of King’s activism after that.

When he was assassinated, King was in Memphis fighting for the rights of black sanitation workers.